Autumn Moon’s A Vampyre Story may not have been perfect, but for a freshman effort it was an admirable debut, delivering an assortment of offbeat characters, amusing scenarios, and an impressive wealth of interactive opportunities… oh, and some pretty decent looking graphics, if you like jaw-droppingly stylish hand-painted artwork (after all, The Aggies never lie, and now there's even a hardcover art book to prove it).

With the first game under their belts, there's every reason expect even better things to come. According to various reports, anywhere from two to four installments are planned for the full AVS experience. What we do know for sure is that the second game will be called A Vampyre Story 2: A Bat’s Tale, officially announced by Autumn Moon in March. The story picks up where the previous game ended, and introduces a host of original locations like Dr. Legume's Home for the Sanity Challenged, an Executioner's Practice Grounds, Mortus Labs, and a tavern full of beer-deprived disgruntled sports fans. There will be 25 zany characters as well – some old and some new, from The Great Fauxdini to conceited local artist Raven Gothguy to Jack the Gimper. And for the first time, players will be able to control the winged Froderick, who must rescue Mona when she falls into the clutches of the obsessed Dr. Riga Mortus.

Now the developer is on the prowl for a new publisher to help finish and publish A Vampyre Story 2, which AME reports is about 40% finished and shaping up well. And here’s hoping they soon find one, as the sequel only needs about seven more months of development to be 100% complete. In the meantime, teasing us with a small but tantalizing glimpse of what’s in store, Autumn Moon has graciously provided an enticing sample of exclusive new artwork and screenshots. And to take us deeper into the events of A Bat’s Tale, Bill Tiller and Gene Mocsy recently sat down for a banter-filled interview to discuss the nuts and bolts (in some cases like "The Mortus Monster", quite literally) of the new game. Some of the answers are even serious. 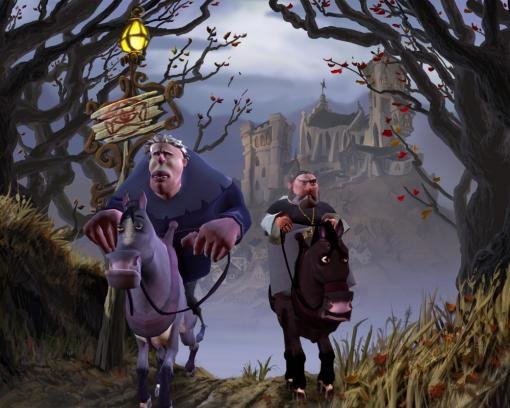 Gene: Well, we are sitting. That half is true.

Adventure Gamers: Let's make the other half true as well, then, shall we? So what changes are in store for players in A Vampyre Story 2?

Bill: The biggest changes people will notice between games is that the engine will be much improved due to the fact that the Munky Fun engineers –

Bill: – and Zeno Gerakinis at Autumn Moon – had more time to smooth it over and add new features, and we are bringing in three new additional writers to help polish the dialogue: Gene here, whose work will be featured in Ghost Pirates of Vooju Island, and two LucasArts vets, Jesse Clark and Larry Ahern. So with these moves we have hopefully addressed the two biggest weaknesses of AVS1. In AVS1 we thought the more lines the better, but now it is clear the game could have stood a bit of editing.

Bill: Shut up, man! It’s my first game, cut me some slack. Look at Telltale – Bone was good, but they really perfected their games on their second and third tries. This takes some time to get right.

Bill: You’ll get yours once Ghost Pirates comes out! If your game dialogue isn’t up to snuff, then you’ll get roasted just as much! 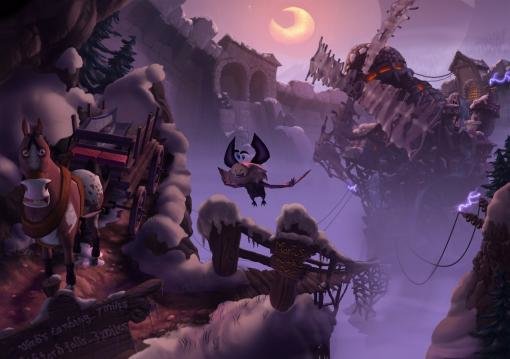 AG: Why is AVS2 subtitled A Bat’s Tale?

Bill: For most of the game you play Froderick. It just felt wrong to call it all “Vampyre Story”, when it’s mostly about a bat. He’s helping a vampire.

Gene: Why is he helping her?

Bill: Because she’s bound to a lab table by silver constraints.

Gene: I thought silver is for werewolves.

Bill: If you do you vampire research, you’ll find in a lot of books that silver restrains vampires and takes their powers. Do your research.

Gene: I would if you gave me any time off.

AG: Focus, gentlemen. According to the screenshots, there will be a werewolf and a Frankenstein monster. Who are these guys?

Bill: It’s an homage to the black-and-white classic Universal horror movies. But there are twists: the werewolf is female, and the Mortus Monster is, well, I don’t want to give it away, but something interesting happens to him.

Gene: And there’s a mad scientist.

Gene: And a zombie.

Bill: God, just give away the whole game. Yes, there’s a zombie. In this game, Froderick gets to do a little mad scientist work himself to create an assistant to rescue Mona. But I don’t want to give away too much. Unlike Gene. 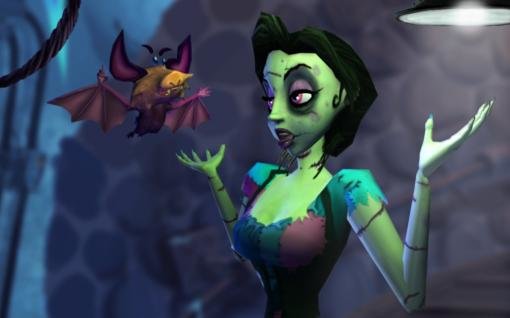 Gene: So why is it that you made a lot of them female? You have a female zombie, a female werewolf, and a female vampire.

Gene: Are there any female bats?

AG: Just for the record, we’re big fans of Gene’s “give everything away” approach, but don’t let that influence you at all, Bill. Also, Mona as a bat was absolutely adorable. “Sexy” is a stretch, but she had class. But next question: Does Mona get to Paris at the end of this game?

Bill: No, not in this one. Mona’s plans were interrupted by people who want something from her. She can’t understand why people won’t just leave her alone. She’ll ultimately get on the ship to France at the end of this game. It’s like The Odyssey. It took Ulysses, like, 20 years to get home.

Gene: So can we get a Cyclops?

Bill: Sure, great idea. Get right on that. Knowing you, we should have sexy sirens.

Gene: Doesn’t bode well for Froderick. Everyone dies when you ride with Ulysses. So anyway, Mona gets to Gothford Falls…

Bill: Yeah, she needs to find a guardian. Madame Strigoi insists Mona find a daytime guardian to protect her from her enemies. Something Froderick and Mona resisted last time. So it’s a clear case of haste makes waste. If you’re gonna do something, do it right, or don’t do it at all.

Gene: So was your strategy, taking five years to make AVS1?

Bill: Thanks for bringing that up. Look, we officially didn’t start that game until we got funding, right? So that wasn’t until ‘06. Yeah, we may have jumped the gun on announcing that one, but we needed funds. 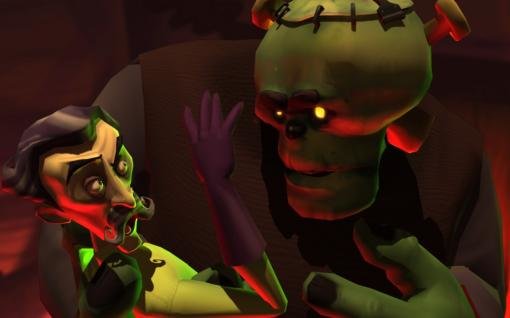 AG: We're happy to help you find one, but right now you actually need to tell us about Gothford Falls. That was the home town of the rivals of Vlad’s Landing in AVS1, correct?

Bill: In her quest to get the Stoker kids to sleep in AVS1, Mona had to drain the blood out of Gothford Falls United’s star player. And that has a big consequence in AVS2. Mona has to deal with some of the stuff she did in the previous game.

Gothford Galls is a cute little town built on a bridge that spans the falls, thus the name. The villagers are very suspicious of their local scientist, Dr. Riga Mortus, and Froderick takes advantage of their fears to help Mona out. There will be a torch-wielding riot. Gotta have that.

Unfortunately for the mob, Riga Mortus is one step ahead of them and bought up all the pitchforks, torches, and hoes in the area. That puts a huge damper on their plans.

There will be a riot, but it’s not gonna be as easy as Froderick thinks.

AG: Besides the two protagonists, will there be returning characters from the previous game?

Bill: Yeah, there’s gonna be quite a few. In AVS1 we set up a lot of story arcs that conclude in the second game. Some of them are Edgar Raven, the Woman of Low Moral Fiber (WOLMF), and Mina and Bruno Stoker.

Gene: Is there a sense of morality that punishes or rewards these characters?

Bill: No, not really.

Gene: The WOLMF helps Mona out a bit. But I can’t say more or Bill will hit me. 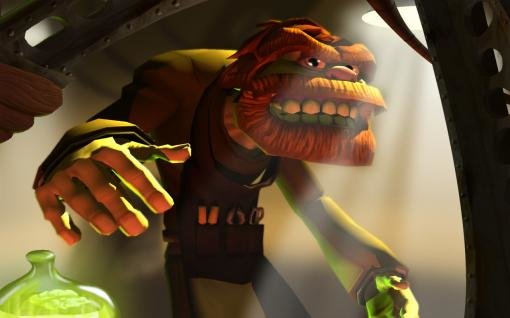 AG: Did you know vampires were going to be so hot this year? Not just in games, but in Twilight and True Blood, for example.

Bill: Yeah we planned that. We had some inside information.

Gene: When are vampires not popular?

Bill: Dracula is just about the most popular character in fiction.

Gene: Who do you think would win in a fight? Mona or Dracula?

Bill: Mona, for sure. She is a woman on a mission. Dracula’s just looking for food. He’s just out grocery shopping. Plus Froderick comes in handy in a fight. What’s Dracula got? Nothing. No helpers.

AG: If Mona is a vampire, is she immortal? Could she be alive in the 21st century?

Gene: Do you watch opera?

Bill: Heck no, that crap is boring. Yeah, if I wanna go to sleep. Few hours of Carmen, better than Ambien, anytime. 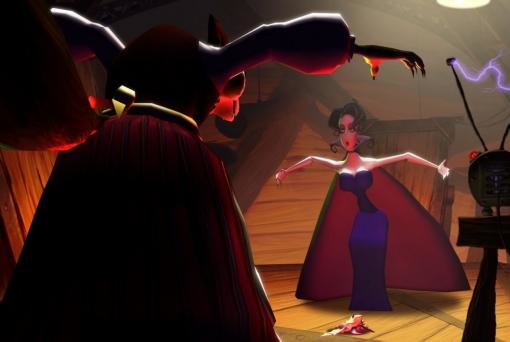 Bill: So we’re looking for a publisher. We can give them more detailed information about the game if they contact us at [email protected].

And for the fans out there, check out screenshots and info at www.avampyrestory2.com.

AG: Thanks, guys. All the best in the publisher search, and we’re sure it’s only a matter of time before one of them sees all the potential the rest of us do.

Don't go away yet! The show isn't over until the skinny lady sings. Click ahead to the next page for more exclusive screen shots, character art, and concept sketches for A Bat's Tale. (Note: all images can be clicked on for larger views.) 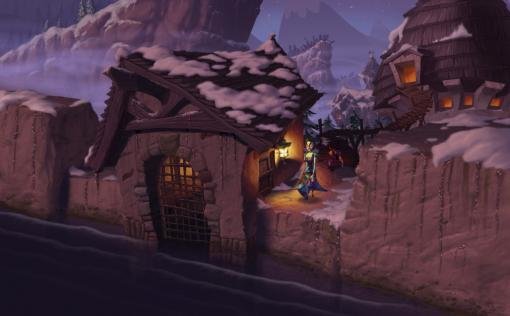 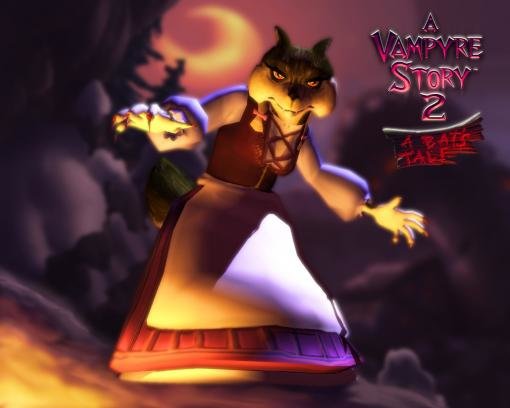 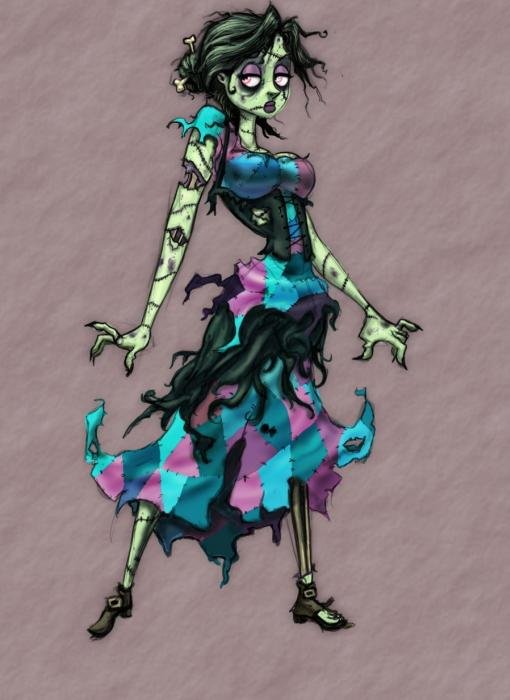 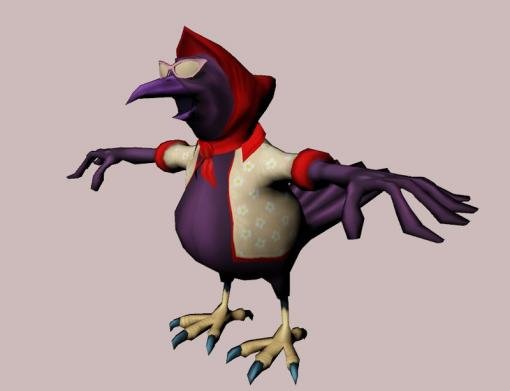 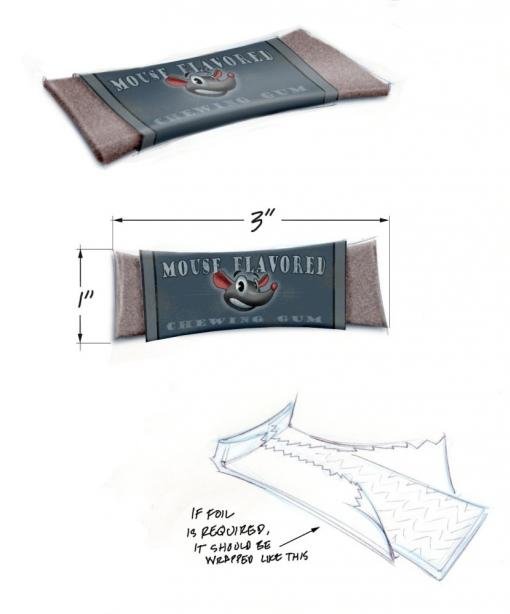 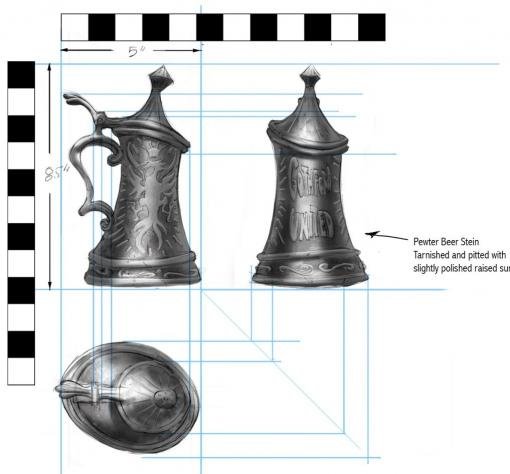 A Vampyre Story 2: A Bat’s Tale 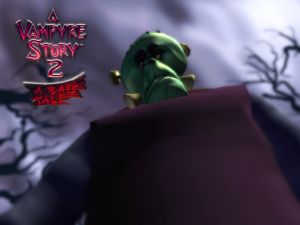 All A Vampyre Story games (series/episodes)
» Discover other games

daniel_beck_90
Very nice interview , I enjoyed playing AVS1 very much and can not wait to get my hands on the second game . However, lack of a publisher is indeed a serious challenge for Autumn Moon Entertainment .

Vina
They're getting one of the head writers of Curse of Monkey Island? My anticipation for this game just tripled.

dark_ixion
I wish they'd start making these games available for Linux. I can't play them :(

Mikane Zaprick
The only problem I see is that the "two biggest weaknesses"... were very minor weaknesses, IMO. So minor in fact that I didn't even get to experience them, because the biggest weakness was that the game was not a game at all. It was - as with many too many products these days - a tedious push-me, pull-that, here's-a-hammer-wonder-what-its-for?-you-needn't... handholding exercise in (apparently) lame picturebook story telling... Please, address the fact that some of us still want to be challenged by something more than an endless stream of idiotic guntotes or an endless stream of idiotic nonchoices... Please! Somebody make a game.

oerhört
Looking forward to this one, even though I haven't worked my way through the first game yet it's heartening to hear that they take the issues of AVS seriously.

Thello
I'm glad Tiller is acknowledging the weaknesses in the writing in AVS, and I'm happy he's letting Ahern and Co. handle the dialogue. Maybe I'll be able to play this one to completion.

Jackal
Just tightening economic times. I've heard nothing but positives about the previous partnership, but the money will need to come from somewhere else this time.

Diduz
I'm sorry, but there's something I don't get here. The preview is great, I'm looking forward to AVS2, but... what happened to Crimson Cow? Wht did they decide to stop funding the series?
Advertisement
archived preview