What comes to mind for most people when they think of Oz is the 1939 movie starring Judy Garland, with ruby red slippers, sickly green witches, and a musical number for almost every character. Even if one realizes it was based on a book, and even if they read that book as a child, they may not know that L. Frank Baum wrote an additional 13 books about Oz, introducing dozens of new places and scores of other characters. Game designer Dave Gilbert knows, however, and it’s clear that his new game Emerald City Confidential shows a rigorous devotion to its source material (e.g. Dorothy’s hair is blonde, and the Wicked Witch of the West isn’t green). The familiar folks everybody loves all make an appearance—the Scarecrow, the Tin Man, and Toto too—but we also get Hank the Mule, Cayke the Cookie Cook, Kiki Aru, and many more. I consider myself a dedicated Oz fan, yet I still had to reach many times for my trusty Who’s Who in Oz for a refresher on some of the 30-plus characters. But for those less versed in the merry old land of Oz, there’s no reason to worry, as ECC isn’t merely fan service for Ozites, and no background knowledge is necessary to follow the story—anyone can jump in and enjoy this well-written, well-acted, noir-lite adventure.

To make things even easier for the Oz neophyte, the main character is completely original. Petra is a private detective and a disgraced ex-member of Queen Ozma’s Royal Guard, having abandoned her post in the middle of the Phanfasm War to fruitlessly search for her little brother. Emerald City has lost some of its luster since the war, particularly after Ozma outlawed magic use for all but a select few. Similar to prohibition in the United States, this has led to an increase in magic-related crime, especially smuggling. Our story begins with Petra being hired by a certain Miss Dee Gale to search for her fiancé Anzel. Miss Gale is an honorary Princess of Oz, and is therefore allowed to use a magic device to track people. She knows Anzel returned from a trip north two nights ago, but now he seems to have disappeared.

Petra’s journey will take her all over the Emerald City and beyond, and bring her face-to-face with many unscrupulous characters, like Frogman the mob boss, Jack Pumpkinhead the smuggler, and Cowardly Lion the sleazy lawyer. Emerald City Confidential advertises itself as a crime noir take on the Oz universe, but it’s more soft-boiled than hard-boiled. There’s plenty of corruption, and even the most beloved of classic characters make the wrong choices for the wrong reasons, but you won’t find any gun violence, brutal assaults, murders, or any of the other awful things that characterize crime noir at its bleakest. This is a game you can play with your kids, as long as you don't mind them developing a healthy distrust of authority. 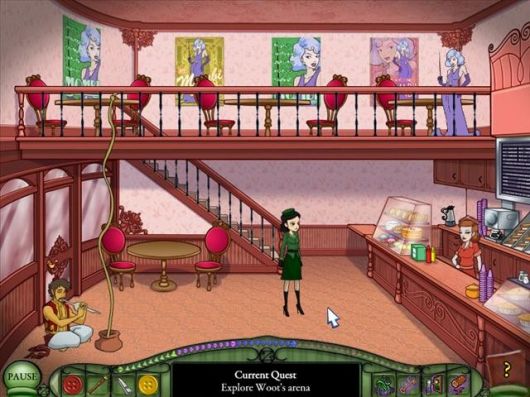 The storyline and characters are without a doubt the game’s major strong suit. Petra is interesting and likable, the dialogue is generally well-written, and the ancillary characters have enough personality to be memorable. The story deepens steadily as you go, until the very fate of the Kingdom hangs in the balance, with plenty of twists and turns to keep you guessing. Some of the plot reveals are a bit obvious, and there are a few moments where characters arrive at new information seemingly from nowhere, but on average, the story works. You’ll find yourself invested in where things are going, even if you’ve never cracked the covers of an Oz book in your life.

If the reverse is true, and you love Oz but are inexperienced with adventure games, you’re covered here as well. The interface is all controlled with one mouse button, which will automatically either examine, use, take, or talk depending on what you click on. The bottom of the screen shows your inventory items, which you can select and apply as needed, though unfortunately you can’t bring up the items themselves to examine more closely. You’re told from the very beginning that you can’t die or do anything wrong, so there’s no harm in experimenting. That’s a very good thing, since there’s also no way to manually save or load your game. It automatically saves when you enter a new screen, and you just choose “Resume” the next time you play. It would be nice to have more control, because I usually want to quit once I’ve exhausted everything to do in the current screen—if I’ve already entered a new screen, I probably want to keep exploring.

The simplified save system isn’t the only nod to casual gaming. Concept art can be unlocked by finding little hidden buttons in each screen and trading them in to Scraps the Patchwork Girl. The art is nice enough if you’re interested in that kind of thing, but if not, the button search is easily ignored. You’re also explicitly told what your next goal is, and each time you’ve completed one, a colored gem is added to a little empty row of jewel settings along the bottom of the screen. Keeping track of the little pieces that make up the big picture is easy thanks to an automatic journal Petra keeps, which also functions as your unlimited hint system. If you’re stuck at any time, go to that journal entry and click Hint, and it will gradually reveal more and more info about what to do next until eventually it straight-up tells you. 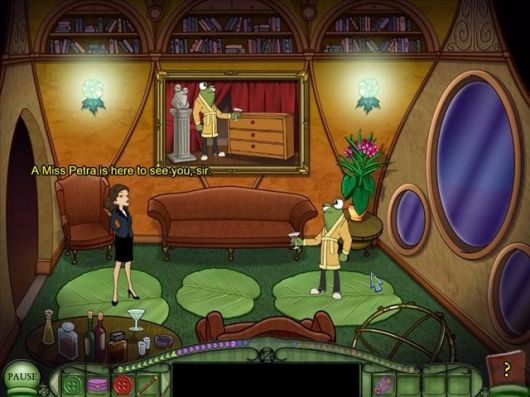 If you’re an experienced adventure gamer, you’ll probably use the hint system rarely if ever. You’ll get pretty deep into the second half of the game before you really have to break out your thinking cap. All the puzzles are variations of applying your inventory to the selectable areas of the screen, and if worst comes to worst, there’s no harm in just trying every combination until one works, though most situations are straightforward enough that this approach isn’t necessary. Interestingly, unlike many adventures which have lots of single-use items, there are several items in ECC that you’ll use multiple times but in different ways. There aren’t any logic puzzles, mini-games, or action sequences, and the vast majority of progress is made via traveling back and forth between characters and working through dialogue trees. This isn’t a puzzle game with a story, this is a story game with puzzles.

The story is easy to enjoy, as the voice acting ranges from acceptable to very good. While many modern adventure games seem to wield voice acting as a weapon against your unsuspecting ears, my biggest complaint with ECC’s voice acting is that there’s not enough of it. Every non-playable character is fully acted, including Petra’s dialogue, but most of the scenery and item descriptions are simply words on the screen. The only time you’ll actually hear Petra talking about something in the background is when it’s very important to the story, while the few pieces of nonessential set dressing on each screen are narrated silently. I became so fond of the actress playing Petra, it would’ve been nice to hear her give voice to all of Petra’s inner thoughts, not merely a fraction of them. 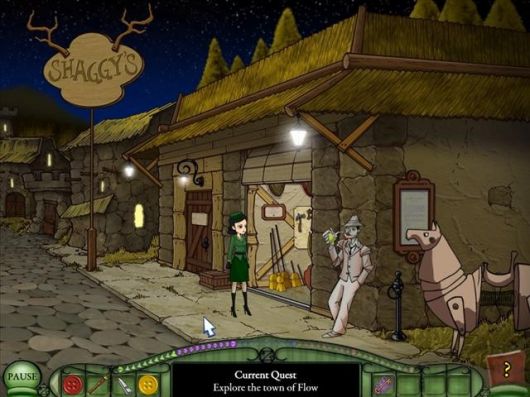 If the voices don’t endear you to the characters, the art design might. Every Oz character adaptation has been redone to combine the bright, cartoon-style you’d expect from children’s fantasy with a noir twist. The major characters still share a lot of characteristics with their counterparts in the novels, but if you’re a super-purist, you may be perplexed with how radically minor characters have changed (Ugu the Shoemaker is Ugu in name only). You’ll visit pumpkin patches and palaces, bars and boxing rings, and all are well-drawn and bright, and it’s easy to discern one item from the next. Unfortunately, the animation is rather poor. It feels like there are frames missing sometimes, causing characters to move in a jerky manner. Other times, they seem to float along the pavement, looking more like Colorforms stuck on a flat background than living, breathing characters inhabiting a world.

Your visit to the Kingdom of Oz will last around 6 to 8 hours, depending on how carefully you explore each area and how tempted you are to check your journal for hints. Most adventurers will find the journey time well spent, though how much depends on what kind of gamer you are. If you play adventure games because you love characters and story, you’ll almost certainly enjoy ECC; if you play them to experience a real brain-bending challenge, you might find the puzzles too simplistic. On the other hand, if you’re a fan of L. Frank Baum’s original Oz books, then no matter what kind of gamer you are you’ll want to click together your silver shoes and say “There’s no place like Emerald City Confidential.”

If ultra-challenging puzzles are your thing, you might be disappointed, but if you’re all about the story and characters, you should book a trip on the next available cyclone to beautiful (and dangerous) Emerald City.

GAME INFO Emerald City Confidential is an adventure game by Wadjet Eye Games released in 2009 for PC. It has a Stylized art style, presented in 2D or 2.5D and is played in a Third-Person perspective. You can download Emerald City Confidential from: We get a small commission from any game you buy through these links.
The Good:
The Bad:
The Good:
The Bad:

What our readers think of Emerald City Confidential

This is a great noir-inspired adventure game set in the land of Oz created by L. Frank Baum. Its presentation is like a tribute to classic adventure games from the 90s—but with a modern logical... Read the review »