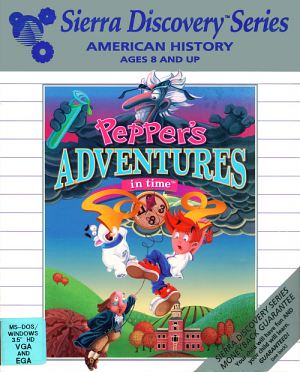 We get a small commission from any books sold.
All Bitmap Books
Written by
Andrea Morstabilini — March 5, 2010

Can you imagine Benjamin Franklin kicking back in a luxurious hot tub, covered in love beads and sequins? Can you envision the Liberty Bell carried around by Hare Krishnas in long yellow robes, and the most promising youth of 18th century Philadelphia transformed into a razzle-dazzling party of hippies? Or how about the old groceries of yore selling tofu and macrobiotic food instead of bread and cheese? I could go on, but I highly doubt that you can indeed conceive of such whimsical and absurd scenarios. Unless, of course, you’re already familiar with Pepper’s Adventures in Time, featuring a certain Uncle Fred and his evil plan to reverse American history by means of a machiavellian time machine. With such a dysfunctional old uncle, not to mention absent-minded parents, it’s up to Pepper Pumpernickel – a young, red-haired tomboy as spicy as her name suggests – and Lockjaw, her fierce (ahem) hound, to set things right.

After the two EcoQuest games, in 1993 Pepper’s Adventures in Time became the third full-fledged adventure in Sierra’s Discovery Series, a line of educational games aimed at children and young adults with the goal to “create the ideal learning environment; a time and place where learning can be fun.” Produced by Sierra veteran Mark Seibert and co-designed by Lorelei Shannon, Jane Jensen, Gano Haine and Josh Mandel, Pepper was entirely written by Shannon and the game shows the huge amount of research she undertook to thoroughly detail American history and lifestyle back in the colonial times. The game manual, cleverly named “The Life and Times of Ben Franklin”, is not only full of useful and interesting information about the period, but also includes a glossary of the most difficult words a child might stumble upon during the game, a precise chronology of Mr. Franklin’s life, and an abundant bibliography which cites the wide range of sources that served as background. These include the writings of Franklin himself (particularly the Poor Richard almanacs) to historical essays about George III of England, scientific breakthroughs of colonial time and the drafting of the American Constitution.

What is really amazing is that this wealth of historically accurate information never stifles the pacing of the story, but rather enriches the otherwise crazy plot and gives the game a unique feel. From the moment in which Pepper falls into Uncle Fred’s time machine until the end of her history-twisting adventure, players will be utterly engaged by the vastness and variety of the obstacles she must confront, the outrageous characters she meets, and above all, by the depth of the many situations she faces. When old wicked Fred set his device in motion, colonial Philadelphia’s customs were corrupted by a massive dose of Mellowness, a distorted version of the peace and love philosophy so popular during the 1960s and ‘70s. With Benjamin Franklin predicating the wonders of idleness and relaxation – “Chill out!” has become one of his most renowned catch-phrases – and the townsfolk discovering alcohol, parties, illegal gambling and sweet do-nothing, the pompous General Pough is left free to over-tax the citizens and then use their money to buy expensive wigs for himself and pricey dolls for his insufferable little daugther Ima. Only a few people in town are trying to resist both the Mellowness and the unfair taxes, but it is up to Pepper to urge Ben Franklin out of his jacuzzi and send him back to work. 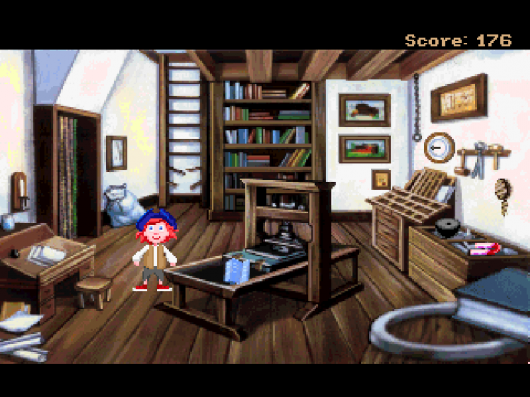 How can this absurd plot blend so well with the well-researched historical background? Thanks to the “Truth” icon. Specifically created for Pepper, this icon allows the player to investigate, with a simple mouse click, the historical accuracy of every object, location or character presented on screen. Every answer is followed by a thorough explanation, and this is where Lorelei Shannon’s witty writing truly shines, because in these descriptions she managed to be both informative and entertaining, making them a real pleasure to read. The crazy, over-the-top dialogues are the perfect icing on the cake: every character has a distinct, well-rounded personality and every line is not only full of wisecracks and puns, but also permeated by a dark humor often more suitable for adults than children. The Doctrine of the Mellowness itself is an ingenious storytelling gimmick and an inexhaustible source for trenchant remarks which serve to emphasize the historical truth that Pepper is trying to restore.

The cartoonish graphics, vividly colorful and bright, perfectly match the absurdity of the plot. The environments sport a shiny quality, with huge, rotund red trees, sparkling green fields and clear blue skies, and the hand-painted character portraits show a good range of facial expressions and add a very peculiar atmosphere to the whole game. Each location – and there are plenty of them, from the outskirts of Philadelphia to the Governor’s opulent mansion to Franklin’s stark residence – is filled with funny animations: on a scenic hillside, a couple of brothers play frisbee next to a quarrelling couple, while in the town square, smoke rises from the chimneys and a lonely gambler throws pebbles in the air, in the occasional company of a goat (!). Better yet, every screen has its own particular musical theme that fits well within the main orchestration by Neal Grandstaff and Mark Seibert, which is amusing and quite memorable overall. The main motif is so involving that I found myself whistling it for several days after the end of my playthrough, and it has the uncommon quality of never becoming annoying, even with a great deal of repetition.

Pepper’s Adventures in Time was one of the last adventures to use SCI1.1 and was released on CD and floppies both for DOS and Windows 3.1, without any noticeable difference between the two versions. Both of them use the standard Sierra point-and-click, icon-driven interface, and aside from the Truth icon, there is only one change. In some predetermined moments of the adventure, players will be able to control Lockjaw, Pepper’s dog, and in these segments, all the icons are accordingly modified. Lockjaw can smell and bite things, and these particular actions are always nicely integrated into the gameplay, to the point that some puzzles can only be overcome by taking full advantage of these canine abilities. The game is divided into six acts and at the beginning of each chapter, the player is presented with a useful list of things to examine and goals to achieve. This list must be read carefully, because at the end of each act you’ll have to answer quizzes concerning the acquired information and the completed tasks. These questionnaires serve no other purpose than achieving a full score, and they were clearly implemented for children, so for a seasoned adventurer they are nothing but an unnecessary nuisance that abruptly interrupt the pacing of the game. 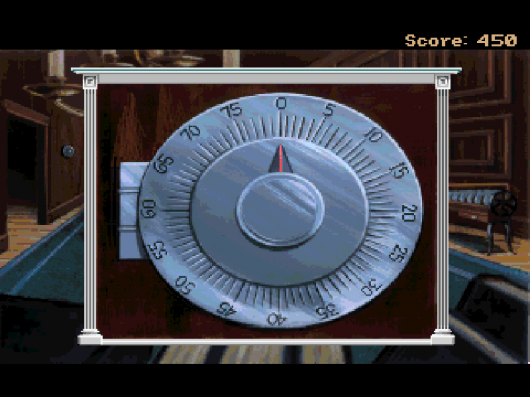 Aside from this minor blemish, the gameplay is solid and cleverly entertaining. The puzzles show a welcome variety, and while never impossible to overcome, they nonetheless offer a reasonable challenge. Pepper’s inventory is quite capacious but it’s unlikely that you will carry more than eight or nine items at a time, making the inventory puzzles quite straightforward. The same can be said for the many fetch quests Pepper has to fulfill, though once again, thanks to the brilliant writing they never feel stretched or contrived; on the contrary, they help deepen the plausibility of the setting and the background of various characters. Things get a little more complicated – bearing in mind that this game was primarily aimed at young adults – when dealing with scientific challenges such as a Leyden jar electrical experiment, but the manual always comes to the player’s aid as a fully functional copy-protection measure that is necessary to solve certain situations. Luckily, these puzzles never feel out of place, because they are so smartly integrated that referring to the manual seems only natural. It should also be noted that there are a couple of timed sequences during the game: they never require hand-eye coordination or fast reflexes, but simply quick reasoning. Although they aren’t by any means frustrating, if botched they will result in a game over screen. There is no need to worry though, since there’s a practical “Try Again” feature that restores the game right before the fatal error.

Pepper’s Adventures in Time, while not comparable in difficulty to Sierra’s other games of the same period, is surely harder and longer than the EcoQuest games. A seasoned adventurer may finish the game in a dozen hours, and for a child or inexperienced player the journey will last even longer. Regardless of one’s experience, however, Pepper is an adventure not to be missed by anyone. Thanks to its brilliant writing, captivating plot and lovable, over-the-top characters, this game is perhaps the diamond point of the Discovery Series, and the only disappointment I can find is that a sequel was clearly hinted at in the ending sequence but sadly never produced. On a personal note, I’m not American and I’ve only learned about Benjamin Franklin and the Revolution in my History classes, but thanks to Pepper’s Adventures in Time, I now know more things about the colonial times than any course book could ever teach me, including in-depth knowledge about lifestyle, social customs, architecture and much more. Add to this educational value an intelligent gameplay, clever puzzle design and amusing writing, and this time-twisting adventure is really a classic for all ages.

Pepper’s Adventures in Time is not only a great educational game for children and young adults, it is a classic adventure game for all ages.

GAME INFO Pepper’s Adventures in Time is an adventure game by Sierra On-Line released in 1993 for PC. It has a Comic cartoon style and is played in a Third-Person perspective.

What our readers think of Pepper’s Adventures in Time

very well implemented educational adventure for kids. i'm uncertain about 'for all ages' appeal tho.

I was surprised to find this game in the Adventure Gamers' list of Top 20 Adventure Games of all time (at #19). So I thought I'd check it out even though, as an educational adventure... Read the review »