continue reading below
»   Home  /  Articles  / Reviews  / Duty and Beyond review

Duty and Beyond review

We get a small commission from any books sold.
All Bitmap Books
Written by
Jason Turner — February 4, 2009

While perusing the Adventure Game Studio award winners recently, I came across the game Duty and Beyond, by Mordalles. It's strange that I'd heard so little about this game, as it won awards for both Best Puzzles and Best Gameplay in 2006, which is a pretty significant accomplishment for any game. Because of its award-winning status and distinctly retro-styled graphics, my wife and I decided to give it a shot together, and we didn't regret the choice from start to finish.

While Duty and Beyond may be noted for its puzzles, the story really took us by surprise. It starts with a cutscene showing the protagonist cruising down the highway on a motorcycle. The gameplay begins when the playable character, Piet, arrives at his destination to make a delivery. However, the mysterious customer is nowhere to be found, and you decide you must follow through with this delivery -- it is your duty. Deciding that sneaking into the customer's house is a perfectly reasonable thing to do to complete your job, from that point on the plot takes on many unpredictable twists.

The overall story arc is fairly linear and consists of four quests which must be completed in order to obtain four different items. Within each quest, however, there is much more freedom to the order in which puzzles may be solved. In fact, it is even possible to "accidentally" end a particular quest early. It wasn't obvious to either of us that obtaining the object we were searching for would immediately bring the quest to an end, making it impossible to further explore the location. Therefore, we failed to solve one puzzle in the first quest which prevented us from solving additional puzzles in later quests. While that didn't stop us from finishing the game, it did prevent us from obtaining all possible points. 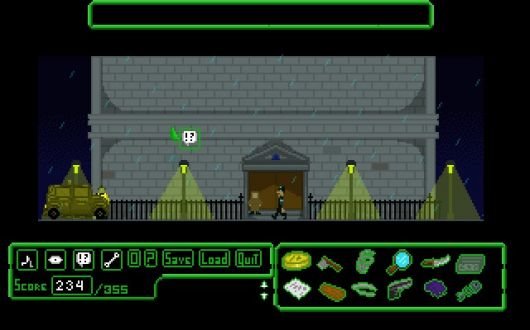 About half of the puzzles have a clear sequence of events that need to occur. Some of them take real thinking, and paying attention to clues and object descriptions can be important. There are no mazes to speak of, but some of the locations themselves are fairly elaborate. Puzzles are almost exclusively inventory-based in nature; some are simply fetching or showing items to other game characters, while others require you to use items on objects in the environment, and still others involve a combination of inventory items. Even though the types of puzzles are not unique, the author managed to put them together in particularly creative ways without being esoteric. For example, in one scenario you must get to the front of the line at a bureaucratic office to get some paperwork approved, but there are three people in front of you. Each person has his own needs that you must meet in order to clear the line out for yourself. While the needs of each character are unusual, the puzzles provide you with a clear set of objectives and a reasonable motivation. Unlike some games where puzzles exist merely for puzzles' sake, the challenges in Duty and Beyond make sense within the context of the game.

The graphics are decidedly mid-1980s King's Quest I quality, which perhaps explains why this game doesn't get the same attention that better looking games have received. The resolution is only 320x240, which is not unusual for an AGS game. What is unusual is that the developer chose to use a very limited set of colors and to make very small game items with limited detail. In this aspect it models the earliest graphical adventure games. As it was made in 2006, I expected more "modern" graphics, even by independent standards. At first the visual quality was jarring, and it took me about ten minutes to accept it. A half hour later and I found it had somehow taken on an endearing quality, eliciting fond memories of the first graphic adventures I played. My wife, on the other hand, found the design comfortable and familiar from the beginning.

The low-res graphics do present a bit of a pixel hunt problem for some puzzles. A few times we found it easy to overlook game elements that were critical to a puzzle. At one particular point, when trying to click on a fallen acorn, the acorn was represented by a single pixel and it took a few tries to be able to click on it. This acorn at least offers the advantage of seeing it fall to know you should be looking for it, but there was one other incident of a very non-obvious single pixel object that we had to look up clues to find. 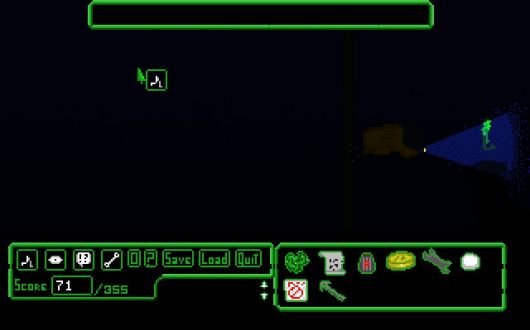 An interesting aspect of this game that I had never seen before is that rooms are all laid out as purely two dimensional. That is, you cannot move your character front and back at all, only left and right within a scene. The game also makes creative use of room sizes and positions on the screen to give a unique sense of scale and relative positioning. The developer states that Duty and Beyond contains 140 rooms, which seems quite believable. By our count it has at least eight distinct locations, varying between indoor and outdoor locations from Egypt to London to undersea adventures. Considering this is a quest to deliver an item to a customer's house, the variety of locations was totally unexpected. The graphic limitations can make the locations feel a little shallow, leaving your imagination to fill in the details. However, due to the welcome variety, you don't tend to dwell on the lack of visual detail for long.

The characters, like the locations, end up feeling a little shallow as well. In this case, the reason is simply because of the lack of actual development. For the most part, interactions with others are limited to what is necessary to solve puzzles. What the game lacks in character depth, however, it makes up for in number. Through the course of the game you interact with the likes of a race of fish creatures, a mermaid, a fairy, ogres, a thief, a traveler, policemen and many others. One particular quest represents the exception, with a few characters that provide significantly more conversation than at any other point in the game. The characters in this scenario are highly welcomed and add an extra layer of substance to the game that isn't there otherwise. There is even one puzzle where you actually become and control another character for a short time.

Your own character, Piet, provides a running commentary throughout the game and is the source of a fair bit of humor and self deprecation. The game is lighthearted in tone, with several adventure genre inside jokes, and is even able to poke fun at itself, mentioning how something would look better if it wasn't such a "low res" world. There are also numerous mentions of "blue cup" (referencing the Big Blue Cup website which hosts the extensive AGS games database) for which you should keep your eyes open. 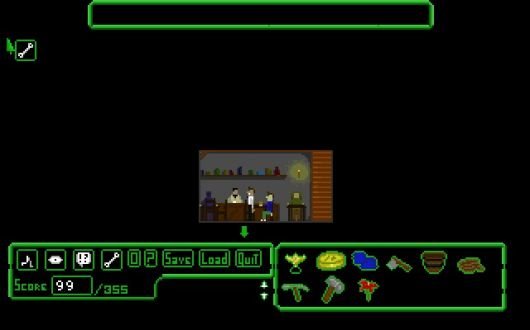 Duty and Beyond shares interface elements with most other AGS-developed games. The point-and-click controls should be familiar to anyone used to the old Sierra adventure games and is relatively intuitive. To move around or look at and interact with objects, you can either choose the action you want to perform from a set of icons or right-click the mouse to choose the next possible action. Any complaints with the interface are minor, such as not being able to "walk" through an exit, instead being required to "use" it. Also, there are a few rooms where your character stops walking one or more times in the middle of the room and you are forced to click the "walk" action again to keep moving forward.

As far as audio goes, there is not much to say. The game has some older style synthesized instrumental music that matches the level of graphics perfectly. Like most Underground games, there is no voice acting in Duty and Beyond, but the background music does provide the appropriate ambiance.

The ending of the game is as much a surprise as the rest of the plot, and if you are like us, you will be compelled to play all the way through just to find out what is going on. However, if you miss something early on like we did, you may be a little disappointed to discover that you're missing out on the full ending scene. For this reason, I suggest you save at fairly regular intervals so you can backtrack to complete missing elements if you accidentally finish a quest prematurely and want to experience all the game has to offer. 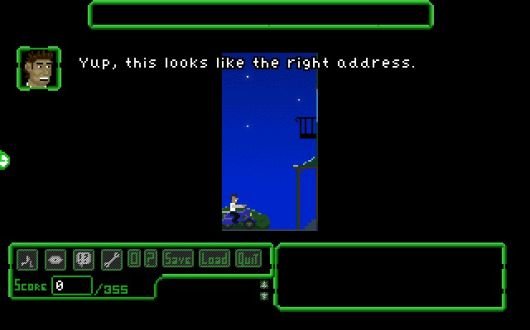 There is only one minor bug in the game that we found, where in one scene no matter what we did we could not get the dialog to display slowly enough to read. This problem only happened once, but it does obscure a potential clue if it is not obvious to you what should happen next. If family friendliness is a concern for you, I should mention that there are a couple of minor sexual innuendos and some cartoonish violence. We found these incidences to be of no major concern, and indeed with the style and resolution of graphics used, any questionable content comes across as comic.

Despite the relatively shallow characters and graphics that may take a little getting used to, Duty and Beyond is a game I highly recommend. Production values aside, the game is on par with many of the commercial games we have played and even outshines some of the most recent. The puzzles are excellent and the game length is perfect, providing us with about six hours of play time. Even the retro feel of the game proved a welcome change from all those titles that come to feel like more of the same, so if you're up for something a little different, consider it your adventurer's duty to give it a try.

Duty and Beyond can be downloaded from the AGS website.

What our readers think of Duty and Beyond