Ben There, Dan That! review

We get a small commission from any books sold.
All Bitmap Books
Written by
Luke Jensen — February 28, 2009

Science fiction and comedy have always been two of my favorite genres, but except for games like Space Quest, few adventures have effectively combined the two in an interactive experience. Fortunately, Ben There, Dan That!, developed by independent team Zombie Cow Studios, provides a unique and hilarious addition to the library of any gamer looking to satisfy their appetite for another take on the partnership.

The game, coded in AGS and written by Ben Ward and Dan Marshall, puts players in control of two characters also named Ben and Dan. The young London roommates are likable and dynamic, even if their day-to-day existence seems a bit boring. However, that boredom doesn’t last; they are soon mysteriously transported aboard an alien spaceship and spend the majority of the adventure trying to return home.

To help them get back to their normal lives, players guide Ben and Dan through a series of seven otherworldly dimensions. Each dimension—from a universe where Britain has annexed the United States to a world covered in molten lava—is entered through a door off the ship's main hallway. But it wouldn't be an adventure game if they were able to open them easily; each door—including the one back to Ben and Dan's apartment—is triggered using an item found in another dimension. It's this “domino effect” quest for items that forms the basic gameplay in BTDT, interspersed with several cutscenes that follow the pair's alien abductors and explain why our protagonists have been captured. 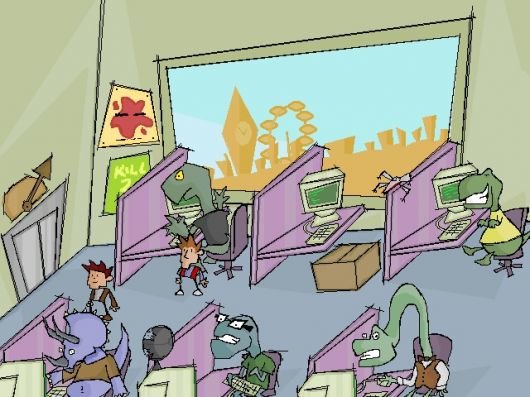 The game's puzzles, naturally enough, are inventory-based, all of the “use item on” variety. They are often extremely funny, if sometimes a bit crude. In one, Ben and Dan have to pacify a priest's son who has been turned into a cannibalistic zombie. In another, they have to incapacitate a character guarding an item they need, and end up taking a very direct, physical approach to the task.

Once they open new doors, players can enter and leave dimensions at will, though the puzzles in each one are mostly self-contained. A few times, players have to return somewhere they've already been to progress in the game, but the story is linear in nature, so you'll always have a good idea of what you're supposed to be doing. Everything is logical and doesn't produce much frustration, but you'll still have plenty of chances to flex your gaming muscles, as there are a lot of items to interact with and they’re often used in creative ways.

The interface is a Sierra-style affair, with action icons that can be cycled through with the right mouse button. However, there is notably an extra icon added to the lineup: normally, Ben and Dan walk in tandem with each other, but a “Dan” icon allows Dan to perform an action separately from his buddy. Use of this icon is essential, because there are a couple of puzzles that require each character to do something at the same time. 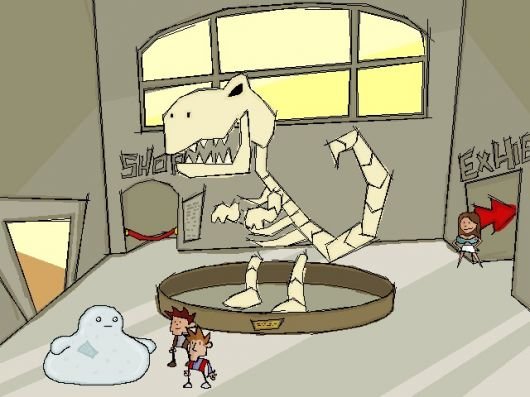 BTDT's cartoony, comic strip-style graphics are well-suited to the game. They are hand-drawn, with slightly rough edges and little sense of depth. Meanwhile, the colors are extremely vivid and seem to pop off the screen, which further helps to solidify the game's comedic emphasis.

The music, while well done, isn't particularly vital to the game's presentation, mostly taking the form of incidental ditties that play when you've accomplished a task. The sound effects, however—from the sound of a football game playing on a television to the odd blurps of the spaceship's systems—are among the best I've heard in an indie title, and really help to create atmosphere. As in most other games of its type, there is no voice acting.

It should come as little surprise that the game's hallmark feature is its humor. The dialogue brims with irreverent exchanges between Ben and Dan as they poke fun at each other's suggestions or offer commentary on an action the player just took. References to modern culture—particularly other games—abound. Some of the expressions Ben and Dan use, such as “knackered” (“destroyed” or “ruined”), took me—as an American—a little time to get used to, but they in no way hampered my ability to enjoy the game. 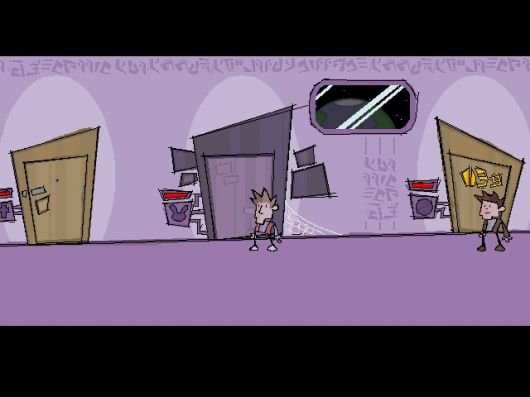 I only had a few problems with BTDT. First, the lack of depth in one of the screens caused me not to see that a character had dropped a certain item I needed. The item blended into the background, leaving me with no clear idea of what I had to do. Secondly, the game's dialogue uses the same palette as the graphics, and it's overlaid on top of them instead of in separate text boxes. This can make things a bit hard on the eyes, and it forced me to replay a few parts of the game. You can change the speed at which the dialogue displays, but I sometimes found the colors distracting.

Overall, Ben There, Dan That! is a hilarious game that all adventure fans should try. Its dialogue provokes countless chuckles and though the story is a bit bizarre, it's cohesive and well-paced, and it shouldn’t take more than a few hours to complete. It has a few rough edges, but they're mostly a consequence of BTDT being an Underground offering, and they in no way make the game less enjoyable. Perhaps best of all, the developers have confirmed that a sequel is forthcoming, and while the pair do make it back to their beloved abode, their romp through space-time ends with a riveting cliffhanger that is certain to leave players hankering for more.

The game can be downloaded from the Zombie Cow Studios site.

What our readers think of Ben There, Dan That!

BTDT is a very funny classic point and click game. Graphics are deliberately crude and voice non-existent. Puzzles are pretty straightforward and the game isn't very long, but the writing is hilarious throughout and the... Read the review »