We get a small commission from any books sold.
All Bitmap Books
Written by
Austin Boosinger — December 15, 2008

It’s been an amusing if sometimes bumpy ride through the first four episodes of Strong Bad’s Cool Game for Attractive People, creating a rather nervous anticipation of the series finale. So I was relieved to find that things look great from the start of 8-Bit is Enough. It begins with a chiptune-y rendition of the soundtrack and some Mario-esque smiley bushes, followed by Strong Bad’s ridiculous and accidental crash landing on the broken Trogdor arcade machine in his basement, making its already unworking condition infinitely worse. The whole setup is quite perfect really, providing the feeling that the game is striving to be artistic—or at least to be a clever ode to retro gaming. Luckily it succeeds in both respects, though like the series as a whole, this episode once again falls a little short of being as captivating or fun as it might have been.

The story is fittingly absurd. When Strong Bad mangles his beloved Trogdor machine, something goes drastically askew. The fire-breathing, one-human-armed dragon breaks loose from the game and begins “burninating” the real world. To stop this craziness, Strong Bad needs a “logic board” to stick in the arcade cabinet, and a means to destroy Trogdor for good. But due to some thoughtless advice from Videlectrix tech support, the “8-bit containment field” breaks, meaning the two worlds become indelibly mixed. From that point on, pixelized sprites can be seen in Free Town, USA, and Strong Bad can enter the game worlds of Videlectrix.

So you’re off, finding a way to Trogdor by weaving through both worlds and picking up party members, many of them characters from Videlectrix minigames encountered in earlier episodes. For example, “Snake Boxer V” provides you with some slithering snakes that fit uncomfortably in Strong Bad’s pants, while “Math Kickers” gives you access to the duelling Algebros. Other party members are variations of series regulars, such as King of Town minion The Poopsmith in his alternate handyman persona of “Mista Fixit”. The added members work as inventory items, each with a particular, usually obvious skill that will be needed in the puzzles to come. 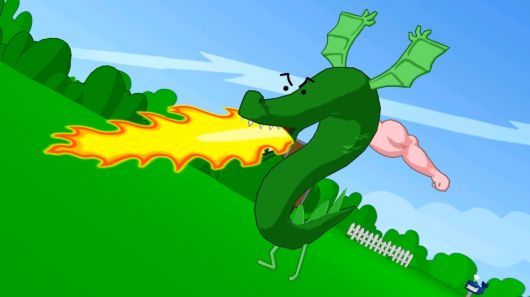 The Videlectrix game worlds you explore, available through a central mainframe hub, don’t quite offer a true 8-bit wonderland, but the few odes to the era are witty and clever. Going inside Peasant’s Quest is a great example of this. It’s a satisfying parody of the arbitrary, grammatically incorrect (think: “look tree” or “talk man”) nature of classic text parser adventure gaming. In one scene there is an irretrievable flask stuck to a wall, and Strong Bad has a great discussion with the innkeeper about needing useless items in such games.

The 8-bit era isn’t the only one represented, either. Late in the game, after working your way through a first-person Wolfenstein 3D parody (in a keyboard sequence so simple that even the most action-phobic gamers will breeze through), you’ll reach the inevitable Trogdor showdown, depicted in glorious low-polygon, first-gen PlayStation rendering. During that encounter, Strong Bad himself appears as a buff, heroic new form of himself that he once imagined on paper. The whole scene is quite a sight, and a fan delight for the Trogdor-obsessed.

It’s these little tidbits that make this game work, and the retro-love in this game deserves some serious credit. The only problem is that the 8-bit bits feel a little sparse, even within the game worlds themselves. With one notable exception, 8-bit tunes are surprisingly absent, which is a shame since they’re so powerful in evoking nostalgic emotion. Even visually the 8-bit influence is often understated. The game “Halfathlon”, for instance, takes place at the all-too-familiar Free Town, USA racetrack. There are (extremely) low-res sprites to be found there, but it comes off as slightly disappointing that there’s so little that’s truly representative of the era. 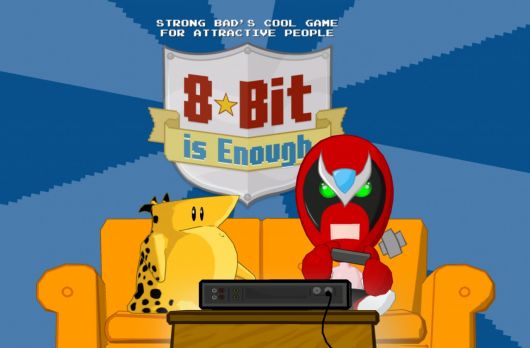 In fact, the only full 8-bit experience of the episode is the obligatory Videlectrix minigame “Gel-Arshie’s Pro Fruitboarder”. In the new minigame, you jump, collect fruit, avoid pineapple rings, press a key several times to perform tricks—à la Tony Hawk skateboarding games—and hope for the best. It’s tolerable, and necessary to play at one point (no “skills” required), but I’ll be very surprised if I hear of people playing it for fun or for a high score. Videlectrix games hint at good design at times, but they often only hint, and this game just falls too far off the potential mark. Exploring the “Pro Fruitboarder” in-game world works better, as you get to go behind the scenes to witness Gel-Arshie first-hand, and the results are mildly horrifying and brilliant all at once—the Kool-Aid inspired mascot assaults you with his smiley-creepiness, and at the same time you’re getting a faux behind-the-scenes look at the insides of an 8-bit game.

Like “Pro Fruitboarder”, many of the minigames you’ll get the chance to explore aren’t adventures by nature, but the gameplay remains standard adventuring fare. Unfortunately, this raises the ongoing series problem of puzzles that feel overly simple and lacking depth. At one point, you’ll need to find a missing coin on the same screen it’s requested, which is your cue to pull out your handy find-a-missing-coin device. I can’t even consider that a spoiler, as the solution is so next-to-obvious that your hand feels tightly held, and with other similar sequences, the game sometimes feels too passive as a result. It goes without saying by now that an episodic game isn’t expected to have deeply-layered puzzles that keep gamers up at night, but some sort of ingenuity or need-for-thought will always be appreciated in adventure games. Luckily, some of the other puzzles are nicely outside-the-box in design, and you’ll have too many items this time to rely on trial-and-error. However, I recommend keeping the hint system low or off, as the hints tend to pop up too soon, which is annoying the few times a puzzle actually begins to offer some challenge.

The cartoon-cute yet morbid minigame “Teen Girl Squad” is thoroughly absent this time, but most of the series mainstays return. The constant collecting is here, though it’s toned down a bit this time around. This game also feels less linear than previous episodes, and the available areas are both more numerous and more interesting, so collecting feels like part of the process, not something you have to stop or remember to do. In a welcome twist, collecting even gives some practical use for the camera you lug around in each game. 8-Bit is Enough also provides an entertaining sequence of de-haunting Strong Bad’s home in the dark, warding off ghost sprites with a mouse-controlled light. 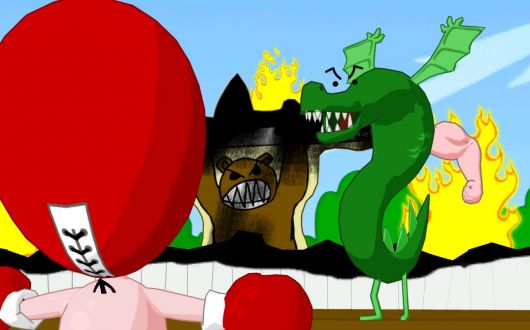 Again you have a huge cast, including not only the regular fan favorites but more obscure characters like first-timers Trogdor and the Strong Bad-like Japanese action hero Stinkoman. As an added bonus, the game also includes some unique (to SBCG4AP) characters, like an automated code wheel Copy Protector and the memorable Rather Dashing from Peasantry, making for a more diverse collection than any previous episode. Homestar Runner makes a more pronounced appearance, sticking with you thick-and-thin and popping up occasionally as your HUD (heads-up-display), whether Strong Bad likes it or not (hint: he does not). His appearances on screen help liven up the game’s vast empty spaces, but witty banter is minimal, and Homestar acts mostly as an orator for the in-game hint system.

The weak Homestar-Strong Bad pairing underlines the series reality that its humor and overall inventiveness are the main reasons to play rather than great storylines, characterizations, or even consistently compelling gameplay. It’s enough for some—and enough for me, usually—but I ultimately found the characters hard to get attached to or care about even at the end of five full episodes. Strong Bad’s ever-present annoyance and snide remarks often produce hilarious and awesome results, but connections are rarely made and others get no real chance to shine. Even more than the lack of over-arching plot to tie the games together, this is what can give these games such a hollow feeling: nobody seems to like anybody, and I still don’t feel like I know any of them any better now than when the series began. This is true of the cartoons on the Homestar Runner website as well, but four hour games offer so much more opportunity than four minute animations. 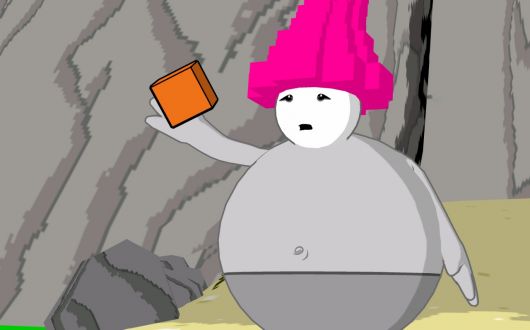 With the season now complete, I can confidently say that hardcore Strong Bad fans will love these games despite their unrealized gaming potential. From start to finish, they deliver more of the same quality quirkiness of the website’s cartoons, with consistently stellar production values and polish from Telltale. For occasional site visitors or total newcomers, however, it’s important to note that these episodes at times feel like an intentionally simplistic cartoon that has gone on too long, without the necessary level of interactive substance to make them an unqualified success.

As the series finale of Strong Bad’s Cool Game for Attractive People, 8-Bit is Enough doesn’t offer much more than previous episodes in terms of length and extras, but what’s provided certainly ranks at or near the top of what the series has offered all season, and the variety of locations, art styles, and characters surpass any episode yet. It’s still a little shallow in the gameplay department, but right down to the closing credits, it’s a lovingly thorough ode to retro games, and an amusing final adventure with some of the most colorful, acerbic, and silly characters you’ll ever virtually meet. If you can appreciate those things, then consider this game more than worthy of its pixels.

8-Bit is Enough is at least as good as any previous episode, though it’s not quite the series finale you’ve been waiting for, unless you’re in it for Trogdor and a bevy of NES-era humor.

What our readers think of Strong Bad’s Cool Game for Attractive People: Episode 5 - 8-Bit is Enough