We get a small commission from any books sold.
All Bitmap Books
Written by
Austin Boosinger — October 27, 2008

It seems only fitting the two should be introduced, as the similarities between them are starting to increase with each passing episode of Strong Bad’s Cool Game for Attractive People. Both have proudly (if somewhat ill-advisedly) worn the mask of the luchador, and now both have now pursued greatness in that highest musical calling: the Battle of the Bands.

Granted, the band thing is hardly limited to Jack Black and Strong Bad, as it’s anything but an original idea. It goes like this: someone sees a Battle of the Bands opportunity when down on their luck, and starts a band in pursuit of money or fame. Having seen the idea hashed out a few times already in other media, to me the concept is a little boring; hard to get excited about. So when word came that Baddest of the Bands would feature such a painfully hackneyed premise in Episode 3 of SBCG4AP, one had to wonder: is the game cleverly poking fun at a tired idea? Or (gasp!) is the series already losing its steam? 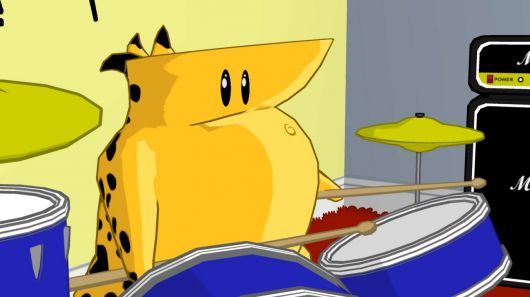 Surprisingly, the answer is neither, really. Like the last episode, the shtick is merely fodder for conceptual humor (last time it was world domination) but the game doesn’t focus on it—the humor, puzzles, and jokes span the gamut of clichés. In other words, the new episode doesn’t feel fixed on the tired band-rising-to-stardom plotline. And no one’s losing steam just yet, though we’re still waiting for the developers to raise the temperature on this series.

At any rate, this latest incarnation of the “band thing” starts one day when Strong Bad is playing “Limozeen: Hot Babelien Odyssey” on his fun machine. The game breaks, leaving him with a Pac Man-esque “kill screen”. And so he heads to Bubs’ for a fix, discovering to his dismay that it will actually cost him some cold hard cash. With an imaginary pixelated head from his Limozeen game to inspire him, Strong Bad sets out to sign bands for a concert, only to realize his best bet is to start a group of his own. Having already signed up competitors from other Free Town regulars, however, now the battle of the bands is really on, and will need to be settled Strong Bad-style.

Annoyingly, the ultimate showdown occurs only after a lengthy slow start. It took a good hour or so for anything to pique my interest, and there wasn’t much to do except wander around and talk to everyone as the plot slowly lumbered along. To make the wait worse, “Teen Girl Squad” is absent this time around, at least as an interactive or collectible exercise, instead treating us only to a quick viewable version of their latest hijinks. And without another similar-or-better mini-game in its place, its absense sticks out like a pair of boxing gloves on a wrestler. 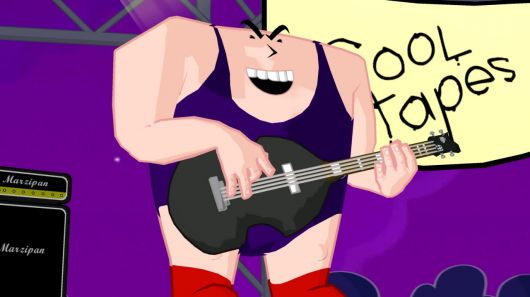 Being sans fun machine also means waiting until the end to play the Limozeen game for yourself. This is a fine way to encourage gamers to enjoy the “extended play” feature after the episode is completed, but comes at the expense of another activity during the course of the main episode, which had become something of an unspoken precedent set by the series so far.

Luckily, though, Telltale added something new into the mix, or in this case, someone. Namely: another LucasArts vet, Mike Stemmle, who co-wrote and directed this episode. As designer on previous titles like Sam & Max Hit the Road and Escape from Monkey Island, the question going into the episode was whether it would offer even more of that classic “LucasArts feel”.

And by God, it does. The puzzles are incredibly well suited in this game, and are the best in the series so far. As usual, most are inventory-based, with a few dialogue puzzles thrown in the mix, but whether you’re recreating a child-drawn album cover or manipulating environmental hazards to upset Marzipan, the puzzles represent the cleverest offerings yet. And for the first time, you really get the feeling of being devious. Strong Bad is at his best when wreaking havoc, and that’s what this game is all about. If you do pick this game up and find the beginning a bit too sedate, make sure to hold out for the last hour of the game—the puzzles become particularly weird and hilarious. 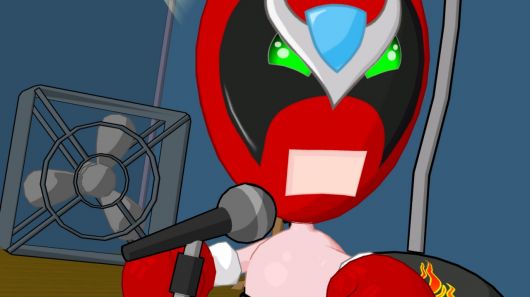 Unfortunately, puzzles don’t completely make a game, and Baddest of the Bands has other shortcomings that stand out in comparison, some of which are becoming endemic to the series. There’s still the problem of a barren world, as areas continue to feel lifeless and rarely animated. Sure, there are a few new areas, including the now-available Strong Mad’s room. But it’s a simple room, like many others, comprised of a handful of colors (this room is dominated by a bright orange wall) and a few objects.

After three episodes of the five-part season, one thing that’s becoming apparent is that there isn’t any continuation from one episode to the next, apart from maybe the odd throwaway gag that refers to preceding events. In fact, the only apparent “incentive” to see the series through to the end is the broken but soon-to-be-fixed Trogdor arcade game in Strong Bad’s basement, which is available for free on the Homestar Runner website anyway.

Still, fans of SBCG4AP, and Homestar fans in general, will appreciate this game like the others. It’s clever and witty, and the Chapman brothers are still masters of noticing the subtleties of idiotic humanity. You’ll notice it when visiting Bubs, whose signboard reads, “Conces5ion Stand.” You’ll notice it as you visit Marzipan’s band, Cool Tapes, which is gearing up to perform a benefit concert for an “endangered Lithuanian vegan albino bat.” But perhaps most enjoyable is all the purposely bad music in this game, like Pom-Pom and Homestar’s “Food-Related Love.” Baddest of the Bands is right. 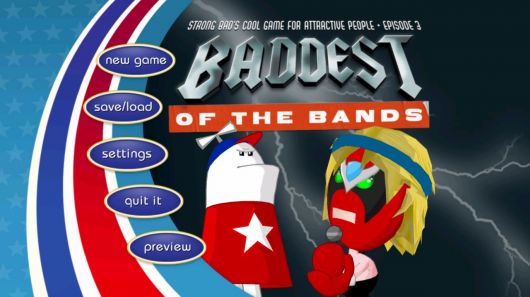 Aside from its trademark humor, you can expect some other familiar elements, such as appearances from most of the cast, the metal detector for collectibles, and of course, multiple Strong Bad Emails. Once things get going, you’ll breeze through this game in 3 or 4 hours, maybe adding another 30 minutes or so to collect all the goodies and find all the Easter eggs. Like the two episodes before, though, the collectibles sadly don’t unlock anything, being there just to… collect. It’s funny hearing Strong Bad’s rejection or approval of these items, but it’s likely that only die-hard fans will be devoted enough to find everything.

As much as it may be lovable for its unusual charms, it’s becoming increasingly hard not to feel that this series could use something new, something more engaging. At the very least, some kind of series arc driving the plot would be a welcome addition. As it stands now, it’s like a slow, repetitive rock ballad; the chord progressions are the same and improvisation feels minimal. Not unlike the Cool Tapes’ music, come to think of it.

The fact that this game excels at the end makes up for the slow beginning and mini-game robbery, but only to make it just as good as the last two episodes. If more of the same sounds good to you, you’ll find much to like about Baddest of the Bands. The series has yet to deliver a truly robust experience, however—one with enough challenge and complexity to match its genuine laughs and off-the-wall puzzles. But while opportunities are running out, there’s still time to adapt and evolve. It took a few episodes for Telltale’s previous series to reflect player feedback, so who knows: we may yet see something as brilliant and varied as the hit double-album that is the first two seasons of Sam & Max.

Episode 3 is still lighthearted fun but doesn’t tip the scale of the series, delivering more of the same as the previous games, if in slightly different proportions.

What our readers think of Strong Bad’s Cool Game for Attractive People: Episode 3 - Baddest of the Bands