Stories about magic are perhaps some of the oldest kinds of stories in existence, dating themselves to the beginning of written history and likely further back into prehistory as well. It isn't a surprise, therefore, that the fantasy genre, in all its myriad forms, has since come to be ubiquitous in all storytelling media – adventure games, of course, being no exception to the rule. Germany-based Silver Style Entertainment, having recently developed the newest installment in the Simon the Sorcerer series, has now brought another fantasy game to the table, this time an original title named Everlight: Of Magic and Power. The result is a light-hearted tale that's fairly fun to play, though it suffers from a handful of problems that keep it from being truly great.

The premise of Everlight is thus: you play a sixteen-year-old nebbish named Melvin who one day happens upon a candle shop – only it isn't just your ordinary candle shop. For one thing, the bucktoothed proprieter (creatively named “Mr. Teeth”) happens to be a practitioner of magic, which Melvin takes a fancy to after a couple of demonstrations. Mr. Teeth, seeing a glimmer of magical talent in the boy, instantaneously whisks him on a short trip to the medieval fantasy town of Tallen. Melvin then meets a fairy named Fiona who acts as his spirit guide, sending him on a quest to rid the townsfolk of a curse, while at the same time helping him overcome his personal fears so that he too can be a real magician, in true coming-of-age story fashion.

The curse that has befallen the townspeople – which also happens to form the basis for much of the puzzle design – turns them from their usual selves by day into completely different people by night. Scrupulous, penny-pinching folks become gamblers, harmless grandmotherly types become BDSM enthusiasts, the guy who runs the post office becomes a serial killer, and the richest man in town becomes a beggar on the streets. Neither of these polar opposites has any memory of the actions of their alternate personae, a fact that Melvin must use to his advantage, since it is only he who remains the same person from day to night. 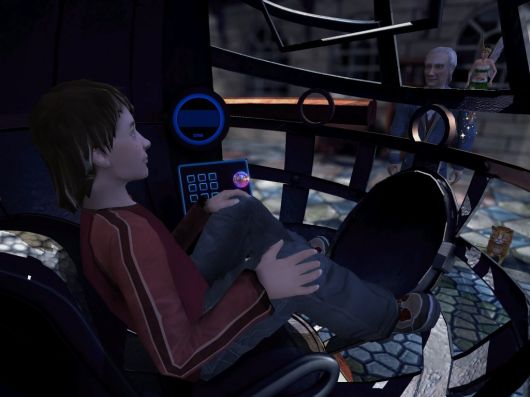 The treatment of daytime and nighttime in Tallen is akin to travelling between two alternate realities, which Melvin can freely switch to at any time with the click of a button. In this sense, we get quite a few puzzles reminiscent of the three different time periods in Day of the Tentacle, in that many inventory items can only be acquired at a certain time of the day, and things you do at night have measurable effects on what happens during the day and vice versa. To illustrate a clever example, during the day you find a useful old newspaper in the local inn, but the innkeeper won't let you have it because it's being used to wrap a fish. You then need to switch to nighttime in search of a way to dispose of the fish so that the innkeeper will no longer have any need for the newspaper, allowing you to take it for yourself the next morning.

Sadly, despite the interesting framework, not all of the puzzles make sense, nor do they all exist to enhance the story. There's one segment near the end of the game where, just as things are starting to get exciting, Melvin winds up being sent around to do some odd jobs before he can proceed further on his main quest. I personally felt that this hurt the game's pacing, and that it was put in simply to artificially lengthen the game. There are also quite a few “backwards puzzles”, in that I often found solutions to problems before finding the problems themselves. This would sometimes result in the game assuming I possessed knowledge that I hadn't yet come across, leaving me feeling confused rather than satisfyingly challenged.

It also doesn't help that the writing is subpar. Though the basic story is intriguing, albeit familiarly grounded in fantasy tropes, the characterization comes out as flat and often too stereotypical. You have the plucky would-be hero, the sardonic sidekick, the wise old wizards, the scheming evil masterminds, and the obligatory damsel in distress that the hero “gets” in the end. The latter character, by far, annoyed me the most; when she went so far as to blame her own kidnapping on herself for going out alone at night, I wanted nothing more than to reach into the screen and shake some sense into her. What's even more disappointing about the writing is that there are altogether too many instances in which the writers tried for comedy and failed. There's plenty of fourth-walling, anachronisms, smutty jokes, and uses of the word “dude”, but I don't remember even laughing once. The general long-windedness of the dialogue may have been a factor here, coupled by the voice actors' tendency to sound like they were reading from a script rather than acting. I had to turn subtitles on after a few minutes because I frankly got tired of listening. Another factor could be translation issues, but given that I don't understand German, I have no convenient way of telling whether the original script was any funnier. 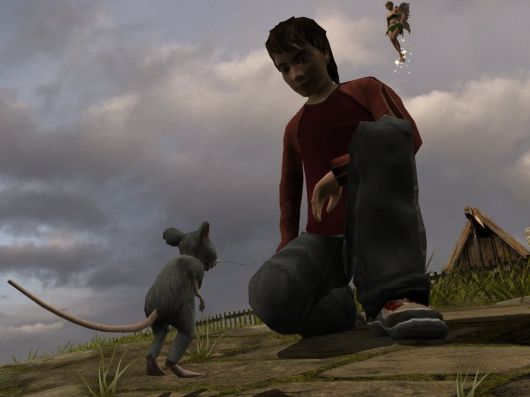 That said, even despite these issues, I still managed to enjoy playing the game, and this was mainly due to its atmosphere. The art direction, while not overtly cartoony, does possess a certain whimsy to it, with crooked windows on buildings that remind me very much of Frank Gehry's architecture. The characters are similarly designed – Melvin even looks vaguely like a cartoon version of Daniel Radcliffe from the Harry Potter movies – and while their animations are slightly less than lifelike and sometimes repetitive when it comes to hand gestures, they worked for me, because they made me think of quaint wooden marionettes performing in a puppet theatre, which I thought matched the setting. Finally, the background music, though not quite memorable enough to make it into my all-time favourite game soundtracks, is nevertheless appropriately medieval fantasy-sounding and feels like a nice garnish to the atmosphere that was already there.

The game's interface uses a simple single-click cursor, with small context-sensitive icons appearing next to it when hovering over something, which exist to give helpful hints as to which objects are interactable and which ones are just scenery. Pointing towards the bottom of the screen brings up a menu bar containing inventory items, plus icons to access the game's map and to switch between day and night. This positioning was unfortunately a little clumsy for me, as I would sometimes try to click on an exit at the bottom of the screen and accidentally toggle the menu. It would have been better on top, as there are fewer places for Melvin to walk around that area. Other than that particular quirk, I found the interface to be reasonably user-friendly and unobtrusive, helping my sense of immersion into the game rather than hindering it. 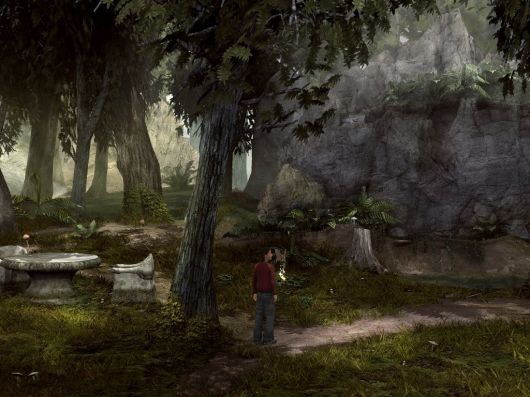 Finally, I should give an honourable mention to the in-game hint system: a feature I always enjoy seeing in adventure games, as it saves me the trouble of closing the game and reading a walkthrough in the highly likely event that I get stuck. The hints are offered through a menu in a three-tier style, starting from a gradual nudge in the right direction and finishing with an outright solution. They even come with a difficulty level that allows you to limit the number of hints available to you if you choose. The hints are narrated from Fiona's point of view, which I thought was very cute. Sadly, the system isn't anywhere close to perfect, as the hints aren't as context-sensitive as they ought to be. Sometimes they told me that I needed to use an object I hadn't even picked up yet – and more often than not, there wasn't even a hint that told me where that object was located. What annoyed me even more was the way that Fiona's voice would occasionally “taunt” me when I tried to get hints, saying things like “you could use your brain, you know!” Given that certain solutions required more guesswork than brain-work, I found these quips completely unnecessary, and as was the case with the rest of the game's attempts at humour, not in the least bit funny.

All in all, Everlight is a generally pleasing experience, though it could have been much better with a bit more spit and polish. As it stands, I managed to enjoy it for what it is over the course of eight to ten hours and would wholeheartedly recommend it as a game to play if you're seeking a charming fantasy-themed diversion. It's got a reasonably interesting plot, accompanied by an appropriately whimsical visual style, which should fit the bill nicely. Just don't in any way expect it to bring anything new or thought-provoking to the table, or to be nearly as great as the classics of the genre.

Everlight is no classic, but it still manages to be charming and fun despite its faults, particularly if you like light-hearted fantasy games.

GAME INFO Everlight: Of Magic & Power is an adventure game by Silver Style Entertainment released in 2008 for PC. It has a Illustrated realism style and is played in a Third-Person perspective.

What our readers think of Everlight: Of Magic & Power