Review for Murder in the Abbey

Dráscula: The Vampire Strikes Back

The Mystery of the Wicked Village

We get a small commission from any books sold.
Written by
Kim Wild — October 16, 2008

When it comes to murder mysteries situated in religious environments, novelists have managed to create many complex tales over the years, with G.K. Chesterton responsible for the Father Brown mystery series, Charles Merrill Smith creating Rev. Randollph, and the likes of Agatha Christie periodically returning to the setting of country parishes as the scene of a crime, with the local vicar often under the collar of suspicion. Yet monasteries and murders is a subject matter that has rarely been tackled within the confines of an adventure game, so it is refreshing to come across Murder in the Abbey, a whodunit set in a medieval Spanish monastery. But while the intriguing storyline and interesting cast of characters capably carry on the fine tradition of religious murder mysteries, a few key issues prevent the game from reaching its full potential.

Bearing many similarities to another book, The Name of the Rose by Umberto Eco, this third-person adventure focuses on the investigation of Brother Leonardo of Toledo, who must unravel the mystery of some strange happenings in the remote monastery's library. But first he needs to safely get there. Leonardo and his young protégé Bruno have embarked an a long journey to the Nuestra Señora de la Natividad Abbey to study with the order of Monks, and before they even arrive, a mysterious figure emerges from the shadows and pushes a boulder into their path, narrowly missing the pair. It is clear something sinister is afoot, made all the more apparent by the Abbot's subsequent request to investigate the death of gatekeeper Brother Anselmo, followed by strict instructions not to ever enter the library. With mysterious lights appearing in the library at night, fellow monks being uncooperative during inquiries and more murders taking place as the adventure progresses, are these tragedies the result of foul play or something demonic at work? That is one of many questions that players will need to answer.

Despite its dramatic introduction and ominous premise, the pace of the storyline is quite slow, almost akin to that of a plodding drama. Fortunately, there is enough intrigue in the goings-on of the monastery to maintain interest to the end, and in some ways the slower pace actually works in the game's favour, allowing players to thoroughly investigate without ever feeling rushed. Other than its religious setting, Murder in the Abbey plays out as a conventional detective adventure in most ways, and while the feeling of suspense is limited, the plot twists can be unpredictable and prevent the journey from becoming tedious. 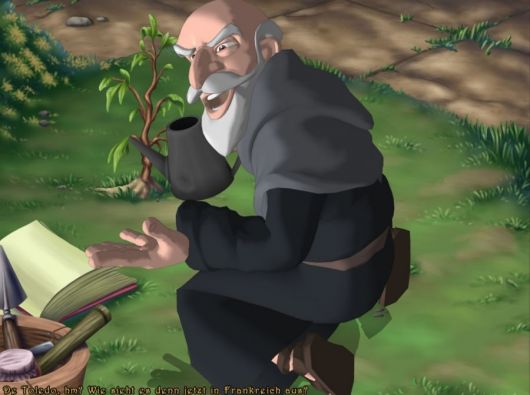 Due to the investigative nature of the game, the bulk of your efforts involves talking to the residents of the monastery, gathering clues and then using these to progress. The monastery itself is not that big, with only a small range of locations available such as a hospital, stables, wine cellar, cemetery, and of course the infamous library, but the game does a good job of opening up and closing areas gradually throughout so that it never feels too repetitive. A map is readily available, so it is possible to move directly between locations, which is something of a godsend given how slowly Leonardo walks around.

Taking place entirely within the confines of the monastery, there isn’t much variety in the scenery, but it’s all presented in an art style that’s certainly nice to look at. The visuals really stand out from most games, with a hand-painted cartoon look with lots of detail in backgrounds. Some of the facial movements are impressive and the use of lighting and shadows is good, giving the place a real sense of depth. Night scenes are particularly noteworthy, as they’re both well drawn and inject a tangible sense of menace in the air. Still, as nice as the graphics are, there are times when the cartoony style seems to conflict with the subject matter being explored, downplaying the seriousness of murder and religious rituals, making it something of an odd stylistic choice.

The cinematic introduction itself is particularly stunning, which really made me eager to play the game right from the outset. However, the animated cutscenes are not always so well executed, looking ropey and less professional due to the drop in quality. Close-ups of characters are also hit and miss; at times they look the part but at others seem garish and out of place, feeling like they are stuck onto the backgrounds rather than being part of the environment. 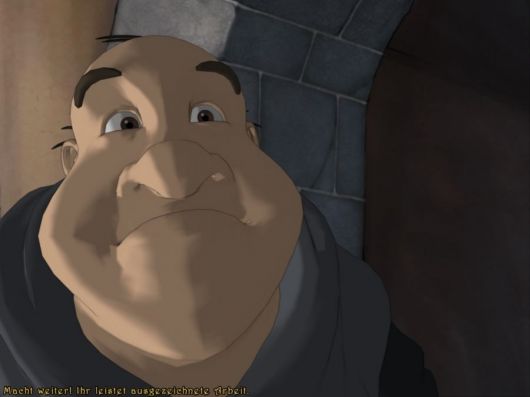 There is very little music to speak of, but when the orchestral score does play, it suits the environment well. As you might expect while wandering around the monastery, the soundtrack at times is choral, with distinctly religious undertones. From subtle chanting in certain scenes of the storyline, the music swells during dramatic events, becoming faster paced and evoking a sense of danger. Voice acting is also generally well done, effectively bringing the characters to life and adding an almost quaint feel to the game. There is one glaring exception to this high standard, but more on that shortly.

As you play through the game, it becomes apparent that Leonardo is reminiscent in character to that of Sherlock Holmes: uncannily logical and possessing the ability to analyze situations from the smallest of clues that many others would overlook. Just like Holmes, Leonardo regularly summarizes his theories throughout the investigation, and while this is a strength in many ways, giving the character personality and providing ample opportunities for interaction with other characters, it can at times leave you feeling frustrated. Leonardo is always one step ahead right until the final revelations, and there aren't enough clues left behind for the player to ever work out the mystery before he does, or even alongside him. In this respect, there are times when it feels like you are a spectator watching events unfold without fully being involved. Leonardo also keeps a journal as you progress which can be referred to at any time and is well written, in keeping with the style of his character and having the feel of a medieval document.

Unfortunately, Bruno is cast as the dim-witted idiot of the game, and is quite possibly the most irritating character to ever be featured in an adventure game. An early teen, he not only comes out with the most stupid of comments, he also has a high-pitched whiny voice that makes you cringe every time he speaks. While intentional on the part of the developers (Leonardo often despairs of his inexperienced apprentice, calling Bruno his 'toothache'), it won’t be long before you wish Bruno will become the next mysterious victim at some point. Thankfully, all of the monks encountered, from Brother Martin, the bubbly cook, to the senile gardener Brother Arcadio, are well developed as characters and have interesting dialogue. With the bulk of the game involving investigation, you can expect a lot of conversation, and this is thankfully one of Murder in the Abbey 's strongest attributes. The only downside is the lack of any real investigative strategy. All options have to be exhausted in order to progress, quickly removing the illusion of choice when you realize your response makes little difference to the outcome. 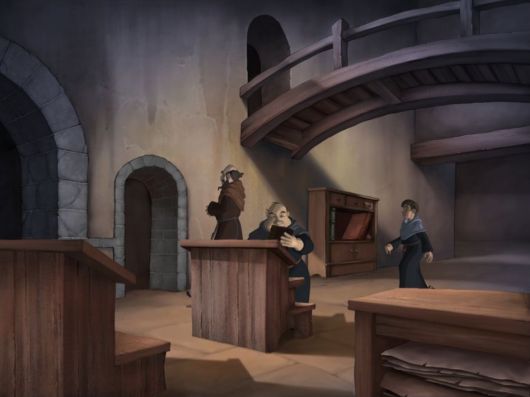 What puzzles there are -- and this is one of the weakest aspects of the game -- mostly involve fetch and carry quests, acquiring items for other characters in order to receive information to progress. The remaining gameplay involves the collection of objects (naturally themed to their medieval environment, such as candles, herbs, scrolls) that can then be combined with others, and several standalone slider puzzles, which you'll probably either love or hate but are executed reasonably well here. That said, while the puzzles are a bit lacking in variety and on the easy side, they make sense and you rarely feel that leaps of logic have to be reached in order to progress. Strangely, one obstacle involves assembling a pattern in order to unlock a gate, but rather than being asked to solve it yourself, it is done for you in a cutscene, which is something of a missed opportunity on the part of the developer. While the relative lack of challenge prevents Murder of the Abbey from fulfilling its promised 20 hours of gameplay, at around 10-12 hours it is about the right length for the story, never feeling like the game has been padded out unnecessarily.

One bone of contention is that the game is riddled with a few bugs that can completely cripple progress, though it seems to vary when they occur so they may not happen to everyone. One occurred when I opened a parchment of images to compare with a statue but was then unable to close it, leaving me stuck on that screen. It is also possible to have Bruno fall into the well at a certain point (hurray!) but be unable to rescue him. As much as I would have liked to leave him there for all eternity, he is unfortunately needed for some of the game's puzzles and you can't progress without him. If there is a workaround to overcome this dilemma, I sure didn’t find it. Such issues meant I had to restart from different save points to avoid them, and it's a shame that they went unnoticed during development. A lesser problem is when the subtitles do not match the voiced material, while on other occasions sentences are uttered from an entirely random conversation, completely ruining the experience.

Murder in the Abbey is ultimately one of those games that is fairly enjoyable to play through yet leaves you with the feeling that something is missing. The well written dialogue and storyline carry the game respectably, keeping you involved right until the end, but the annoying choice of sidekick, some unfortunate bugs and both the scarcity and unimaginative nature of the puzzles means that the game never feels truly engaging. And while I was generally intrigued by the investigation of Leonardo, it would have helped if I was more personally involved in unravelling the secrets that the abbey had to reveal. Given the striking visuals and rich material at hand, this could have been something special. As it is, Murder in the Abbey is merely a decent rather than an amazing journey into the medieval era.

Largely enjoyable as a medieval mystery, Murder in the Abbey’s fairly weak gameplay lets down the quality of the story.

GAME INFO Murder in the Abbey is an adventure game by Alcachofa Soft released in 2008 for PC. It has a Stylized art style and is played in a Third-Person perspective.