Chronicles of Mystery: The Scorpio Ritual  (2008) 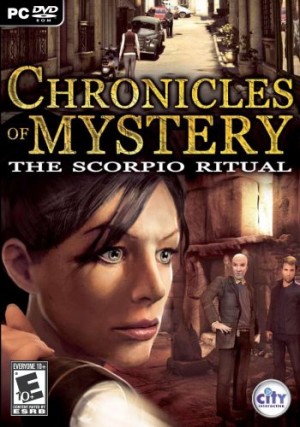 We get a small commission from any books sold.
All Bitmap Books
Written by
Josh Roberts — January 19, 2009

Sylvie Leroux has a problem. Her archeologist uncle, a man who not only raised her but also helped inspire her career as a budding young archeologist in Paris, has gone missing. And wouldn’t you know it, his disappearance comes just as he’s about to crack an incredible, history-altering mystery at a dig site on the tiny Mediterranean island of Gozo. What’s an intrepid young archeologist to do? Why, return to her childhood home on Malta and begin the search for her missing uncle, of course. And that’s just what Sylvie—and you—get to do in City Interactive’s latest, the Da Vinci Code-esque third-person adventure Chronicles of Mystery: The Scorpio Ritual.

Having spent some time on Malta myself, I was interested to see whether City Interactive’s take on the island would feel authentic. Simply put: it sure does. Everything from the color palette on the strikingly realistic pre-rendered locations—all soft yellows and browns by day, ominous shadows by night—to little touches like swaying laundry, twirling street signs, clanking shutters, and even stray cats wandering the alleys, is evocative of the island and its characteristic charm. Similar attention to detail is paid to the game’s other locations, which include Istanbul, Rome, and a couple of underground caverns/ruins, though it should be noted that each location feels “small”—your trip to Istanbul, for example, consists of a single environment based around nothing more exciting than an art gallery.

In contrast to the artistic detail given to the environments, the in-game animations show less polish. The biggest problem: there simply aren’t enough of them. Often when Sylvie acquires an item it will simply disappear from the screen without so much as arm movement on Sylvie’s part. And in confined areas where the characters are larger in relation to the pre-rendered backdrop, character movements appear stiff. On the whole, however, the general appearance of the characters you encounter is attractive and realistic—particularly Sylvie herself, who is (of course) thin and pretty, but at least proportioned like an actual young woman rather than, say, like another more famous tomb-raiding archeologist I could think of. At one point Sylvie even goes undercover and gets a whole new appearance as a nun. 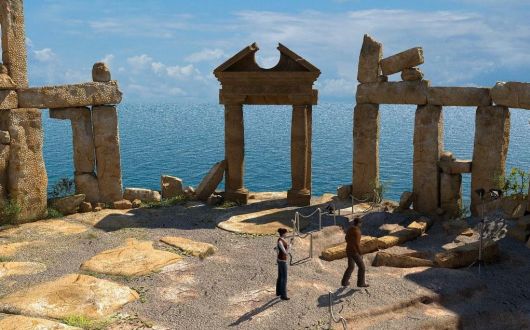 The mouse-driven controls are fairly straightforward and what you’d expect from a modern point-and-click game. Your cursor becomes either a talk, take, or look icon when you scroll over a hotspot, and the option to reveal all hotspots with a single keystroke removes the possibility of a dreaded pixel hunt. This proved necessary for me a few times due to the hyper-realistic environments in which smaller items sometimes tend to blend into the background. Double-clicking on a location causes Sylvie to run to it. This is generally a good thing, except in enclosed spaces such as Sylvie’s shoebox-sized Parisian flat, when running from a desk to a fireplace within feet of each other comes across as mildly comical. Likewise when disguised as a nun.

If there’s a flaw with the interface, it’s a general lack of interactivity with the items in your inventory. I’m of the combine-everything-with-everything school of puzzle solving, but the game simply refuses to acknowledge your efforts if you attempt to combine two items that do not belong together. A few simple “that doesn’t work” replies would have been welcome. Such acknowledgements do occur when you unsuccessfully attempt to use inventory items on hotspots within the game environment, however, generating funny (if repetitive) comments like, “Sylvie, think!” and “Trial-and-error method, I suppose.”

The Scorpio Ritual’s greatest strength is Sylvie herself. She’s a character you can actually like, voiced with competence and flair by a likeable voice actress who seems to inhabit the character rather than simply reciting her lines. Adding to Sylvie’s appeal is the lived-in feel of her world. The return to Malta in search of her uncle is a homecoming, and the other characters she meets there remember her as a child. Likewise, Sylvie reminisces about everything from her school to her uncle’s house. I found myself invested in the quest because I genuinely liked Sylvie herself. 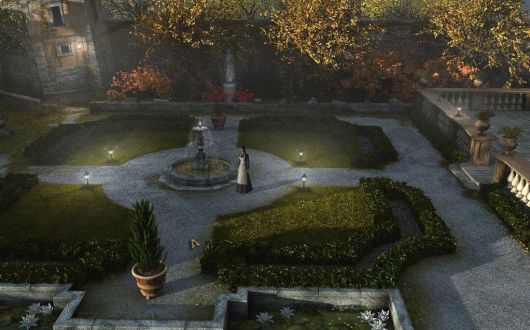 By my count, Sylvie encounters just short of 20 non-playable characters over the course of the game. Most are small parts--taxi drivers, security guards, et cetera--voiced by competent if unspectacular actors. The two most significant supporting characters are Henri Simon, a fellow archeologist who had been working with Sylvie's uncle until his disappearance; and James Anderson, a linguist who may be the key to deciphering the game's central mystery. These characters are capably performed by their respective actors, even when called upon now and then to recite a slightly awkward translation from the game's original language. For example, while the English translation is largely quite seamless, there is one cringe-worthy scene between Sylvie and James. “Let’s be friends,” says one to the other, as if they were in kindergarten. Surely that came across better in the original version.

I mentioned The Da Vinci Code earlier, and I don’t think there’s any way around the fact that The Scorpio Ritual is a clear derivative of the basic Dan Brown formula. Biblical mystery? Check. Ancient conspiracy? Check. Secret that could rock the Catholic Church? Check. And as with the material that inspired it, you're never quite sure who's the real villain--or, for that matter, who might secretly be working for the greater good--until the big reveal at the end. The game maintains that mystery well throughout, and notably does not fall back upon scapegoating the Catholic Church for everything, though the Vatican does have a role to play in the affair. (I won't spoil what that role is, however.) Your level of enthusiasm for these kinds of clichés will likely affect your enjoyment of the story. Personally, I never tire of conspiracy thrillers and ancient mysteries. Your mileage may vary.

I should also point out that The Scorpio Ritual is a short game—six to eight hours of play spread across four main locations—and it culminates with an unusually abrupt ending. While the final cutscene does tie up a number of loose ends, it comes so suddenly that I, at least, wasn’t expecting it. It feels rushed. 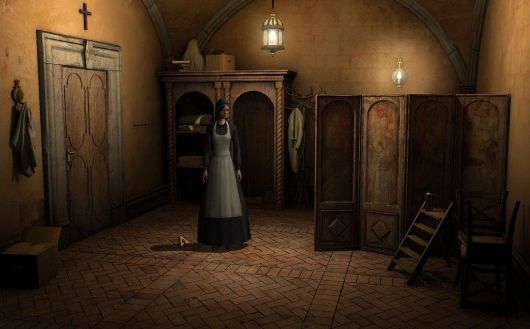 Also contributing to the game’s short length is the ease of its puzzles. They consist mainly of the inventory-based, use-this-with-that variety, with one “moving crate” challenge and a few pattern recognition puzzles thrown in for good measure. Nothing reaches the level of a real brain teaser. On the other hand, there aren’t any absurd “you want me to do what?!” collapses of logic, either.

What makes The Scorpio Ritual truly easy, though, is the developer’s design decision not to allow you to leave a location until you’ve accomplished everything the game needs you to accomplish. Thinking I’d completed everything I’d come for while at the ruins on Gozo, for example, I attempted to leave only to have Sylvie say, “My intuition tells me I’ll find some more interesting things back at the site.” This keeps each batch of puzzles self-contained to the specific area where you begin them, reducing your interactive options to a small enough number that it’s difficult to remain stumped for too long. This isn’t necessarily a bad thing, of course, but be forewarned if you’re expecting more of a challenge.

Me, I don’t mind the occasional nice, easy adventure. And ultimately I think that’s a fitting description of the game as a whole: nice and easy. Pleasant while it lasts, but very, very short. While The Scorpio Ritual doesn't overtly hint at a sequel, there are certainly plenty of story opportunities left to explore, and I for one hope we’ll get to see Sylvie again in a longer adventure.

While never fulling rising above its clichéd premise, The Scorpio Ritual is nevertheless an enjoyable (albeit short) adventure in the Da Vinci Code mold.

GAME INFO Chronicles of Mystery: The Scorpio Ritual is an adventure game by City Interactive released in 2008 for PC. It has a Illustrated realism style and is played in a Third-Person perspective. You can download Chronicles of Mystery: The Scorpio Ritual from: We get a small commission from any game you buy through these links.
The Good:
The Bad:
The Good:
The Bad:

What our readers think of Chronicles of Mystery: The Scorpio Ritual

decent production values and enjoyable enough, but not overly original or memorable

Polish developer, City Interactive, have done 2 games in their 'Art of Murder' series and now this is the first of 'Chronicles of Mystery'. They seem to churn out their titles pretty fast... which is... Read the review »