When it comes to considering Insecticide, there are several important factors to juggle. On one hand, the game is not a traditional adventure by any means, delivering a full-fledged “action-adventure” exactly as advertised. On the other hand, it’s not like other action-adventures, either, alternating as it does between completely distinct action levels and adventure scenarios rather than blending the elements together. The good news, on a third hand, is that the classic adventuring portions provide some solid entertainment, while the bad news on its opposite hand is that the platforming and light shooting sections are little more than weak, uninspired filler. Then again, on still another hand, the game would be obscenely short without them, since it’s only half a game (or “Part 1 of 2”) to begin with, though on the sixth and final hand (thank goodness we’re not spiders), the finale is soon to come, so PC players looking for the full Insecticide experience won’t have long to wait.

That Insecticide largely succeeds in its time spent adventuring should come as no surprise given the pedigree of its developers. Crackpot Entertainment is yet another spin-off studio from former adventure giant LucasArts, and the combined talent and experience from those genre glory years by the likes of Larry Ahern, Peter Chan, Peter McConnell, and Mike Levine (not to mention Sierra ex-pat Josh Mandel) clearly shows. Unlike fellow alumni Telltale Games and Autumn Moon, however, Crackpot opted to branch beyond its point-and-click roots, to decidedly mixed results. The ambition is commendable; the execution… not so much.

In case the title didn’t give it away, Insecticide is all about bugs. Dead bugs. Preferably not you, though you’re a bug, too. Humanoid-like insects have replaced people as the dominant race, and despite their superior survival instincts, they seem to spend a lot of time trying to kill each other. Players control police detective Chrys Liszt, a young female cop with an eye for detail, a hair trigger, and a mysterious past, though not necessarily in that order. Along with your grizzled partner Roachy Caruthers, you’ll lead an investigation into a murder at the Nectarola soft drink company. Over the course of eight chapters, the case will take you deep into Troi’s seedy underbelly (or perhaps in a downtown bug metropolis, that’s just the regular belly), from your cubicle at Precinct 47 to a two-bit diner to the local wharf, with plenty of ledges, highwires, and box piles in between. 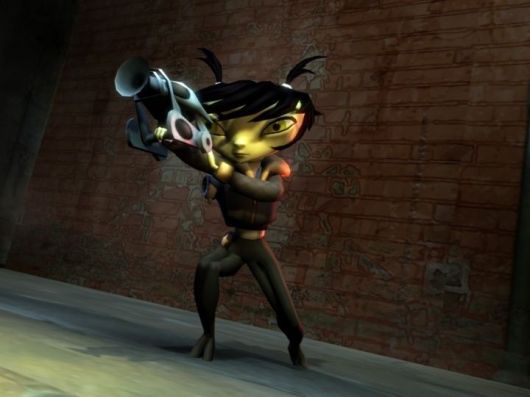 If you’re squeamish about bugs, rest easy, as there’s little gross-out factor in Insecticide. The graphics are highly stylized with a cute, almost cartoonish look that defies its otherwise-repulsive subject matter. Think A Bug’s Life, not The Fly. This is especially true of the fanciful characters that range from stick bugs to beetles (rhino, not dung, thankfully) to wasps. While many of the goons you face in the action levels have generic models, all the key adventure figures are uniquely designed and brought to life with fantastic voice acting and a strong script. Whether the elderly Nectarola matron Quinbee, Chrys’ weapon-obsessed colleague Bloombug, or the hard-boiled, cigar-chomping Chief Chigger, the supporting roles are mainly clichéd but memorable in a deliberately noir-themed way. Unfortunately, many feel underused in this initial instalment, though presumably we’ve not seen the last of them. The dialogue is rarely laugh-out-loud funny, but it’s filled with bug gags and has a silly charm that keeps the mood light throughout. Chrys herself is buggishly attractive, with large, bright green eyes and finely-coiffed antennae, and her vocal performance is perhaps the strongest of the lot, which is important as all of her investigative monologues are fully voiced as well.

If there’s a weakness in the game’s design, it comes on more of a technical front. The 3D graphics are clean enough but very basic and underwhelming. Perhaps this stems from the game being simultaneously developed for the Nintendo DS, or from an attempt to keep the download size low for the PC version, but failing to better maximize PC capabilities hurts the overall effect. Fortunately, the game offers widescreen support and runs smoothly at adjustable resolutions to accommodate a range of system specs. I’ve heard complaints about excessive darkness in the game, but I experienced no such issues, so apparently mileage varies on that front. A few other minor… umm… bugaboos make their presence felt, however, like the highly pixelated cinematics to corners cut on animations to atrocious lip syncing. The latter is most prevalent, as the characters continue to move their lips well after the dialogue ends, making Insecticide feel like a cheaply-dubbed martial arts movie, albeit one accompanied by a great jazz soundtrack.

Whether in adventure or action modes, the game handles with a standard mouse-keyboard combination. Maneuvering Chrys freely around the environments is easy enough, though there’s no native gamepad support, which is an unfortunate oversight. Movement is a bit faster in the action levels, but there is only one default speed at any given time, and it’s never quite fast enough. You’d think with an extra pair of legs that Chrys could step it up a bit, but she’s intent on taking her time. 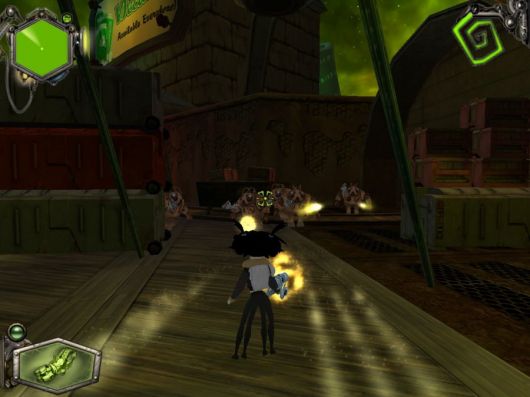 While many 3D adventures feature an auto-highlighting system for hotspots, Insecticide adds a new wrinkle in its investigation chapters. You can’t interact directly with the environment while moving around, but an on-screen icon (and in most cases, common sense) reveals when you can switch to an interactive close-up. Once there, the screen locks into place and the game switches to standard point-and-click, with look, use, and inventory options available. It takes some getting used to, and sometimes the close-ups will turn you in an unexpected direction, but it’s quite functional once you wrap your mind around it. Gameplay in these chapters is exactly what you’d expect from a traditional adventure, as you look for clues or items you need, talk to other characters, solve puzzles, and nose around other non-essential stuff just for kicks. Challenges are almost all inventory-based, and as each environment is self-contained, the solutions are pretty straightforward with a bit of exploration. The focus here is clearly on entertainment over difficulty, so be forewarned if brainteasers are your thing.

The action levels are certainly more difficult, though not generally for the right reasons. One of the frequent complaints about any action in adventures is that it’s rarely done well, and Insecticide isn’t likely to sway that argument. The premise is standard enough: move your way through a linear series of obstacles, collect power-ups, and shoot any bad guys that get in your way. The platforming elements are virtually non-existent, however. Occasionally you’ll need to jump across openings or up a pre-arranged stack of objects, but the only “move” available is a light mid-air double jump. That’s probably a good thing, since the controls feel so loose that any more demands for precision would be a further detriment. Sometimes I’d simply “miss” a landing by sliding off for no justifiable reason. One time I dropped straight through a ledge as if it weren’t there. Apparently I wasn’t supposed to go that way.

If the mechanics are a nuisance for platforming, mind you, they’re a downright annoyance in combat. There’s nothing complicated about the act of shooting, just the prospect of actually hitting anything that isn’t stationary. There’s no real enemy AI to speak of, as they’ll generally just hold their ground and occasionally run for cover and then back out for more shooting. The problem is, you’re wielding what have got to be the slowest-firing weapons in the history of shooters. You can collect a small variety of weapons throughout the game, but only the mold spore (read: grenade) launcher is very effective, since at least that causes splash damage. The rest fire some sort of acidic, goopy ammunition that travels so slowly the enemies can easily dodge it. It’s practically like “bullet time” in reverse, where only your shots move in slow motion. Of course, the same is true for them, so gunfights end up feeling more like a long-distance dance routine. That leaves rushing in to point blank range as your strategy of choice, where you both fire an indeterminate number of shots at each other until one of you goes down. Liberal power-ups will replenish your health bar and ammo, so you’ll always have the advantage, but at no point does the fighting ever feel fun. If you die, you instantly revive at the nearest checkpoint with full health, though everything else resets as well, so you’ll need to fight your way back to where you were all over again. The checkpoints are generously distributed, at least, so you shouldn’t face a lot of repetition. The same can’t be said for permanent saving, however. You can’t manually save your game at any point mid-chapter, and quitting will wipe out all progress. 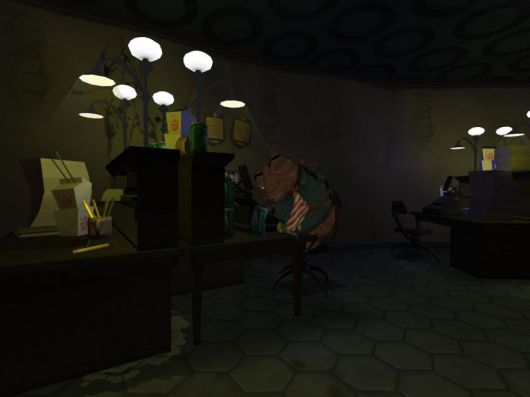 Of course, a better save system would have risked making a very short game shorter still. Even with a few reloads and extended rounds of the shootout two-step, Insecticide should only take about three hours to complete. At an opening cost of $15, that’s not a lot of splat for your buck, even by episodic standards. What’s worse is that the game doesn’t stand alone as a complete story. While not exactly ending on a cliffhanger, the main investigation isn’t resolved in any way, and the hints of Chrys’ troubled backstory are never fleshed out. Had this been the beginning of a truly serialized adventure, I’d be more accepting of this limitation, but since there are only two parts in total and the second is just around the corner, I can’t see much justification for splitting them up. After all, the DS version was released in its entirety, and while reportedly scaled-back in production to accommodate its handheld platform, the end result was still a complete game, while early PC adopters get less. Admittedly, if you play the first part and don’t like it, you aren’t on the hook for the second, but it’s hard not to feel like the game is unfinished business after a single instalment alone.

There are certainly some positive elements in Insecticide that make it worth a look, mainly in the classic “adventure” half of its action-adventure gameplay. The trouble is, that’s only half of what is only half a game to begin with. Even if you’re willing to put up with the lackluster action portions for the sake of the attractive art design, strong soundtrack, groan-inducing puns, and inherent charm of the characters and game world, it’s still hard to recommend Part 1 before the second and final episode is released. The first instalment is diverting enough while it lasts, but it won’t last long, so unless you’ve got ants in your pants, you should probably wait a mite bit longer for the completion of the story still to come.

Update: Since this review, publisher plans to release the second part of Insecticide for PC have been discontinued.

Insecticide is a refreshing mix of gameplay elements, but the action sequences really drag the experience down. And splitting a short full game into two halves just isn’t cricket.

GAME INFO Insecticide is an adventure game by Crackpot Entertainment released in 2008 for PC. It has a Stylized art style and is played in a Third-Person perspective. 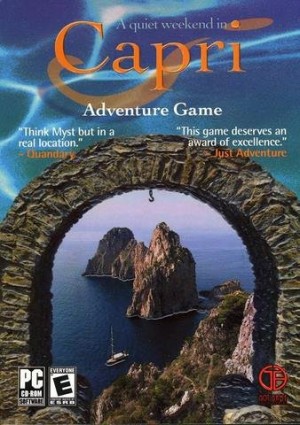 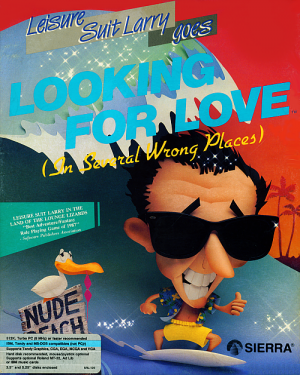 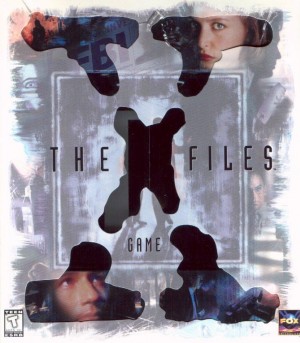 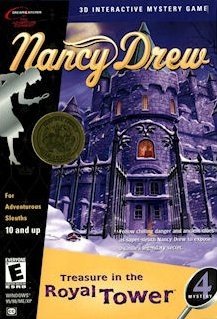 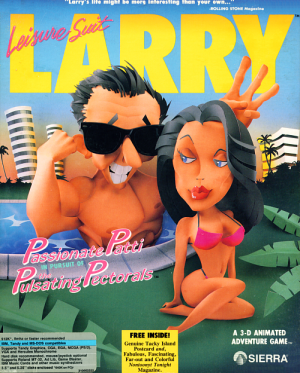 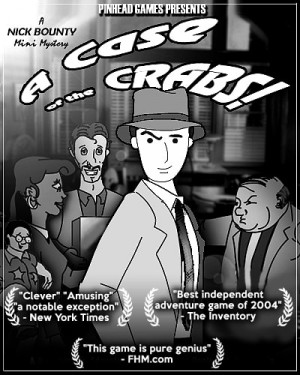 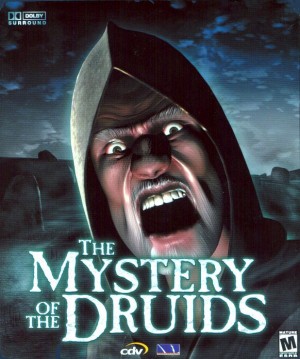 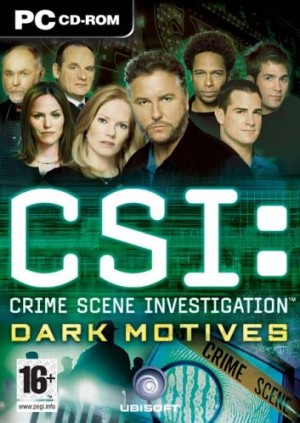 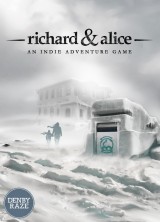 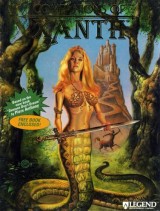