Review for Professor Layton and the Curious Village

Professor Layton and the Curious Village  (2008)

We get a small commission from any books sold.
Written by
Austin Boosinger — April 12, 2008

If Professor Layton and the Curious Village were a small child, I would adopt it immediately. That’s not to say I wouldn’t get frustrated with its behaviour sometimes, as it can be absolutely brutal when it wants to be. But with its unique, adorable charm, it remains just too damn cute to be considered a real pain, and I really love the little guy. It’s so fitting that the game is on the Nintendo DS, as there’s something cozy about keeping this puzzle-athon nestled close to you wherever you go. All cuteness aside, though, Layton also proves to be a surprising child prodigy, excelling in even the most unexpected areas.

The game was birthed from developer Level-5, a company mostly known for one of Japan’s most beloved RPG series, Dragon Quest. Despite the change of genre, this high quality pedigree seemed promising from the start, ensuring that the same kind of time, effort, skill, and polish would be put into this game as their other titles. And it seems they have high hopes for Layton’s success in the long run: they’re planning on a trilogy, with the second title, Professor Layton and Pandora’s Box, already released in Japan.

In this debut on Western shores, right away you’ll notice that Curious Village has a look that’s rare in video games, but familiar in film: an animation style that many will recognize from the likes of The Triplets of Belleville, where buildings are curiously crooked and each character’s features are exaggerated to the point where even the most ugly character has something endearing about them. And while the game is splashed with color, it's all toned-down and not too harsh on the eyes—a nice diversion from the norm for DS owners. 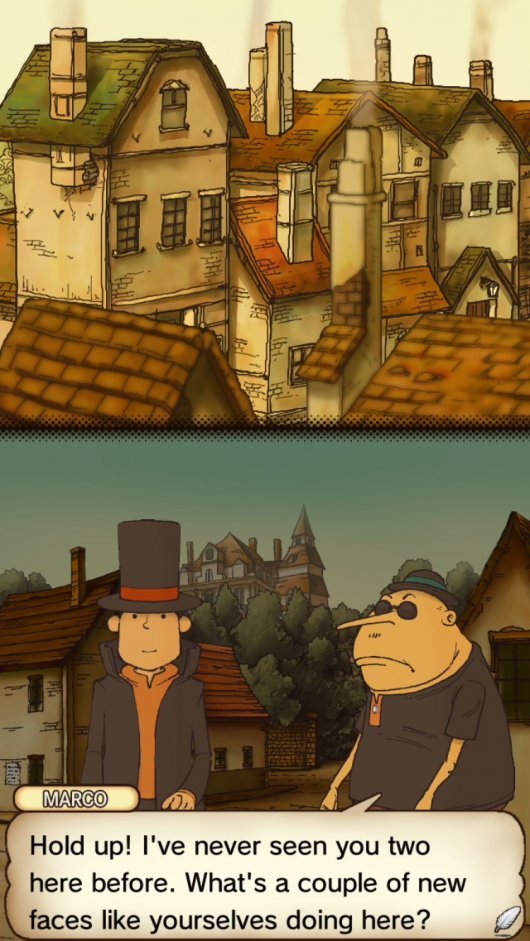 The story involves top-hatted archeologist and puzzle master Layton himself, his young-but-inspired sidekick Luke, and a village full of odd characters. The townsfolk cover the gamut of personality types, often taking each to a comedic extreme, such as a man so angry at his neighbors that he's constantly shaking his fists and sweating profusely. At the start, Layton’s challenge hardly seems dire or live-saving—he’s hired to find a secret treasure. The adventure begins as the puzzling duo head to the town of St. Mystere when asked to investigate a will. The will belonged to a wealthy Baron and the family is quite eager to get their hands on the hidden family treasure mentioned therein: The Golden Apple. But as Layton and his chum delve into the case, several other seemingly related mysteries appear, leading to something much more epic in scope, plot twists and all.

For all its mysterious backdrop, however, the crux of this journey is really its puzzles. You can expect a new puzzle at every turn, and the game offers over 120 of them in total. And that number is still counting—as an unexpected bonus, new weekly downloadable puzzles are currently being offered from the game's official website through the DS Wi-Fi service, extending the game beyond the main storyline even after you're finished. And there's no shortage of gameplay to begin with. Even without the extras, the main game could take you anywhere from twelve to twenty-five hours, depending on whether you opt to breeze through or carefully explore every nook.

The puzzles are often difficult, often unique, and their solutions are rarely obvious, frequently requiring outside-the-box thinking. Just when you think you have the answer by instinct from the get-go, think again or you’ll hear a discomforting buzzer and the word INCORRECT plastered across the screen. Fortunately, the game also includes dozens of easier to middle-range fare that should prove to be much less taxing. There's really no rush to complete the difficult puzzles, either; the game lets you skip most puzzles to come back to them later. If you opt out on doing some altogether, that's fine too, as the game doesn't require you to complete all puzzles. And if you're really stuck, there's the option of using hint coins which you'll discover in your travels. 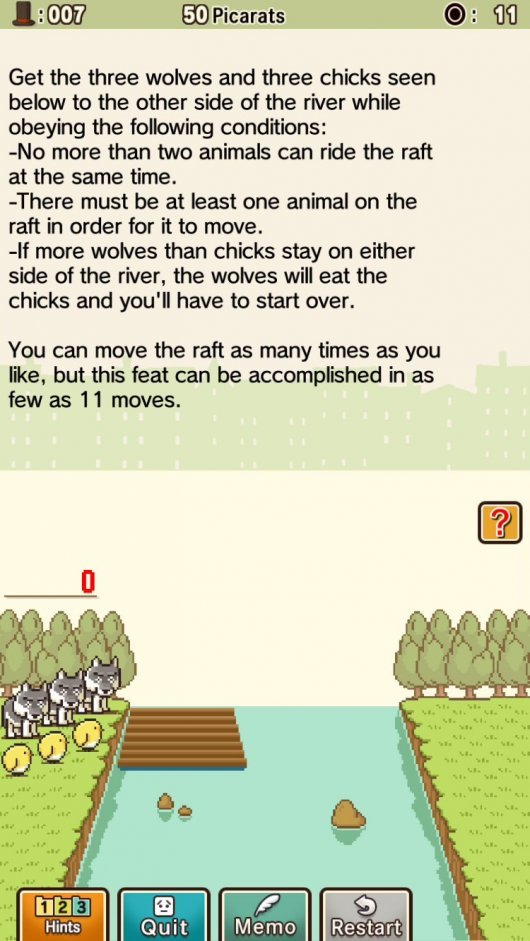 With so many puzzles overall, it should come as no surprise that they represent a wide variety of types. Some are longtime puzzle staples like the all-familiar sliders, mazes, and weight-related challenges, while others often embrace wordplay, riddles, and deceptive language. Even seemingly complex math-based puzzles are liable to be concealing something tricky—not involving complex math—in the solution. Logic is often key here, as well as attention to detail in the pictures or words presented to you. In this regard, it helps that the puzzles are crisp, clean, and pleasant to look at. Even basic shapes are nicely colored and shaded. While lacking the same visual flair as the “adventure” part of the game, they’re something you’ll actually enjoy staring at for hours (and yes, you will be).

The only problem with the puzzles is that, instead of serving as meta-stories, they generally feel like purely contrived obstacles. I mean, exactly how relevant to your case could it be to line up matches to form a cube? And if that suggests the puzzles may have been developed independently of the game's storyline, there’s a good chance they were. The game features the contributions of Japan’s puzzlemaster Akira Tago—a Japanese Will Shortz, if you will—and many of Professor Layton's puzzles would be quite at home in Tago's Head Gymnastics series.

The reality is that Professor Layton is really a puzzle game at heart, making the puzzles' detachment from the plot expected. But because the story is present, the game still comes off as incomplete at times—more like an accumulation of minigames. Gestalt philosophers believed the whole is different than the sum of its parts, and it’s hard not to hope for something more connected here, but it never fully comes together as a cohesive experience. It's one thing to still have a game's puzzle in your head once you've turned it off, but it'd be loads more interesting to be concerned with the consequences of its solution as well. 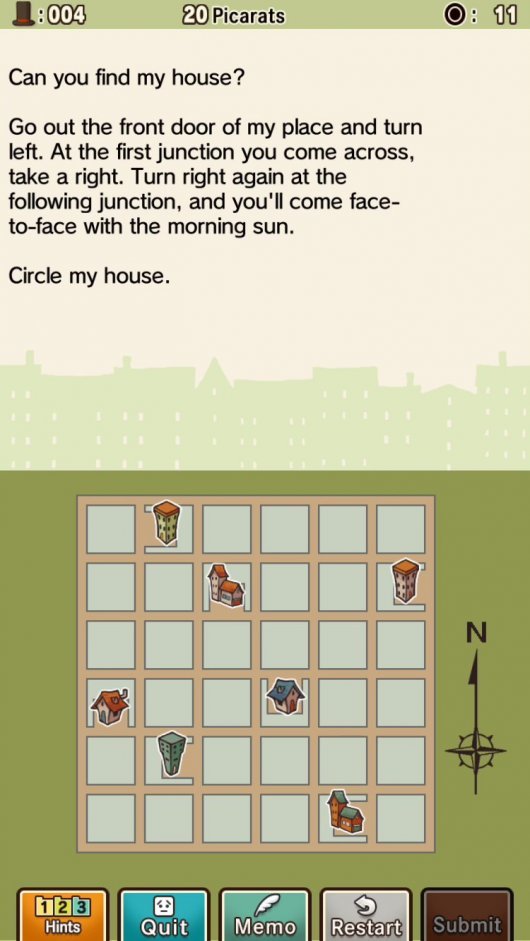 Thankfully, aside from their storyline irrelevance, completing these puzzles in the context of the game soon feels quite natural. The town’s characters are all puzzle junkies, as is Layton, so a series of quick fixes during a case is understandable (albeit laughable) given the scenario. You'll also receive quite the bounty for doing them. Depending on how successfully you complete puzzles (the fewer incorrect tries the better) you're given a varied amount of "picarats". These can be used to unlock goodies and bonuses later on in the game, which you'll find in generous supply. Game art, music tracks, extra puzzles--all you could wish for can eventually be unlocked. In addition to the picarats, the inhabitants of St. Mystere douse players with gifts—puzzle pieces, gizmos, even pieces of furniture—which can be accessed after each puzzle. With a quick tap on the menu screen, these gifts act as mini-puzzles to unlock even more bonuses.

The entire game is handled via the touch screen, which allows for clean, concise control, as well as instant scratch paper on many of the puzzles. Its only downfall is that drawing in numbered and lettered answers can be a temperamental affair at times. Aside from puzzles, you'll be tidily arranging items on your menu screen, or tapping the backgrounds for hint coins and hidden puzzles. But other than that, the player is left with very little that feels like a game. Sure, you click on characters to talk to them. You also click on a shoe to move from one area to the next. But everything is all so predetermined that even the illusion of free will is abolished, leaving the game feeling as linear as a film, simply moving from one puzzle to another. But that's kind of the point. It's all comfort food after you get your puzzle fix. It may be near-nonexistent as gameplay, but it's a fulfilling reward for having completed yet another puzzle, adding to the experience much more than an arbitrary scoring system would. 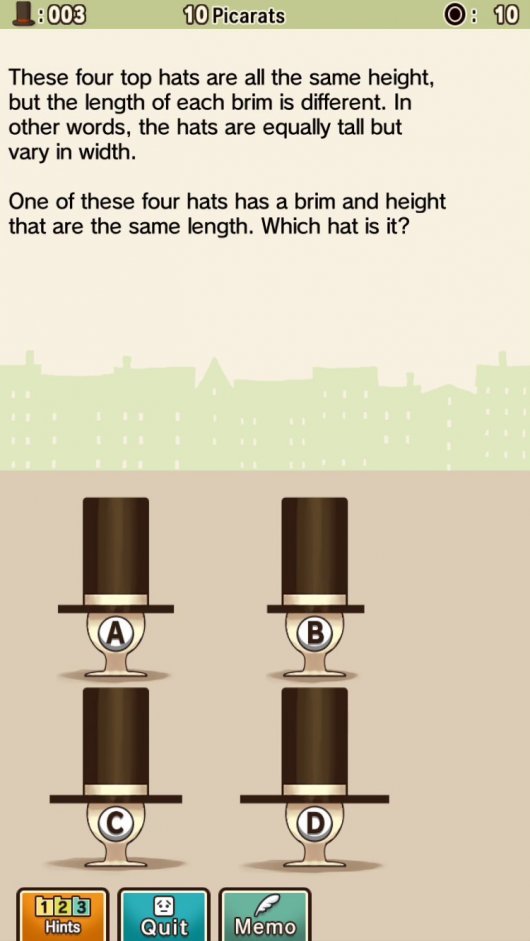 After some time with the game, your ears could be looking for some time off. The music, while unmistakably quirky, lively and wonderful, may grate on the nerves of some. This is primarily a concentration game, after all. It's a fun mix of accordion and xylophone, which feels both mysterious and upbeat, but there is only one song for puzzles, and it's relatively short. The music during the adventuring elements is more varied, but that's not where you'll be spending the majority of your time.

While I'm prepared to recommend Professor Layton and the Curious Village wholeheartedly, it does come with a serious caution about expectations. If you're looking for a well-rounded adventure with plenty of exploration and a fully-integrated storyline, you simply won't find it here. But if you understand that it's essentially a puzzle game with a plot that's interesting in its own right but only loosely tying the gameplay together, you'll find an engaging title with a bouquet of charm, intelligent art design, and plenty of challenge to keep you busy for many enjoyable hours.

WHERE CAN I DOWNLOAD Professor Layton and the Curious Village

Professor Layton and the Curious Village is available at:

Buy this game. It’s fun, it’s cute, and believe me: it’ll work your brain more than any “brain-training” game might say it can. Just don't expect the puzzles to meld into the story.

GAME INFO Professor Layton and the Curious Village is an adventure game by Level-5 released in 2008 for Android, DS, iPad and iPhone. It has a Stylized art style, presented in Slideshow and is played in a First-Person perspective.