Well, Chivalry is Not Dead has been released to the general public for a good while now, and player feedback has been trickling to me slowly but surely, providing useful insight into how the game has been received. I've also had time to reflect on my own impressions of the finished product and the process of reaching that point, so I'll begin with a few words about how I feel it turned out in the end.

From a development standpoint, I think I managed to meet my initial expectations and goals for the project; I wound up including pretty much every feature I wanted to include, and delivered the final product within six short months. I'm very proud of that, given my natural tendency to procrastinate. It seems like I'm gaining more experience in knowing what I'm capable of and scheduling my time accordingly, which I certainly didn't have when I first started making games.

Yet, despite this, what I find myself more concerned about is how Chivalry presents itself as an artistic experience; that is, how far does it come in reaching out and inspiring people in the same way that my favourite works of art do? Admittedly, I don't think I'm the greatest of storytellers, and still have a long way to go before I get anywhere near where I'd like to be in that regard. That said, my impressions of my games are coloured by the fact that I know them inside and out, and therefore cannot see them as an audience would. This is where player feedback becomes important to me. It becomes my measuring stick to gauge where I am with respect to creating my ideal gaming experience, and what I can do to come closer to that ideal in future projects.

First, I should preface my thoughts by noting that although I sought to create a game that would be accessible to anyone regardless of whether they had already played adventure games or not, the areas of the internet to which Chivalry has been exposed the most so far have invariably been adventure game-specific sites. Though I have also attempted to submit my game to some general freeware gaming sites and to the IGF Student Showcase, it appears that most people who deem it interesting enough to try are those who have indeed played at least a few games of the adventure genre before. The observations I share, therefore, will generally be skewed in this direction.

Contrary to what I had hypothesized previously, only a minority of players were disappointed in Chivalry's short length and lack of difficult puzzles. It seems as though the novelty of having many choices in the plot's progression was in itself enough of a satisfying playing experience for a number of people, and this pleased me greatly. One thing in particular that I noticed through forum comments was that several players started their first playthroughs not by having Phlegmwad do what they themselves would do in the same situation, but by attempting silly actions that adventure games don't normally allow them to do, such as stabbing virtually everyone in sight. Considering that I, too, enjoy trying silly things when I play games, I had hoped to provided responses to such actions that acknowledged them in a tongue-and-cheek way, and even went so far as to allow alternate endings to take place as a result of such actions. I tried my best not to make these seem like “death” endings that punished the player for doing the “wrong” thing, but more like portrayals of an alternate reality. Since it appeared to me that people were more amused than frustrated by such endings, I think I succeeded.

Of course, I also soon noticed that when one gives players the option of choice, the first thing some people will complain about is not having enough of it. While I as a player can understand this sentiment – it can be quite difficult to enjoy a game about choice when the choice that you want to make doesn't exist – as a developer, I also recognize the difficulty inherent in allowing for sandbox-esque freedom in a story-based game. Aside from the highly daunting task of creating an exponentially-growing number of possible branches, when one allows the player to do nearly everything, it becomes harder and harder to illustrate the theme and purpose behind your story. Thus, having known this from the start, it was in my best interest to limit the choices available to what I believed would most effectively show the points I was trying to make, rather than provide as many choices as I possibly could.

This brings me to the thematic content of the game itself as first discussed in the second article in this series, namely a discussion of the not-very-clear-cut concepts of “good” and “evil”. Most feedback I received from others didn't really mention much about my treatment of this subject, leaving me uncertain as to whether I succeeded in properly portraying this theme through the gameplay and my writing. I find that I generally err on the side of not being too preachy in my work, couching some of my stronger views in lighthearted humour so as not to offend too many people. However, I also recognize that this may cause players to completely miss the points I try to make, meaning that my personal writing style continues to need refinement in this regard. Still, there were a handful of people who successfully managed to “get the point”, so to speak, signalling to me that I had at least done something right.

Perhaps the most interesting thing I observed regarding Chivalry was that players, by and large, had more difficulty figuring out non-violent, diplomatic solutions to problems than they were with those that involved hurting or deceiving people. This was mainly unintentional on my part, as I didn't particularly want to frustrate people into behaving in ways that contradicted their own personal ethics. Still, I hypothesize that because games typically force one to “win” through violence, acquisition, and/or shrewd trickery, those are the solutions that both gamers and game developers are accustomed to by convention. By contrast, when it comes to the murky waters of negotiation and diplomacy, abstract representations of what constitute success and failure don't have as many conventions in gaming, and are rather perplexing to depict, particularly considering that in a good story, not all characters would react to all well-meaning actions in the same way. Then again, perhaps part of the problem is that my idea of how to respond to characters in a way that doesn't irk them is not necessarily the same as everyone else's, meaning the approach I've taken in implementing this as a gameplay feature might sometimes have created precisely the same “read the game designer's mind” frustration I tried to avoid by making puzzles with multiple solutions in the first place.

With these final thoughts, I conclude the second edition of Adventure Architect; however, in my eyes, it is still quite far from “the end”. Rather, I see this as the beginning of an ongoing collaborative discussion, which I hope will work towards more experimentation and refinement of the adventure game as an interactive story, perhaps morphing into a completely new genre altogether. Henceforth, if you, the reader, happen to have some thoughts of your own regarding Chivalry is Not Dead and this series of articles, I invite you to either leave a comment here or on the forums. And of course, play the game, if you haven't already.

Chivalry is Not Dead 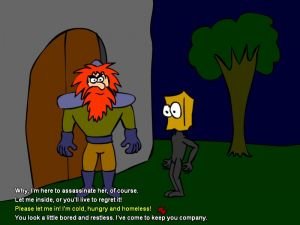 Lee in Limbo
Thank you for an enlightening and interesting look into the making of your game. I look forward to seeing more such insights in future projects, if you can spare the time.
Advertisement
feature