The Lost Crown: A Ghost-Hunting Adventure is the latest work from independent developer Jonathan Boakes, who previously brought us the haunting Dark Fall series. A spiritual successor in some ways and a notable departure in others, The Lost Crown takes place in the same universe as his earlier games, with the return of Nigel Danvers and an expanded role for the mysterious Hadden Industries. This time you play as Nigel, who’s on the run from his former employers at Hadden, after hacking into their files and seeing some dark dealings he wasn’t meant to see. Nigel ends up in the sleepy English coastal town of Saxton, where he hears rumors of a hidden treasure, the Lost Crown of Ganwulf, an Anglo-Saxon King from a millennium ago. He decides finding this crown would be the perfect way to make a name for himself.

The townsfolk may rather he didn’t. There are almost twenty characters in this game, and most will warn Nigel off his quest. Just because you don’t know where something is, they say, doesn’t mean it’s lost. Some things weren’t meant to be found. To complicate matters further, Nigel’s boss agrees to let him off the hook if he can prove the existence of ghosts, of which Saxton has plenty, and overnights him some high-tech ghost-hunting equipment. And so you’ll split your time between investigating ghostly haunts and deciphering legends and clues about the Crown, though the two often go hand-in-hand, and if you can help a spirit or two receive their just rewards, or solve the mystery of Saxton’s disappearing cat population, all the better.

The Lost Crown controls like a traditional third-person point-and-click adventure game. As you sweep the mouse across the screen, the cursor will change to show if you can interact with something or not. You can look, take/use/talk, move to the next screen, or “apply inventory item.” That’s right, instead of leaving you to try every item on every hotspot, the game will tell you explicitly if an area requires an item or not, and generally the item you need to use is fairly clear. Even if you did have to employ trial-and-error, it wouldn’t take very long, as though there are dozens of screens, each one no more than two hotspots, a good number of which are only for show, with no real interactivity. 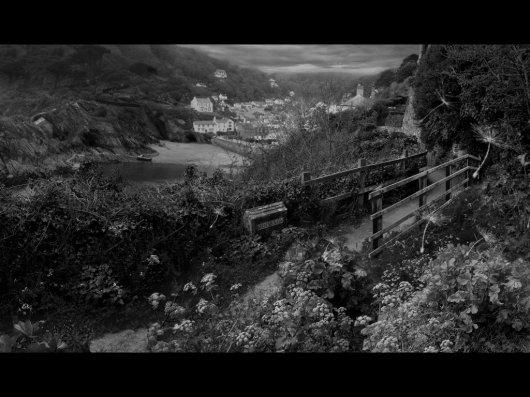 Most of the time, the inventory item you’ll use will be one of four pieces of ghost-hunting equipment. The Electromagnetic Fluctuations (EMF) Meter is used to observe ghostly changes in the environment. The night-vision camcorder can sometimes see things invisible to the naked eye (or provide a pathway through a pitch-black area). The miniature tape recorder can pick up Electronic Voice Phenomena (EVP), conversations from the other side. And the digital camera can capture still photographs you can save and look at later. The astonishing thing about the ghosts of Saxton is how easy they are to locate. Take a picture of virtually any spooky area, and you’ll see an amazingly clear image of a ghost, while your miniature cassettes will pick up conversations plain as day. It’s a wonder there’s anyone left who doesn’t believe in the supernatural.

Even with the dead population seemingly outnumbering the living, they’re still able to give you a good scare now and again. The Lost Crown is most effective in a dark, quiet room, but even in my living room with roommates moving to and fro, I still startled a few times, and can recall at least one gasp. It’s not that there’s a lot of violence, gore, or even danger in the game (no matter what you try to do, you’ll never die or have an irreversible failure), so one wouldn’t necessarily call it a “horror” title; it’s more of a paranormal mystery. Still, there are times where a spirit will pop out of nowhere and make you leap back, or stare balefully at you with glowing red eyes that seem to bore into your very soul.

Those red eyes are among the few colors you’ll see, as virtually the entire game is in black and white. While there doesn’t seem to be any deeper meaning behind it, and most of the colored objects are fairly mundane (like a row of orange life preservers), it does create a very unique aesthetic. The color scheme (or lack of it) also helps the backgrounds—most of which are photographs of real life locations—appear sharper and more genuine than they might otherwise, creating an enhanced sense of reality. Except for some blandly old-fashioned character models, the photorealism and attention to detail throughout—there are even actual videos of the town Saxton was modeled on in the museum’s exhibits—are truly impressive, and offsets the apparitions you’ll find in an interesting, spooky way. The only one who seems unimpressed is Nigel. Near the beginning of the game, when Nigel gets a cottage in Saxton to rent, he finds a crate in his room thrashing about like there’s a rabid wolverine inside. He opens it up, and the clearly empty crate immediately comes to rest. He shrugs his shoulders and moves on with his day. La-dee-da. 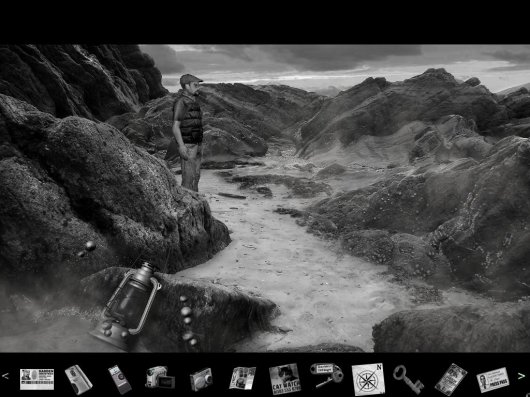 Nigel may be a bit nonchalant, but that doesn’t mean the puzzles will take it easy on you. The first few hours are virtually puzzle-free, but the closer you get to the end of the game, the more intense the puzzles become. They range from the very simple, like walking around a small area picking up pieces of a sign to put back together, to the incredibly complex. One puzzle seemed particularly unfair. You must recreate a multi-note melody on an organ, and while you’re given a few notes to start with, the rest have to be discerned by listening to a recording. If you’re fairly tone deaf, this puzzle will be virtually unsolvable.

Luckily, the game's not all hopeless guessing at sounds, as there are puzzles of enough variety to please almost anybody. Inventory puzzles, logic puzzles, puzzles where you rotate decorative plates, riddle-driven fetch quests, and more. Most of the puzzle solutions will come from paying careful attention to the mountains of information you’ll receive as you go. There are several books to read, as well as journals, newspaper articles, and museum exhibits. To complete the game without a walkthrough, you should closely scrutinize every nugget of data, no matter how seemingly inconsequential. Though, to be completely honest, even if you don’t pay a whit of attention, even some of the hardest puzzles will only take ten minutes longer by randomly turning every millstone or spinning every gear until you stumble across the answer.

Whether you’re on the ball or guessing your way through, either way you’ll have to endure a lot of Nigel saying "That’s not right” over the twenty-plus hours of gameplay. It becomes very clear early on that there was only so much time available in the studio to record this game, as many vocal samples are re-used to the point of absurdity. If you love clicking on hotspots, you’ll hear Nigel say “Symbolic images, or ancient graffiti?” possibly two or three dozen times in different locations. Other times, you’ll be having a conversation with someone, when you’ll suddenly recognize a line of dialogue as being identical to the way they described some inventory object you showed them a few hours ago. You could even forgive this if it didn’t make Nigel seem like such an oaf. When there’s a ghost staring you right in the face, and all he can think of to say is “Am I alone in this place?” for the 30th time, you’ll wish the developer could’ve scrounged together the money for another few hours in the recording studio. 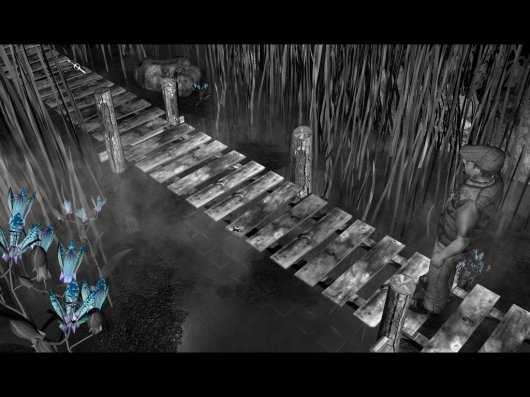 For that matter, you’ll wish the game's budget could’ve afforded some better voice actors. Though a few of the townspeople are voiced competently, or even well, many of them are difficult to suffer through. Nigel himself is a complete disaster, adding strange pauses to the middle of his sentences and emphasizing words for no reason. “Do you live … … near here?” At least players could have been given the option to turn voices off, as you could certainly do better with your imagination, but you're not even allowed to skip a conversation forward. So if you should happen to click on the ocean again, you’ll have to suffer through yet another excruciating round of Nigel shouting “Hello!” at it, then making some remark about “next stop, Norway.”

Turning the volume off completely would be a tragedy, however, as almost all the other sounds in the game are well done. When you enter a haunted area, the background music is soft and eerie, and does a wonderful job of drawing you into the environment. The incidental sound effects, like a sign creaking in the wind or Nigel stepping over some broken plates, are perfect. Most remarkable of all, the EVP cassettes you collect sound absolutely wonderful. The creepy mutters, the bangs and crashes, the otherworldly screams, are all terrific, and will foster a true sense of unease within you.

Ultimately, it’s the setting of The Lost Crown, between the brilliant sound design and the superb art direction, that will give you the most pleasure, and a great deal of praise for these elements is due the game’s creator, Jonathan Boakes. Except for some graphical effects, Boakes created the entire game, including the story, the puzzle design, and the art, wholly by himself. He even provides the voice of Nigel, though maybe that’s a point against him. As a work of art created by a single dedicated developer, it's easy to be mightily impressed by this game, but as a product competing for your entertainment dollar, it doesn’t matter if it was created by one person or a hundred. Is the game fun or isn’t it? Well, that depends. There’s a certain messiness in many elements, from the awful voice acting to the repetitive dialogue, through sometimes unfairly difficult puzzles, culminating in a bizarre non-ending that leaves a half-dozen plot points unresolved. If those caveats aren’t deal-breakers for you, however, and you’re looking for a lengthy, unique adventure title with tons of challenging puzzles and a bit of mystery, you’ll find it in The Lost Crown: A Ghost-hunting Adventure.

The Lost Crown is beautiful to look at and good for a few scares. If you have the patience to get past its many rough edges, you’ll find a thoroughly playable adventure underneath.

GAME INFO The Lost Crown: A Ghost-hunting Adventure is an adventure game by Darkling Room released in 20082008 for PC. It has a Stylized art style and is played in a Third-Person perspective. You can download The Lost Crown: A Ghost-hunting Adventure from: We get a small commission from any game you buy through these links.
The Good:
The Bad:
The Good:
The Bad:

What our readers think of The Lost Crown: A Ghost-hunting Adventure

4.5 stars out of 5
Average based on 21 ratings
Your rating

From start to finish...a perfect adventure. Read the review »