I listened to a group of gaming journalists recently debate the reasons for the decline of adventure gaming in popularity. Not exactly an original endeavor, to be sure; they arrived at the tired conclusion that the Internet era of instant gratification is to be blamed for breeding a culture of impatience, and adventure games with all their "thinking" just couldn't keep up. The new Future Games adventure Next Life (otherwise known as Reprobates) is a firm reminder that adventure games themselves have done their fair share to grind the genre to a screaming halt.

Next Life is a third-person, point-and-click adventure game that follows the story of Adam Raichl, who begins the story by engaging himself in a violent car crash that may, or may not, have been fatal. Adam resembles your everyday young, dark-haired American--he looks like he'd be comfortable with the voice of George Stobbart circa 1996. However, Adam is from Prague and sounds like an aging Russian philosopher. After his accident, Adam wakes up, seemingly as healthy as ever, on a deserted island with ten cabins, a bunch of odd strangers from various countries around the world, and a foreboding bell tower up on the cliff.

The next six days will find Adam exploring the island, conversing with his new neighbors (including welcoming new ones), picking up a whole lot of sticks, stones, and grass, and living through multiple lengthy, puzzle-driven nightmares in an attempt to discover exactly where he is, and whether this is really what the Next Life is all about. Let me be the first to say that, boy, I sure hope the afterlife moves a little faster than this game, which crawls and sputters at an agonizing pace that sucks all the excitement and intrigue out of what should be a much more interesting experience. 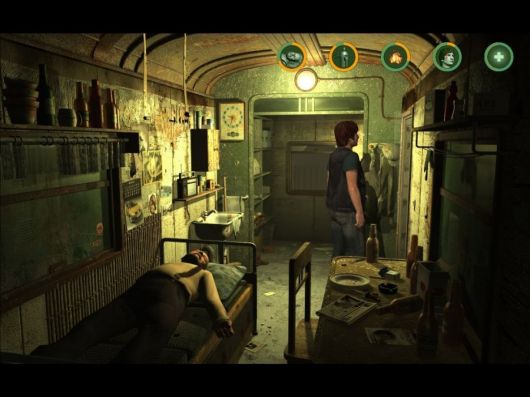 Put yourself in the shoes of someone who awakens on a strange island, surrounded by equally confused strangers, and may or may not be there because he's dead--oh, and there's a large bell on the cliff that can put everyone to sleep with three rings. If that was me, I would be pretty freaked out. Adam, however, lumbers through his adventure at a crippled snail's pace, taking ludicrous amounts of time to walk across the screen to look at various hotspots, and delivering his lines with all the urgency of a Sunday night pizza order. I don't know why voice acting has become such a problem in modern adventure gaming but not only is the main character unemotional and ill-suited for his own voice, the supporting characters are comedically hammy in their various accents at moments that are presumably of the utmost seriousness. This is a game worth playing on subtitles.

Besides the voice acting, other technical aspects of Next Life are acceptable—the graphics look a bit dated, and characters sometimes appear a bit flat and out of proportion in close-ups. But the visuals are not disconcertingly poor, and the cutscenes can be impressive. The vast majority of the game has no music, just ambient noises such as sea waves. The effect is actually an increased sense of isolation, which fits well with the game's intentions.

Exploring the island that you're on, however, can really be a chore. There's a very interesting design decision at work: each day the camera angles change, allowing you to see the same part of the island in many different ways. This is actually rather cool--except the design of the island and the various transition hotspots are woefully disorienting, and so navigating the island just keeps inventing new ways to be confusing. The exit hotspots are small and tough to hunt for--thankfully the hotkey 'E' is provided to illuminate exit hotspots, but unfortunately they disappear quickly so you may find yourself leaning on the 'E' key at various times just to figure out where you're actually going. Adam is a slow walker, and a very slow turner, and pretty much dreadfully slow at everything else you'll require him to do—the obligatory double-click to run option is present, but even the running motion is noticeably lethargic. It is, at least, a small salve that a double-click on exit hotspots gets you out of the screen without waiting for Adam to cross the entire scene. 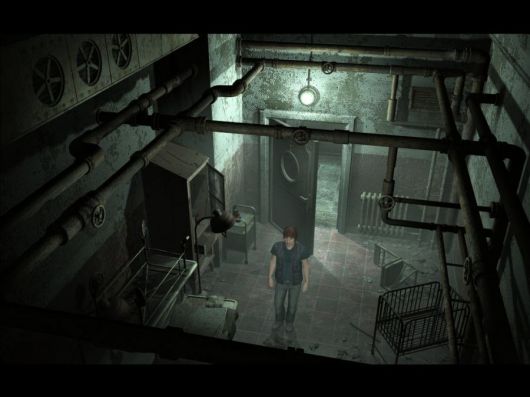 Besides being slow, Adam is also apparently very stupid; he usually has no inclination of how to solve a puzzle on the island until he's gotten some sort of clue or prompting from another islandmate (honestly, is there really anyone who doesn't know how to make fire with dry leaves, sticks, and stone?). Small trigger events generally scatter the islanders all over the place--which means you'll be engaging in constant exploration and backtracking to find the dialogue tree you're looking for. The old adventure axiom of "Stuck? Talk to everyone again!" may have never been more true. The pure difficulty level is actually reasonably low; puzzles are easy and intuitive, as long as you’ve talked to the right characters and set off the right triggers. The challenges never vary much from the simplistic object combination/scavenger hunt type, and inventory items illuminate over hotspots when they become usable. The dialogue writing is decent and relatively believable--though as mentioned, turning off the voice acting is recommended.

As if to rub salt into a wound, the game forces upon the player a ridiculous life bar--as you meander around the island (which you'll do often) the bar decreases and must be refilled by the cookies and water that are provided you anew each morning. It never plays a serious role in the game and serves just as an annoyance to deal with at various times, especially since it drops quickly when you climb up and down the cliffs. Still, it’s not as though dying is ever a concern because you’re provided far too much sustenance—so it’s just an exercise in patience to keep the life bar from getting too low. 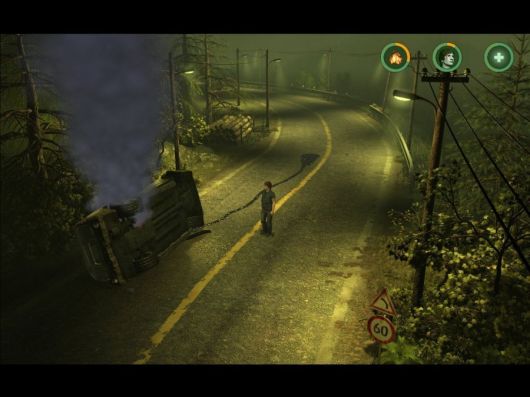 The game even bungles its true chance to shine: the lengthy nightmare sequences. At points these sequences are atmospheric and incredibly creepy, reminding of the best moments of Sanitarium or I Have No Mouth.... Those moments are consistently broken up, however, by horrible action-ish puzzles that seem like cast-offs from In Memoriam and more aggravating backtrack scavenger hunts. These unique puzzles involve such lunacies as guiding a ball (with the arrow keys) through a maze of targets while avoiding the evil orbs that are bouncing around the playing field. If you fail, you’re free to simply try again as many times as you wish. Somehow this puzzle is supposed to represent the player-character keeping his heartrate down; if I could explain the correlation, I certainly would.

The end effect of all this plodding about is a large amount of apathy about our completely unlikeable main character or what exactly he has stumbled into. Next Life is fairly lengthy, probably 15+ hours of playtime, but it's not quality time because of the abundance of backtracking and slow animations. The admittedly interesting story loses momentum so quickly that the events of the final couple of days completely fail to resonate, an unfortunate but inevitable result of a game that displays a frustrating inability to keep moving at any sort of comfortable pace. It's such a compelling concept, ripe for so many interesting ideas and theories, that the total absence of execution is that much more disappointing.

The great narrative potential is undermined by the dreadful pace, which will probably cause apathy to take hold long before the conclusion of the story.

GAME INFO Next Life is an adventure game by Future Games released in 2007 for PC. It has a Illustrated realism style and is played in a Third-Person perspective.

What our readers think of Next Life