Ever since news of Nintendo's Wii console started to manifest itself to the public, gamers have eagerly speculated about a potential revival of the adventure genre that would result from its offerings. Not only does the Wii's remote-control capability make it ideal for point-and-click gameplay, its motion-sensing technology allows for far more freedom of action than what is normally afforded when all you have at your disposal is a keyboard, a mouse, and perhaps a gamepad. Now, the first-ever Wii-exclusive adventure game, Capcom's Zack & Wiki: Quest for Barbaros' Treasure, has arrived on the scene, promising to finally bring that fresh new feeling to adventure gaming we've been waiting for all this time. What remains to be seen once we look inside its shiny packaging, however, is a bit of a different story.

You play Zack, a young pirate apprentice with lofty dreams of fame and fortune, to be found in a legendary secret treasure of immense proportions. If this synopsis sounds eerily like a Monkey Island clone to you, all similarity ends here. The clever wit, amusing plot twists, and character development present in the Monkey Island series are nowhere to be found in Zack & Wiki, replaced instead with the one singular goal of finding treasure. That's it. There's no real insight to be found in why finding treasure and becoming famous is so important to Zack, and as such, I had more than a little trouble empathizing with his plight. It could be that I've just been brainwashed by too many movies, novels, and songs carrying the message that riches aren't everything, but in the end, Zack really felt more like a pawn I manipulated on the screen than a real character with real hopes, fears, and desires. Understandably, this may not be an issue for all gamers, but it significantly lessened my own motivation to keep playing, at least in comparison to adventure games with more interesting main characters.

Supporting characters fare no better in their depth. There's Wiki, Zack's magical golden monkey sidekick, who reminds me a little too much of Pikachu from Pokémon; a crew of friendly pirate rabbits; a rival pirate captain called Rose, who acts like your average bratty preteen anime girl; and Captain Barbaros' talking skull, whose remaining body parts are the key to finding the legendary treasure you're searching for. They are a little bit cute at best and very irritating at worst, yet no matter what happens, any changes in their actions and treatment of Zack are either nonexistent or horribly clichéd. Their dialogue lines, spoken purely through text with the occasional audible noise or single word uttered for effect, also seemed completely dull to me even when it was clear that they were supposed to be funny. This could be an issue with localization, given that the game was originally in Japanese. Nevertheless, given the relative translation quality of games such as Capcom's Ace Attorney series for the Nintendo DS, it's far from a convincing excuse. 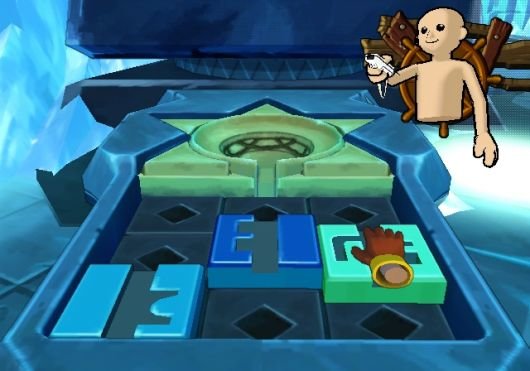 The stylized, cel-shaded art style in which the characters and their world are rendered makes up a little bit for their complete lack of personality, though not by much. There are several locations to travel to, including a jungle, an ice cavern, a volcano, and a haunted castle, each with its own uniquely appropriate atmosphere – the jungle, for instance, is bright, green, and cheerful, while the castle is dark and creaky. Character animations are a lot of fun to watch as well, Saturday morning cartoon-like as they are. In particular, seeing Zack fall inside every treasure chest he tried to open due to his small size never failed to make me smile.

That said, what is by far the most impressive aspect of Zack & Wiki – and perhaps the main reason most people would feel inclined to try it out in the first place – is its Wii remote-driven gameplay. Most of the game's control scheme is actually pretty traditional for seasoned adventure gamers, in that you simply point and click on items on the screen in order to have Zack walk over and interact with them. However, for many activities that would normally just occur as animations in a typical adventure, here you actually get to perform the movements necessary for them. Examples of such movement range from the simple act of rotating the Wiimote to turn a key through a door to sawing down a tree by holding the Wiimote sideways and quickly moving it towards and away from you.

This motion sensitivity makes for a very immersive gaming experience... or at least, it would, if the controls were always intuitive. In practice, Zack & Wiki both hits and misses the mark in this regard. While some movements feel natural enough, others tend to be awkward, such as certain instances in which I had to contort my Wiimote in some strange position just to get an object properly rotated on the screen, then press the A button, which by then was on the wrong side of my hand. Furthermore, I should stress that some of the game's more repetitive motions can be rather tiring on the arms – a fishing puzzle comes to mind here – making the game less accessible to those with physical conditions for which such exertion would pose problems. Slightly less of an issue is the hand-eye coordination and timing required for other puzzles, such as hitting fireballs at things with a tennis racket. Although I didn't have an awful lot of trouble with them, they could potentially be frustrating for players who prefer avoiding action sequences in games. 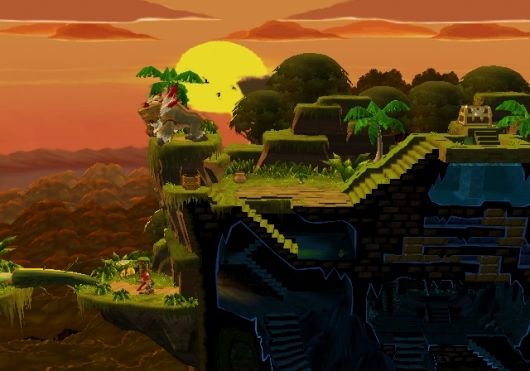 The overall structure of Zack & Wiki is a little more akin to a platformer than a traditional adventure game. Gameplay is divided into separate stages, each of which presents one self-contained puzzle taking place in a single scene; completing one stage results in unlocking others as you go along. Personally, I appreciated this separation, as it meant that everything I needed for solving the puzzle was right in front of me and I didn't need to do any tedious backtracking in order to find some tiny object hidden in some random location that I couldn't spot the first time around. Still, those who enjoy the freedom of movement offered by having many different locations and puzzles available at once may feel a little constricted in this regard. That said, the puzzles do manage to provide a substantial challenge, particularly once you get to the later levels. Most of them involve actual logic rather than guesswork, and some are impressively creative. A personal favourite obstacle of mine involves solving puzzles on both sides of a mirror, attempting to get rid of the “mirror” version of Zack guarding the level's treasure. Another one entails stealing a flute from a tribe of savage jungle creatures, who you must prevent from seeing you lest they boil you in a stew and munch on your remains for dinner.

In general, I would consider the game's puzzles entirely fair if it weren't for one major annoyance: the prevalence of sudden, unexpected deaths. Dying in adventure games went largely out of vogue by the late 1980s, and for good reason, I think. While it may be funny to watch nasty things happen to your character at times, it quickly gets tedious when you have to replay a significant amount of the game just to get back to where you were before. Plus, in many cases, there seems to be little or no obvious warning that you're going to die; some benign-looking objects actually wind up being lethal, while dangerous-looking ones turn out harmless, meaning that you often can't tell whether an action will kill you unless you try it at least once. There's no save feature present to counteract this, yet Zack & Wiki's developers did make at least some attempt to reduce frustration by adding a “revive” option, allowing you to try again from the point immediately prior to your demise. Unfortunately, this option is tied to the number of Platinum Tickets you possess, which you must purchase using coins found in levels. If you've run out of said tickets and don't have enough money to buy new ones – which happened to me often, to tell you the truth – you have no choice but to start again from the beginning of the stage.

An in-game hint system also exists, which I would have appreciated very much were it not for the fact that it wound up being next to useless. Similar to the “revive” option, asking for a hint in a level will cost you an Oracle Doll, another item that you need to buy with your coins. What exacerbates the situation is that the hints you ask for are not context-sensitive, meaning that the hint you get may be for a portion of the puzzle you've already figured out, effectively wasting the doll you just used. Eventually, I stopped using the hint system altogether, pooling my money towards buying more Platinum Tickets and consulting my trusted friend the Internet for help when I needed it. 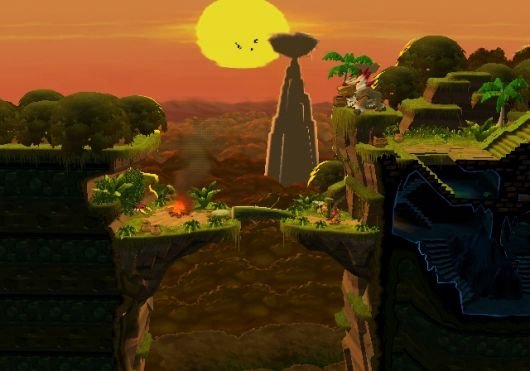 Finally, there's a scoring system at play in each level, referred to as “HirameQ”, which is apparently some kind of Japanese pun on “IQ”. Evaluating you on how precise you are at finishing the level, i.e. how few “mistakes” you make, it seems to exist to provide replay value more than anything else, particularly given that the scoring does not have any effect on whether or not you clear a stage. Also providing replay value are additional secret treasures hidden throughout levels, as well as a bonus rhythm game to be played by shaking the Wiimote in time to some music – the latter of which I found painfully difficult, and I normally do well at rhythm games. These, too, are not essential to progressing through the game, as far as I can tell, which is fortunate, because I never felt any real incentive to proceed with them.

Overall, Zack & Wiki's gameplay is a fun attempt at adding something new to the adventure genre, yet its occasional unfairness and lack of meaningful story elements prevent it from being a true classic. I would venture to say that it feels more like a tech demo than a fully realized game a lot of the time. Still, what Zack & Wiki: Quest for Barbaros' Treasure does contribute to the genre is very significant in its own right, as a first step in moving adventure games towards a more immersive experience. Hopefully, it will inspire more developers to evolve these gameplay innovations and perhaps even integrate them seamlessly with strong narratives. If and when that happens, we might just get that great revival of adventure games on the Wii that we've been waiting for all this time.

While not spectacular as a game in and of itself, the gameplay innovations it presents to the adventure genre might make it worth a try.

GAME INFO Zack & Wiki: Quest for Barbaros’ Treasure is an adventure game by Capcom released in 2007 for Wii. It has a Comic cartoon style and is played in a Third-Person perspective.

What our readers think of Zack & Wiki: Quest for Barbaros’ Treasure