Review for Cleopatra: A Queen’s Destiny

We get a small commission from any books sold.
Written by
Austin Boosinger — November 20, 2007

When I first heard the title Cleopatra: A Queen’s Destiny, I cringed for two entirely different reasons. First, I had an image of a cheaply-made game for children. "A queen’s destiny"—it reminded me too much of cheap Disney spinoffs for preteens. The other reason was the fear of this game falling into the potentially gag-inducing “edutainment” genre, which often encourages people to learn at the sacrifice of gameplay, making a book on the subject more than preferable. Much to my sweet delight, however, Cleopatra falls into neither category. Unlike the made-for-money or made-for-learning adventures I was dreading, there’s a fairly intriguing story here, topped with some interesting characters plus a handful of fun puzzles and colorful locales. My initial enthusiasm didn't quite hold up to the end, however, as the game just isn’t substantial enough to ever really shine.

The title actually proves to be misleading, as Cleopatra herself is quite tangential to the story. Luckily, in her supporting role she adds greatly to the time period and historical setting. The events of the game all take place before her stint with Caesar and Mark Antony, in the city of Alexandria (the then-capital of Egypt). Due to Cleopatra’s rivalry with her husband-brother Ptolemy, the city is in the middle of a civil war. You play the game as Thomas, an astrology student during Cleopatra’s rise. Thomas’ mentor, Akkad, is said to be busy with a commission, but Thomas walks to the observatory to find nothing but blood (and, of course, a few clues). This begins a search for Akkad and his daughter Iris, with whom Thomas is quite smitten. Starting only with a toga, sandals, and his wits to guide him, it’s up to Thomas (and you) to uncover the mysteries behind their disappearance.

Having previously worked on The Egyptian Prophecy, French developer Kheops Studio seems to be in familiar territory here, supported by the historical research necessary for this fictional side-story of Cleopatra’s time. Unlike that game, however, you shouldn’t expect to learn much from Cleopatra. This game is best viewed as pure entertainment with the benefit of wandering through real historical sites such as the Library of Alexandria. 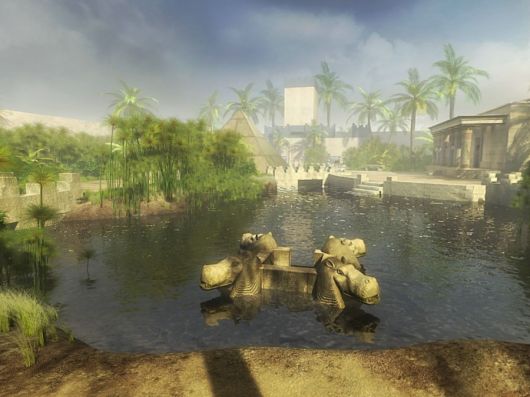 The entirety of the game is explored in Alexandria, with only five or six main locations, but they’re all unique enough to revisit several times without feeling old. Right from the opening screen in the garden of the Observatory, you’ll notice the rich, vibrant colors the game has to offer. They’re nothing to put Van Gogh to shame, but they fit the mood of the game well, with each area demonstrating a character of its own. Ambient movement in the scenery is rare but extremely well done when used, including such things as ripples in the water and the slowly opening jaws of a crocodile. The music comes in stealthily, giving you nothing but birds chirping one second, and swelling to a crescendo of stringed and wind instruments the next, accompanied by the meditative rhythms of hand-drums. The style falls somewhere between culturally appropriate and John Williams-esque fare.

The interface will be instantly familiar to anyone who's played a Kheops game before, or any other first-person games since the days of Myst. The player traverses from one node to the next, creating the effect of an interactive slideshow. Unlike static node-based games, however, Cleopatra adds 360-degree panning to the mix, and as you'll be collecting a lot of inventory items along the way, you’ll have to do a lot of turning around on each screen to make sure you’re not missing anything.

But chances are you won’t. Cleopatra never tricks you with its obstacles, opting instead to hold your hand, though not too tightly. Many of the puzzles have a mildly challenging but logical solution. The difficulty ranges from rather easy to medium, though some of the former may prove a bit tedious. Several will have you looking at formulas to create various tinctures. These formulas describe what you need, requiring you to add exact amounts of powders and roots over and over, making the game feel more like factory labor than an intelligent, entertaining puzzle. This isn’t always the case, however, thanks to a few clever puzzles that even things out. One particularly gratifying puzzle involves getting a catapult to work with the most unlikely of objects, such as ordinary household items. 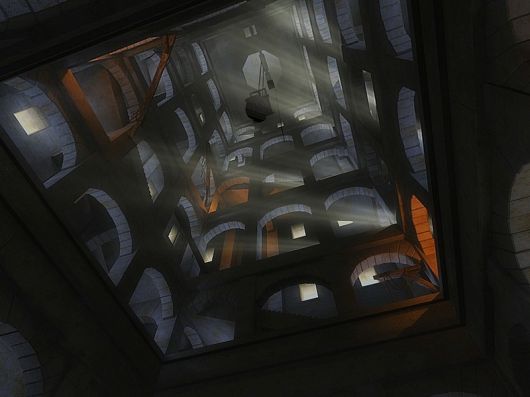 Astrology initially promises to be important in this game, but besides a few puzzles involving astrological signs, it plays a light, somewhat unnecessary role. Before starting a new game, a zodiac appears, allowing you to choose a sign to represent your character. Depending on your choice, there will be good days during certain puzzles, and bad days at others. It doesn’t make too much of a difference, as there is no “easy sign.” Bad days create a brief rain cloud on the screen, meaning additional steps will need to be taken to complete a puzzle. This doesn’t offer as much replay value as it may sound, since playing with a different sign only means longer puzzles, as opposed to alternate story paths or endings. The longer puzzles usually amount to doing the same thing over again or fixing a broken object—nothing too exciting for even the most diehard of puzzle fans. Credit goes to the developers for trying something new, though unfortunately the feature just ends up feeling underused.

The story isn’t going to excite, either, but it’s enough to stay intrigued. After an hour or so into the game, you’ll come to grips with the fact that it isn’t much about Cleopatra at all, but instead involves you searching for your missing friends. Doing so involves taking over Akkad's work to continue a divination he had been working on. In what seems to be a simple task of deciphering stars, the story unfolds as something larger, and soon (along with a few twists) it’s no longer obvious who you can trust. The plot is relatively predictable, on par with that of a Hollywood film, but it’s also fun for the same reasons. And while it’s overly dramatized and silly at times, the plot gives the game the oomph it needs to keep you from falling asleep between puzzles.

You’ll interact with a handful of well-detailed characters, each playing a crucial role in the plot. You’re not likely to get attached to any of them, but you’ll enjoy them while they’re around. Among others, you’ll meet the hunchbacked Kordax, who appears suddenly in the story with a calm, but curious demeanor, and you’ll cross a surly crocodile guardian, who proposes a strange bargain—he offers to let you past his gator, but only if you help him prepare his death. Each character has a range of motions, but they seem to move unnaturally, often repeating one gesture too often, giving the effect of an animatronic at a theme park. Also, their faces remain stoic while their mouths move, which only adds to this feeling of disbelief. Talking to others brings up a dialogue tree, giving you two or three “options” as to what to say, though they all really end in a similar way and you’ll want to exhaust your possibilities anyway to avoid missing any clues. Surprisingly, considering the possible depth of historical information, dialogue is kept brief and lively here. Unfortunately, many of the voice actors make it a little too lively, often over-acting their lines with overwhelming enthusiasm. Still, you’ll feel pleased to come across the other characters, as they help to keep the game from feeling stale. 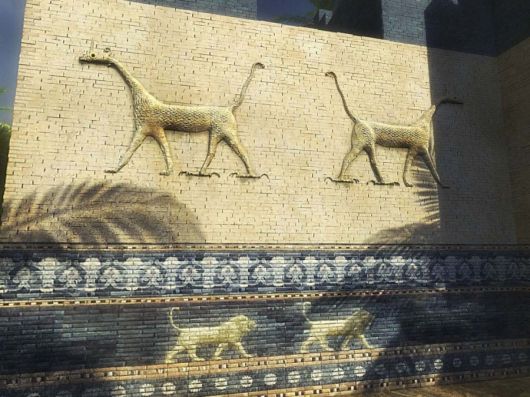 All in all, you'll likely spend 10-15 hours of your time on this game, though it feels even shorter, perhaps due to the handy interface which seems to do all the busy work for you. Only a right-click away, you have a journal of important events, a list of all dialogue spoken, and a map that allows you to transport to any area you’ve visited. The inventory screen is easy to get used to, with tabs for sorting out items you pick up and a separate object combination interface. Previously used in other Kheops games like Return to Mysterious Island, this area displays an empty and unknown equation (with plus signs and question marks) that appears at the bottom of the screen. When two items fit together, they are slotted into the equation, which then indicates how many more items you need to make something new. I am typically leery of the notion of inventory-combining—it often leads to clicking on everything you have, but these equations and the sheer number of inventory items you'll collect really encourage you to solve them logically.

Ultimately, Cleopatra: A Queen's Destiny is not a “must-play” by any means, but it's a solid (if clichéd) adventure. It’s a mixed bag, to be sure. You’ll get your kicks with generally unintimidating puzzles, some of which are clever, although a few become more tedious than fun. The story has a surprise or two, and it’s entertaining if enjoyed for its simplicity and aesthetics. It does, however, sit on the fence between historical fiction and Hollywood drivel, so it helps to enjoy a little bit of both. If you’re in the mood for an Egyptian tale of love, loss, and deception, in a game filled with inventory puzzles and historic locales, the game should provide a nice little diversion. Chances are, however, you’ll forget about it when it’s over, leaving Cleopatra a distant memory behind you.

If you’re in the mood for a light and unintimidating adventure to fill your ancient Egypt whim, give Cleopatra a whirl. Anyone looking for a little more substance will need to keep looking.

GAME INFO Cleopatra: Riddle of the Tomb is an adventure game by Kheops Studio released in 20072008 for Mac and PC. It has a Illustrated realism style and is played in a First-Person perspective.