Nancy Drew is no stranger to the adventure genre. She has been a regular staple in the adventure game market since her first PC adventure, Secrets Can Kill, in 1998. All of the games (seventeen of them so far) have been developed by Her Interactive, and while there have been some minor changes to the games throughout the years with regard to graphics and interface, fans of the Nancy Drew series have a good idea what to expect when they play one of these adventures. But now Nancy Drew has finally made her debut on the Nintendo DS in The Deadly Secret of Olde World Park, and the game looks and plays much differently than its PC predecessors, which is hardly surprising considering it was made by an entirely different developer altogether.

In The Deadly Secret of Olde World Park, Nancy’s best friend Bess is participating in the ribbon cutting ceremony of a new theme park, built by the billionaire Thaddeus Beaumont. The problem is, Beaumont has gone missing and Bess may not be able to cut the ribbon, as her dress and park pass are gone as well. Who better to find those lost items for Bess, of course, than Nancy Drew? But once Nancy sets out to find the dress, she finds other things are amiss at the park. With her boyfriend Ned as her trusty driver, she determines to find out what’s going on at the park and learn about the missing Thaddeus Beaumont while she's at it.

The contrast from the PC titles is apparent right from the start. Deadly Secret is displayed using third-person perspective, so finally you can see Nancy as you control her directly. Naturally, playing on the DS also brings some inherent interface differences. The top screen is used to display the actual locations, cartoon stills and dialogue. The bottom screen features a box that can be toggled to display Nancy’s clue journal (containing her list of tasks) or inventory. It also displays the various mini-games you'll encounter in your travels. Using the D-pad to move Nancy is quite intuitive and easy, and interactive hotspots are very clearly marked by various icons. The stylus is used to choose dialogue options and interact with some of the mini-games, though both the D-pad and buttons are also used at times during the latter. 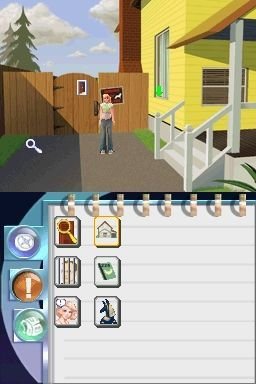 Along with Nancy, you'll meet up with Bess, George, Ned and even Nancy’s father, plus a variety of new characters specifically related to the mystery at hand. All of the characters are presented in a series of still cartoon illustrations. The stills are initially effective in conveying the emotions of the characters, but before long the limited set of panels gets a bit repetitive. What's worse is that the dialogue boxes too often obscure the face of the character that is speaking, and like most DS titles, there are no voiceovers to avoid them. The music is composed of a few tracks that play throughout the game, and only really varies between tense situations and more relaxed moments in the game. As with so many other elements of the game, it soon becomes repetitive and I often tuned it out.

Dialogue options are represented by icons, and clicking on each icon will open up a conversation on that topic. Some characters are unwilling to talk to you at first, or only about certain subjects. In order to learn what you need, a conversation mini-game must be played. Strangely, at times the people you would expect not to be willing to talk to you are more than willing, while others that appear friendly require a conversation mini-game to proceed, making the process seem entirely random. The games get harder the less another character wants to talk to you. Instructions on how to play are given before each game and are repeated every time you play them. These can get a little tedious to click through and it would be nice to have the option to bypass the instructions after the first time through a particular activity.

Despite how Nancy explains them, these mini-games don’t really have anything to do with changing the mood of the person you are trying to talk to, and they consist of such tasks as matching symbols, a slider puzzle, or a pathfinding game. There are five to choose from, but only one is available to you at the start, with the others unlocked as the game progresses. The games are pretty straightforward but they are also timed affairs. Fortunately, the timer is generous, and while I generally failed the very first time I tried each game, I quickly got the hang of them with the exception of the slider puzzle game. The first slider I tried was easy, but the subsequent puzzle was more difficult and I couldn’t figure it out before the timer ran out. I’ve played many a slider puzzle in other adventure games but those have never been timed, so I often avoided that particular mini-game here. In fact, I found myself only playing two or three of the games regularly, and those soon got repetitive as characters were often unwilling to talk. In case you don't get your fill during the main adventure, however, once the games are unlocked, they can be played as standalone activities. 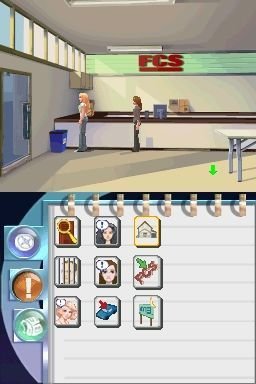 Along with the frequent conversation mini-games, the remaining gameplay consists primarily of examining items and opening locks or other objects by figuring out codes. There are many locks to open and yet another mini-game is used to open practically all of them. At one point, there are two locks in quick succession that use the same mini-game. In this particular game, the player simply needs to align colored dots with proper timing, and while the game is quite easy and the timer very generous, it quickly gets repetitive and loses its appeal part way into the game. The continuity between dialogue and action sequences is also off at times. Too often Nancy will comment on the need to open something after already playing the game to open it. And if you haven't had enough of mini-games along the way, there is still one more towards the end of the game that needs to be played six times in a row. I won’t say anymore about it so as not to spoil the story, but six is way too many regardless of the justification.

With repetitive mini-games confronting you at seemingly every turn, it isn't long before tedium begins to set in. But to make matters worse, there is also the occasional chore to do in the game (which will be familiar to any PC Nancy Drew fans) as you are asked on a few occasions to do something for someone in order to learn information. This usually involves either getting an item, finding another person or doing a favor. There is also a bit of stealth in the game. At times, Nancy needs to sneak to an object or another door without being seen. This is done primarily by staying in the shadows. If you're out of the shadows for too long and get caught, however, you are allowed to try again as many times as needed. These retries are also given if you fail any of the mini-games. As I progressed through the game, it became easier to get through these sections, although it was sometimes difficult to see where Nancy was right away in the stealth portions.

The part of Deadly Secret that is most similar to the PC games is the story. The plot here is quite involved, as befits a Nancy Drew mystery. It’s primarily told through interactions with other characters and the various clues that Nancy finds in her investigation. But while the story itself is interesting, it's not particularly interactive. As the story progresses and Nancy finds she needs to go somewhere else, the game will automatically take you there, making the game a very linear experience. And as clues are gathered, the only involvement the player has with them is reading descriptions when examined in the inventory. There is no active participation in piecing the clues together or in making the story advance. 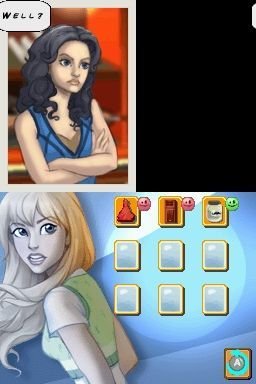 For all of the mini-game filler padding out the gameplay experience, you might think The Deadly Secret of the Olde World Park would be a fairly lengthy game, but this isn't really the case (though it may start to feel that way). I played through the game twice, with the first time taking me a little over three hours; once I had better mastered the mini-games, I sailed through it again in about half the time. At first I liked the mini-games as an alternative gameplay style from the conventional inventory and logic puzzles in most adventures. Unfortunately, that gameplay becomes extremely repetitive and playing the same mini-games stops being fun long before the end of the game. The sneaking sections should pose no problems for anyone, and the low level of difficulty in the mini-games suggests that this game is targeted to a younger audience than its PC counterparts. But younger or older, any gamer deserves non-repetitive and varied gameplay, and there just isn't enough here to hold anyone's interest for long. Equally disappointing is the lack of involvement in the story. This is Nancy Drew, after all, and it would have been nice to actually participate in the mystery with even a moderate ability to choose where to go or what clues are important. In other words, to actually feel like you're playing as Nancy and not just guiding her from one place to another.

The many Nancy Drew fans and DS adventure gamers may be interested in this title, but I can’t really recommend it to any audience. Even for a younger gamer, the repetitive gameplay will likely get boring before the end, and the tedium will quickly be felt by a more seasoned adventure gamer. For those who enjoy adventure games on the DS, there is really no particular use made of the system's unique features; certainly not enough to make up for the monotonous gameplay or lack of interactivity in the story. And while I personally like shorter games, as my playing time isn’t plentiful, a short game should justify its abbreviated playing time with an enriching experience, not consist largely of repetitive filler. The story is interesting enough (and I didn’t figure out what the final outcome would be until the very end) and it’s fun to be able to see many of the characters that have only been in gamers’ imaginations until now, but only the most diehard Nancy Drew fan will find enough benefit to overcome the shallow gameplay.

While the story is worthy of a Nancy Drew mystery, it's really just an excuse for the various repetitive mini-games, and since there's little sense of actually playing as Nancy, this game just isn't worth a full price purchase.

GAME INFO Nancy Drew: The Deadly Secret of Olde World Park is an adventure game by Gorilla Systems Co. released in 2007 for DS. It has a Illustrated realism style and is played in a Third-Person perspective.

What our readers think of Nancy Drew: The Deadly Secret of Olde World Park