#2: The Secret of Monkey Island

"My name's Guybrush Threepwood, and I want to be a pirate!" 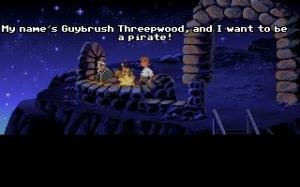 Never has a company produced such a magnificent run of great games as LucasArts did during their golden era, from 1990 to 1995. But they weren't always pumping out the hits in rapid-fire fashion. After the release of Maniac Mansion in 1987, the SCUMM interface brought forth a couple stinkers in the form of Zak McCracken (even though I'm apparently the only guy who didn't like it) and Indiana Jones and the Last Crusade. These games were too difficult, too confusing, and very susceptible to the kinks that were still being worked out of SCUMM.

When 1990 came around, though, the SCUMM system finally reached its potential. With beautiful VGA graphics, much-needed improvements in the interface, and an unparalleled sense of humor, The Secret of Monkey Island established its place in the adventure annals.

The graphics in Monkey Island were light years ahead of the ugly earlier SCUMM games. LEC also made the SCUMM system worlds easier to use. Now, simply moving the cursor over an item would tell you what it is. No more need to click the ridiculous WHAT IS verb and then peruse the screen. Also, in one of the more intuitive interface shortcuts ever, right-clicking on an item would automatically use the most logical verb on the item being clicked. So simply right-clicking on another character would be the equivalent of clicking TALK TO, and then clicking on the character. 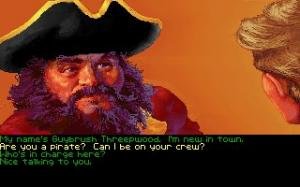 But what immortalized Monkey Island was the sheer insanity of the game. From the moment Guybrush Threepwood steps onto Melee Island(tm), greets the blind lookout, and reads Governor Marley's campaign poster ("when there's only one candidate, there's only one choice!"), it's an unstoppable onslaught of humor. Who will ever forget the sword fights, in which you had to develop a repertoire of insults and proper comebacks? Or the boat salesman, a perfect car dealer satire long before satire was a feasible idea in a computer game. I, or anyone else who has played the game, could go on forever. The game never lets up. The humor is at times devious and subtle, and at times overt and absurd, but I can't remember one single joke that failed from the first Monkey Island, and I don't think I can say that about the three sequels.

But beneath all the laughs and all the hilarity, is an almost tender love story. Well, as tender as you'd expect. Guybrush Threepwood is right up there with Tex Murphy and Gabriel Knight as the most beloved adventure hero because even through the laughs, he was given a very human element. 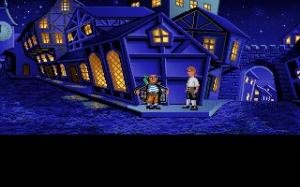 Other games in this countdown have been largely forgotten over the years (yesterday's entry is a perfect example). That is not the case with this game; every adventure gaming fan remembers the first time they played it, and can discuss it at length. I can imagine another ten or twenty years will go by and we'll still all remember this game.

Monkey Island fans are the most loyal fans of any adventure series (I sure felt their wrath sixteen days ago), and for good reason. This is a series that, even if sequels stop coming, will never die. For jumpstarting the golden age of adventure games, for inspiring a legacy, and most importantly for being the funniest adventure game ever, The Secret of Monkey Island is the #2 adventure game of all-time, and could be topped only by... 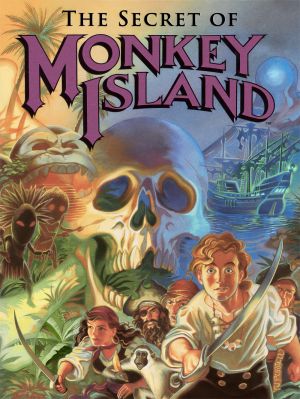