"Alexander, here you are! You're not still thinking about Cassima, are you?"

The rise and fall of Sierra On-Line parallels the rise and fall of graphic adventure games, for obvious reasons, because Sierra was a major part of all the genre's stages. They gave birth to the graphic adventure, nurtured it to its peak level of commercial success when the company was producing six or seven adventures a year, and then as adventure sales began fading, made a series of ill-advised management decisions that culminated in Chainsaw Monday, and nearly drove the final nail in the adventure coffin. The history of the company is at once an inspiring and a tragic one, but it peaks in 1992 with the release of the amazing King's Quest VI.

Coming two years after the technially proficient, but poorly executed King's Quest V, Roberta Williams and Jane Jensen together created an epic game, the epitome of a fairy tale adventure, a beautiful and touching family treasure that still feels magical. The game was so amazing when it was released, game stores would run the introductory sequence in repeat mode on their in-store demo computers. With a beautiful soundtrack, a memorable introduction sequence that featured voice-acting, twelve different potential endings, and one of the most wonderful fairy tale stories ever written, the game as originally released was just simply breathtaking. 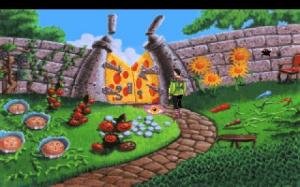 It also made it clear, however, that an era of gaming was drawing to a close. The game came on nine floppy disks, which was unheard of at the time, and took up a massive 18 MB of hard drive space. I remember so clearly our fairly new 80 MB hard drive, and how much shuffling and deleting we had to do to get this game to fit. (For historical reference, Sierra would later break its own record when Police Quest 4 was released on twelve floppies, which I believe is the all-time high) It became apparent that the floppy disk era was about to expire. About a year earlier, the technology of CD-ROM drives had become more and more popular. KQ5 was released as one of Sierra's first CD games, and while it was a neat technological feat, the voice acting was dreadful and the technology really added nothing to the game. Space Quest 4 brought better voice acting, but again, made little use of the technology. 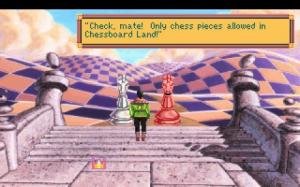 The CD-ROM version of King's Quest VI broke all barriers in 1993, leading many writers such as Peter Spear to declare that the game brought final "proof that the era of CD-ROM gaming is upon us." The floppy version's introduction sequence, which was itself already bigger than most contemporary games at a hefty 7 MB, was refined and increased to a healthy 50 MB. The character portraits were redrawn in higher resolution, and Sierra became the first company to use lip-synching technology (licensed from Bright Star, developer of educational games) in its adventure games. You would expect such new technology to have missteps in its first adventure, but the lipsynching in KQ6 is flawless, and ten years later many major adventure games still aren't making good use of this.

The voice acting also broke new ground for adventures, as Sierra went outside of the studio to recruit Robbie Benson (from the Disney movie Beauty and the Beast) as the voice of Prince Alexander. His voice, brave but uncertain, proved to be a perfect fit. 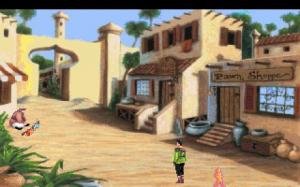 Gaming magazines fell over themselves to declare King's Quest VI the greatest graphic adventure yet, but time was unkind to the game as Sierra alienated their fans into oblivion, and the continuing marginalization of their games relegated this game to forgotten status. I wish, sincerely, that I could sit in front of the computer in Incredible Universe again and watch that introduction sequence for the first time, and remember the day when Sierra peaked. The first Gabriel Knight game was released at about the same time as the CD-ROM version of King's Quest VI, and Sierra was never really the same company after that year (as evidenced by the last two KQ games, which were bad and worse respectively), and will never be again.

All these statements will probably lead people to accuse me of playing the dreaded "historical importance" card again, but I want to state clearly, this ranking is made independent of that factor. I am simply evaluating how great of an adventure this was at the time of its release, and the answer cannot be overstated: this is a true masterpiece. Closing the book on a nine-year era of adventures, and opening the eyes of many to the possibilities that this brilliant new technology held, the CD-ROM version of King's Quest VI is Sierra's greatest masterpiece, and the #3 adventure game of all-time. 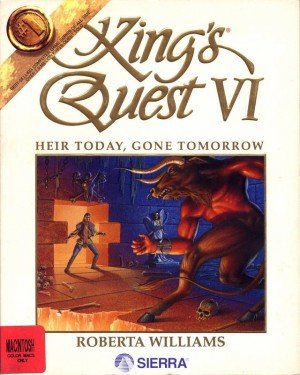