#9: The Lost Files of Sherlock Holmes

"Whatever are you on about, Holmes, so early in the morning?" 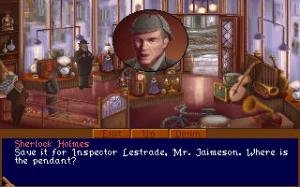 I'm a fan of Sherlock Holmes, I'll say that right at the top here so there's no mistake. I'm also a fan of detective stories and games in general. I absolutely love a good murder mystery. Now, before you go crying unfair bias and saying I give this game too much credit because of my tendencies towards Sherlock Holmes and mysteries, here's the thing: this game is the reason that I love all those things!

The Lost Files of Sherlock Holmes: The Case of the Serrated Scalpel contains what I consider to be the most well-told story in the history of adventure gaming. It is so captivating, so fascinating, so compelling, and (as I would discover later) so amazingly true to the spirit of Sherlock Holmes, it inspired many more of the over 100,000 who would purchase the game to dig deeper into the fantastic legends of Holmes.

From bottom to top, there has never been a more well-executed plot than the one contained in this enthralling mystery through London. The scope of it is amazing; it's one of the longer and truly substantial games I have played. Everything that you could ever love about a detective mystery is perfectly realized here. 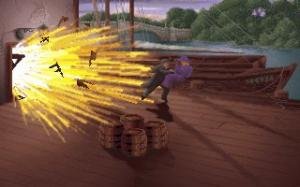 It begins as I suspect all Sherlock Holmes mysteries do: Inspector Lestrade requests your assistance in a murder. He believes it's simply the work of the Ripper, but you know better, and your quest for the truth will take you to more than twenty different locations in London to converse with more than a hundred different people—all the while accompanied, of course, by the inimitable Dr. Watson, who will often be valuable in helping you solve a puzzle.

It's so clear, and thankfully so, that this game was produced by a true fan of Sherlock Holmes. The dialogue is completely authentic and believable, with the English manner of speaking emulated so well, you'd think the game came straight from London (Lost Files was developed in Tempe, Arizona). The traditional mannerisms that distinguish Watson and Holmes so well are preserved perfectly, with no noticeable deviations.

There is not a better word to describe this game than engrossing. Clue after clue, twist after twist, lead after lead, it's impossible to give up because there's always the sense that the big break is right around the corner. Along the way there will be more deaths and some shocking revelations as the truth about the murder of a young actress is revealed. To give you an idea of how complex the plot is, the murderer is captured and forced to confess only barely halfway through the game! Layer after layer is peeled away, and when the game is finally over, to sit back and consider the depth of the story is mindboggling. 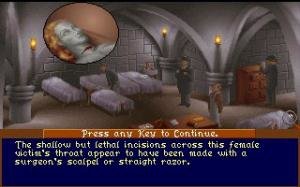 The graphics and sound are mediocre at best for the time period. But this game remembered so well what made an adventure game truly great: plot, storyline, and characters. Even though it's not that pretty these days, I still enjoy playing this game more than the modern visual masterpieces, because it's the rare adventure game that is as compelling as a good mystery novel. The game sold very well, and inspired a sequel that did not sell as well, and (full disclosure time) unfortunately I have never been able to play (believe me, I have tried to find a copy). I have reason to believe the sequel may have actually excelled the original; although I find that amazing, if it's true than just assume those two games are sharing this spot.

Lost Files is easily the greatest mystery game ever produced, and I believe it unlikely that the sheer volume of plot and dialogue could ever be challenged (sequel notwithstanding). Games like these, focusing on the essentials and creating such a mesmerizing experience, make me proud to be an adventure gamer. It's only elementary that The Lost Files of Sherlock Holmes is the #9 adventure game of all-time.

Last time: How about that? The first game that hasn't moved; Lost Files fit just as well into the #9 spot three years ago as it does this year.