"Go, Sir Graham! Go and bring me back those treasures. If you succeed, you will inherit the throne."

Before I even begin today's entry, a few words about historical importance as a factor in this ranking: 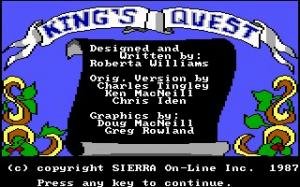 Three years ago, in the previous incarnation of this countdown, I gave much higher weight to historical importance. As a result, Myst and Zork made the list and Maniac Mansion and King's Quest I were in the top ten. I decided with this year to attempt to create a more balanced list; clearly, however, the reaction to Maniac Mansion's placement at #14 leads me to believe that most would rather historical importance be eliminated completely as a factor. Having said that...

It is almost completely impossible for most of us to really understand the PC gaming situation in 1984. Infocom ruled the adventure gaming market with their series of intricate and lengthy text adventures. The ideas that we take for granted in the modern adventure market (like animation, and seeing the characters on screen) were as foreign to those gamers as a "Cryo masterpiece" is to us. A young, visionary couple named Ken and Roberta Williams and their little company called Sierra On-Line were set to change all of that.

IBM needed a game to demonstrate the power of their revolutionary new PC, and Ken and Roberta were up to the challenge, with a vision that was simply ridiculous: let's create a character that can move around on the screen. Are you kidding? You mean you can actually make this little guy walk around the location? He can walk behind a tree, come out the other side, and then come back and walk in front of it? This was the kind of technical feat everyone was calling their friends over to see. 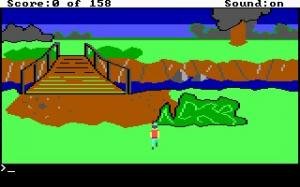 Eighteen years later, I fired up the original version of King's Quest I last month to see how it felt. It was slow, clunky, and beyond ugly. But once I got myself in the proper frame of mind and tried to understand what I was looking at, it was mindblowing. We debate 2D vs. 3D frequently today; in 1984 this was all the 3D that gamers could ever dream of. Sure, I found it frustratingly easy to fall in the moat. But this sort of challenge had never been presented before!

The plot, to us, rings of hollow simplicity and boredom. But eighteen years ago it was a classic fairy tale story; the old, dying king who had been swindled out of all of his treasures, calling on his last brave knight to recover them. The adventure would require journeying undergroud to battle a dragon, and climbing to the clouds to defeat a giant! Those were simpler times, being shocked by the arrival of a game many just didn't believe possible.

I think it's very unfair to say that this game has shortcomings, or that it doesn't hold up well over time (which are admittedly both valid arguments for Maniac Mansion). When King's Quest was released, there was nothing like it, no standards for it to meet. Everything about the game was creating a new benchmark. If AG had existed in 1984, there's no question this game would have received five stars from any competent reviewer. 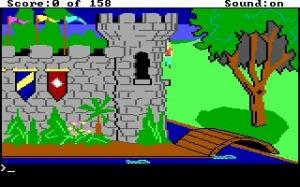 Personally, I was three years old in 1984, and found my thumb a more interesting diversion than any computer game. I wish I had been around to really understand the atmosphere around this game. When I think of games, on any platform, that were truly harbingers of a technological revolution, I think of two games. The first is Super Mario 64, the first true 3D platform game, years ahead of its time and so far beyond the norm that it was hated by many gamers and almost killed the console it helped launch. Ten years before that came King's Quest I, which opened up new worlds only dreamed of before, and helped launch the entire PC gaming industry as a whole.

I don't expect there to be any shortage of people who hate the fact I have included this game. But even if you ignore the "influence" attribute, at the time of its release King's Quest was a five-star work of art with no comparison, and I sincerely believe that if we could objectively measure the "wow" factor of playing KQ1 in 1984, and playing TLJ in 1999, the former would be so much more it would almost be comical. I really would like to place this game #1, but recognizing how truly awful it looks to a gamer seeing it for the first time I felt that would be unfair. Make no mistake, though, there wouldn't be enough games to fill a Top 20 countdown without Ken and Roberta Williams, and their masterpiece. King's Quest: Quest for the Crown is the #10 adventure game of all-time.

Last time: KQ1 came in at #6 last time, and the negative response from many who hadn't even been playing adventures more than three years was so depressing I almost didn't finish the countdown. I sincerely hope that after reading this article, you'll at least try to look at this from a bit more of a historical perspective.

KQ1 was my first adventure game, which I was playing at the age of four on my Tandy 1000.  I don’t think I ever got past that moat though.  I completely support the inclusion of games based on historical significance.  As someone who played some text based MUDs back in the day, I can imagine the shock of seeing the first graphical adventure.