"April. Daughter. I have been waiting for you. Because it begins here, with you, as it always has." 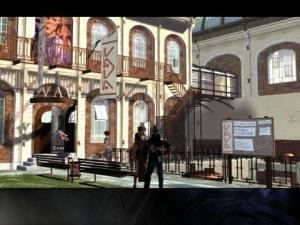 The state of adventure gaming at the end of the last millenium was depressing, to put it mildly. If not for DreamCatcher, we would have had literally nothing to sustain us as adventure fans, and the vast majority of those games were average at best, and first-person to boot. Every indication was that the adventure had finally died for good.

Meanwhile over in Norway, an upstart band of designers calling themselves "Funcom" were preparing their own little adventure game. When The Longest Journey was released in Norway in late 1999, it immediately began making waves throughout the adventure world. Empire Interactive published an English-language version in Europe in early 2000, and the buzz in adventure circles reached ridiculous levels. Yet it seemed to many that the chances of seeing this game in the United States were slim to none.

An equally unknown distributor named Tri-Synergy stepped up to the plate, thankfully, and when word broke in September of 2000 that TLJ was crossing the ocean, a legion of American gamers waited impatiently to see if this was really the adventure savior it was purported to be. How could any game, especially one from a rookie developer, meet those kind of expectations?

Somehow, The Longest Journey surpassed every adventure gamer's dream of what an adventure experience could look and sound like. The animation in the introductory sequence was extraordinary, with a gorgeous celestial soundtrack to match. But it was only the beginning of the adventure. The scope of TLJ is absolutely massive, keeping gamers busy for weeks to reach the end. Most of the contemporary adventure games could barely claim the scope of just one of this game's thirteen chapters! 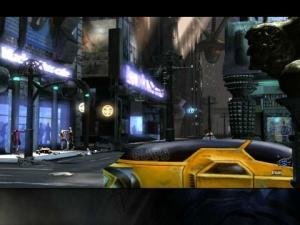 The Longest Journey succeeded in absolutely every technical aspect. The graphics and animation were so far above what we had ever seen in an adventure, it was surreal. The soundtrack was so moving and well-received, Funcom posted it in MP3 format. The voice acting was brilliant, each actor finding the right note of sincerity for their character.

The design was top-notch as well, instantly immortalizing the name of Ragnar Tornquist among adventure fans. I still am in awe of how one person could write this much dialogue, never mind such a vast and expansive story. The dialogue (which is unfortunately profane and adult-oriented in what could have been a successful family adventure) never descends into corniness, quite a feat in such a large-scale world-in-the-balance story. This game could honestly be broken up into three parts and released as a trilogy, it was so huge.

And unfortunately, therein lies the largest flaw of The Longest Journey; there's just too darn much of it. You have to admire all the work that went into creating this masterpiece (and that it is), but unfortunately Funcom may have bit off slightly more than they could chew. Right around Chapter 8, the game runs into serious pacing problems and becomes an exercise in patience, especially for a gamer not generally able to devote more than one or two hours to gaming a day. I myself nearly lost interest in the game completely during the insomnia-curing Alatien tales sequence. Long games walk a fine line, and even though most modern RPGs are pushing 40+ hours of gameplay, how many of them actually stay moderately interesting for that whole time? Very, very few. The Longest Journey would have been a much better game if it had been trimmed by about three hours (which is not to say an adventure this length could not be perfect with better pacing). 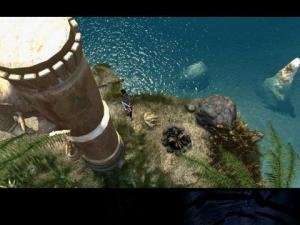 Still, The Longest Journey is a brilliant game, and I had a terribly difficult time rating it in the countdown because its place in history has not yet been determined. How will it hold up over time? It's impossible to know. Was it really the catalyst in an adventure renaissance that we appear to be on the brink of? That also remains to be seen. It certainly would rank no higher than #7 in any case due to the pacing problems, but since a game's place in history is an important part of these rankings I may have undershot it a bit. I freely admit this ranking is open to criticism. Until history proves me wrong, however, it's not an insult to say that this game is a breathtaking experience, and the #11 adventure game of all-time.

Last time: At the time of the last countdown, The Longest Journey hadn't even been translated into English yet. If only we knew...

michaeln
I don't know... The dialog was weak and tedious to read and endure. It was like watching a bad movie with the only redeeming quality that it was interactive. The best adventure games have crisp writing that keeps you engaged rather than mundane dialog that makes you want to shut it off.

Garakz
This game is just so damn awesome, and the best part: It's in even better in Norwegian. If you are Norwegian or understand the language DO play it in Norwegian. It adds so much to the gameplay just hearing what it's supposed to be heard like,
Advertisement
feature