"Casually glancing at the status line, you happen to notice you're in Space Quest XII." 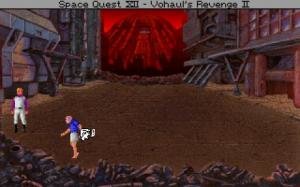 But sometimes I just want an adventure game to make me laugh, and with the possible exception of Monkey Island no gaming series has consistently produced laughter like Mark Crowe and Scott Murphy's Space Quest franchise. The series was six games strong, but died too young—or did it? Rumors of an official Space Quest 7 persist, proving some gaming heroes just don't know when their time is supposed to be up. A series as enduring as this undoubtedly deserves a place in the Top 20 list. Selecting which game was the tough part. Although many of the SQ games could make a case for being here, the reason that the CD-ROM version of Space Quest IV: Roger Wilco and the Time Rippers gets the nod can easily be stated in two words: Gary Owens.

When it was first released in 1990, Space Quest IV was a complete graphical revolution, the first Sierra game to feature VGA graphics. The introductory visuals of Roger in the Prometheus space bar were absolutely gorgeous. Two years later, the CD version of Space Quest IV came at a time when CD-ROM "talkie" versions of games were very new, and designers were still discovering what the format allowed them to do. One of the first things included in CD games, naturally, was full vocal narration and real voices for the characters. Sierra brilliantly tapped Laugh-In's Gary Owens for the job.

Ten years later, I stand here and say with a clear conscience that there has never been a better or more well-cast narrator in a computer game. Gary's sarcastic, mocking, over-the-top tone was just brilliant. Gary made even stock responses sound condescendingly funny. I found myself clicking every icon in every possible place just to hear everything he could possibly say. Gary Owens simply was a genius, and his genius brought added life to the game. 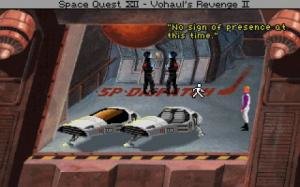 The game itself was pretty darn good too, featuring the most original plot of any of the six Space Quest games (I'm a sucker for time travel), and an ending that actually choked me up a little bit. The puzzles found a better balance of difficulty than any other game in the series (although a cruel mid-game Sequel Police escape necessitated a lot of Sierra hint-line calls). SQ4 also introduced the hilarious Smell and Taste icons, which served no useful function in the game other than provide Owens with many more hilarious things to say.

Many of the Space Quest games seem a bit anticlimactic; most of the time this is by design, these are sci-fi parodies after all. SQ4 maintained a healthy sense of intrigue and drama throughout, building up to the climax and an appropriately emotional payoff without losing the focus of humor. It's the most heartwarming Space Quest game at the same time as it is the funniest. 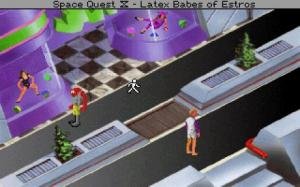 In the interest of full disclosure, this is the only game from the Top 20 that I was not able to play through before the rankings. The reason is that, even on the slowest computer I had access to, even with every conceivable slowdown program running at max, the game could not run slow enough to allow me to get past the first 10% of the game. My ranking of this game is based solely on memory and nostalgia, and while I don't think that invalidates the selection, I wanted to be sure and state that clearly for the record.

Memories (at least ones not related to my ex-girlfriend) don't lie, though: Space Quest IV is the most brilliant game in one of the most storied adventure series ever, and that combined with the immortal narration of Gary Owens makes it the #13 adventure game of all-time.

Last time: Reader feedback lashed out at the ranking of Space Quest IV as #10 on the last countdown, but I really feel this was more a function of the general anti-Sierra bias then the actual quality of the game. It was very difficult to rank it this time without having played it again, so I simply dropped it behind a game that I felt was better. You can agree or disagree with that tomorrow. 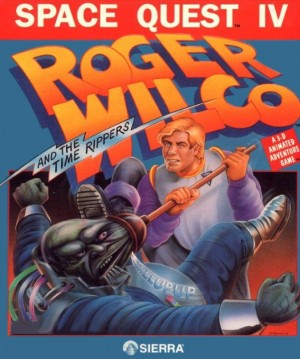