I discussed in the introduction to the Top 20 that the historical importance of a game can be a very important factor in its rankings, even despite some serious shortcomings to the game, and here is our first major example. The legendary Maniac Mansion makes its home on this list not because of its technical merit or because of how enjoyable it was as a game; rather I choose to honor it because Maniac Mansion introduced what is arguably the most important component of great adventure games ever: the SCUMM system. 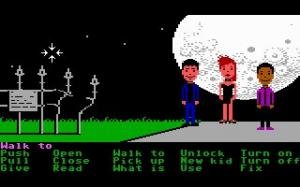 The SCUMM interface, from the minds of Ron Gilbert and Dave Winnick, was the medium used to bring us an incredible assortment of classic adventure games, two of which we've already covered in this countdown, and quite a few more of which will be revisited as we near the summit. SCUMM actually stands for Script Creation Utility for Maniac Mansion, and it is widely revered as the greatest adventure game system that has ever been created. Here is the game that started it all; the first adventure from arguably the greatest adventure game producer ever.

In 1988, Sierra was still putting the finishing touches on its brand-new SCI system, and King's Quest IV as the roll-out game. But even with that release, all point & click meant to Sierra gamers was awkwardly using the mouse to control where your character would walk, and Sierra wouldn't really get that whole mouse thing down for another couple of years—but that's a topic for another day. LucasArts (known as Lucasfilm Games back then), with their first adventure (which was released before KQ4), completely eliminated the keyboard from the equation and thus increased ease of play exponentially. No longer was there a need to type "use hamster in microwave" when you could click on the verbs and objects to form your sentences. It was simply a revolution, one of the most important ever in adventures. It would be one of the great ironies when LucasArts would be responsible for bringing the keyboard back into the equation years later, but that is also the subject for another day.

On its own merits, while maybe not being brilliant and rapturing, Maniac Mansion is still enjoyable and well-designed, especially for a company making its first effort. I spoke yesterday about the high replayability of Pandora Directive; here is the only adventure game that can compare. The player has a choice of any two out of six characters to accompany our hero Dave into Dr. Fred's mansion of terror. They all have very different skills. Bernard is the techie who can fix the radio. Wendy is the writer who can edit the memoirs. Michael is the photographer who can develop pictures. Although there are really only five main paths through the game (still a fairly remarkable amount), there are 15 different combinations of teams, and each possible combination of characters will force you to get around the various puzzles in at least slightly different ways. Some combinations made winning easier than others (my personal favorite is Michael and Wendy) but winning was possible with each combination. 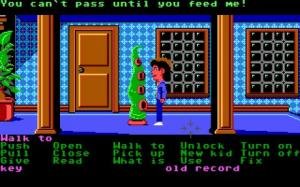 Maniac Mansion made great use of cut-scenes, teamwork, and real-time action. You had to know where all three of your characters were at all times and make sure none of them got caught when a member of the family was moving through the house. If one of your members did get caught and you had to spring them from the dungeon early in the game, it required having a second member join them in the dungeon to spring the trap door. It was frustrating and tedious to many, and certainly one of the most difficult LucasArts adventures ever, but the complexity and offbeat nature of everything won many over, including me.

The SCUMM system still had some growing to do. Of particular negative note was the fact that passing the cursor over an object would not tell you whether it was selectable unless you first selected the What Is verb, truly one of the more moronic design ideas. It would take a few years for SCUMM to finally take off (yet again, a topic for another day), but without a foundation nothing can ever be built. Maniac Mansion was a revolutionary game both in the way it operated and the interface that it introduced, and it's hard to imagine how the adventure genre would have progressed without the SCUMM system and the game that bears its name, which is why I honor Maniac Mansion as the #14 adventure game of all-time.

Last time: The last list had a much stronger bent towards the historical importance factor, which resulted in the ranking of Maniac Mansion at #8. The response was equal parts demanding it lower or removed from the countdown, and equal parts calling it far too important and classic to be as low as #8. Three years later, this is where I feel it fairly belongs based on its merits as an actual adventure game. Polls and e-mails will tell me what you think!