"Between the monsters and the brigands, we could certainly use a Hero around here." 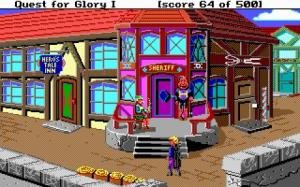 In 1989, Sierra had already established King's Quest, Space Quest, and Leisure Suit Larry as successful series, and were preparing the second tale of Sonny Bonds. Underneath the radar came a game called Hero's Quest that was nothing more than an experiment in genre-blending: "What if we took our standard adventure game, and combined it with RPG elements?"

The result (after Sierra changed the name to Quest for Glory as a result of a Milton-Bradley copyright) was wildly successful, and resulted in the prestigious Adventure Game of the Year award from Computer Gaming World, as well as spawning four sequels, two full-scale amateur sequel projects, and a legion of die-hard fans that are very active to this day.

Genre-blending is something we just accept as fact today, with the proliferation of such "adventures" as Tomb Raider and System Shock, but it was much more of an experiment in 1989, and if it failed, at least they could say they tried. Fate intervened, however, and word spread quickly about this fascinating combination of a pure adventure, pure RPG, and pure comedy.

We have yet to see an adventure hybrid that has avoided completely losing its adventure humanity; somehow, Sierra avoided this curse with every entry in the Quest for Glory series. Although you must develop the statistics of your character as you go through the game, and there are numerous battles with the various monsters of the land, never does the hardcore adventurer feel like they've been shoved into a genre they'd rather not be in. This balance is incredible, to this day. 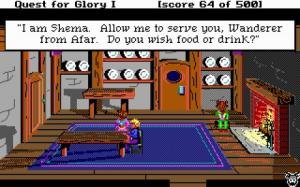 The plot involves your aspiring Hero, recently graduated from the Famous Adventurers' Correspondence School, answering an ad for a Hero needed in the land of Spielburg. Eventually you will confront a kobold, an ogre, and the evil ogress Baba Yaga. But the adventure does not end when you finish restoring order in Spielburg; instead you are wisked off to another land in preparation for the next adventure—and you get to take your character with you. That's one of the major elements that made this series so much fun: the personal connection to the Hero that you had spent time creating. If you had spent time in QFG2 developing your Throwing skill, it would pay off in QFG3, and vice versa if you had ignored it.

And of course, the QFG humor is legendary. You'd never know it on the surface, but there are almost as many jokes in this game as in a typical SQ or LSL game; the difference is that Al Lowe and the Two Guys preferred a beat-you-over-the-head style of humor (which, don't get me wrong, I'm not criticizing), whereas the brilliant Corey Cole preferred a darker, more deviously subtle method of making you laugh. The result was a distinct dark comedy style that has never been duplicated in an adventure franchise. 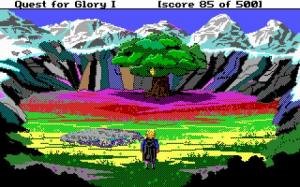 It's hard to rank the Quest for Glory games. I love all five of them, with QFG3 maybe being a notch below the rest in my book. There was no question the series deserved to be represented on the countdown; the only issue was which one to choose. Since this was really the bold experiment, the one that gave birth to the adventure-RPG blend that no other designer was ever able to perfect like this, Quest for Glory I represents its series proudly as the #16 adventure game of all-time.

It's worth noting that the game was redone in VGA in 1992 with gorgeous claymation graphics, but the substance of the game was 100% the same.

Last time: I chose QFG4 instead to represent the series last time, also at #16. After receiving a lot of input from a couple close friends who are QFG fans, playing both games, and realizing how close they really are, I gave the nod to the one with more historical importance.

All Quest for Glory games (series/episodes)
» Discover other games