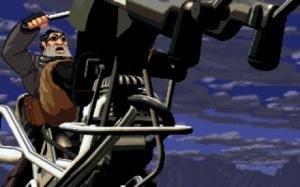 The opening scene is positively riveting. A high overhead shot of a highway, as a gravelly brooding voice sets the stage. Before long, we're introduced to our anti-hero, Ben, tough-guy leader of the motorcycle gang Polecats in a post-apocalyptic future. We meet Malcolm Corley, head of the only company still designing the bikes Ben rides, and his devious assistant Adrian Ripburger. We learn of the evil plan Ripburger has to take over Corley Motors, and how Ben's gang becomes mixed up in it.

Then our hero ends up unconscious in a dumpster—and the game hasn't even begun yet!

And so the stage is set for one of the most brilliantly cinematic adventure games ever created. Although the genre was definitely on the downhill slide in mid-1995, LucasArts threw all of their creative energy into Full Throttle, which spent a fair amount of time on the PC Data Top Ten sales list (the last pure third-person adventure ever to do so), and created an endearing anti-hero, tough as nails and seemingly devoid of feelings. 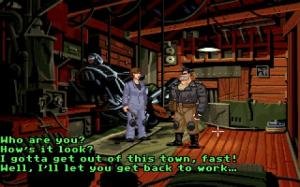 The movie-like intensity of Full Throttle is unflinching; at no point does this game ever feel stalled or plodding. The characters all feel disarmingly real, especially Maureen, the female lead.

Graphically, the game was a major triumph, with incredible cut-scene animation increasing the cinematic feel. The soundtrack, with original music by biker-rockers The Gone Jackals, could not have been more perfect. The voice acting, specifically Roy Conrad as Ben, is top-notch. And it is all topped off by an emotional and perfectly appropriate ending that completes the experience. Sounds like a Top Five game to me, right?

Unfortunately, one massive weakness holds Full Throttle down: it is the most notoriously short adventure game in recent memory. Besides just being a very short game, the puzzles were also relatively simple. Maybe that makes this a good game for adventure beginners (which it certainly is), but somehow with all the emotional intensity and characterization, the gamer feels short-changed in the end that the experience ends so quickly. Most average gamers could finish the game in under eight hours the first time they played it, which somehow leaves a sour taste. 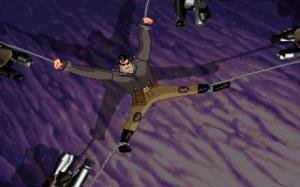 Despite that awful flaw, and the slightly unsuccessful integration of action scenes midway through the game, Full Throttle is still a must-play for all adventure gaming fans, and worthy of being the #20 adventure game of all-time.

Last time: I left this game off of the last countdown, choosing to give the shortness flaw more weight than the triumphs. Playing it again recently made me realize how few games have equaled its level of cinematic quality, so I made room for it.

michaeln
I'm torn whether or not this should be on the list as it's too short. I can tolerate the puzzle simplicity, but I remember that when it ended, I didn't believe it. I was waiting for some scene where I thought I had won, but actually didn't. The amount of game and story that's there is indeed brilliant, but it's just an amuse bouche and not an entree.
Advertisement
feature