Created in 1988 by cartoonist Everett Peck for Dark Horse Comics, Duckman is an anthropomorphic duck-like private detective with glasses for eyes, large teeth, and unusual red bangs drooping over his forehead. He went on to star in his own cable TV series, Duckman: Private Dick/Family Man, which ran for 70 episodes on the USA Network between 1994 and 1997. But despite his origins and his comic book-style name, Duckman is neither a hero nor particularly super, rarely solving a single case except by accident. Instead he spends the majority of his time fighting with his sister-in-law, propositioning women, torturing Fluffy and Uranus, the cute little teddy bears who temp at his office, and screaming at the top of his lungs.

The Duckman game treats the cartoon series as if it were a scripted reality show, with Duckman and his family as the stars. We open on Duckman lounging in a Jacuzzi at the Abs N’Ass health spa, where he's been living for a month, playing hooky from his contractual obligations. Then one day he turns on the tube and is shocked to see he's been replaced on his TV show by New Duckman, a buff superhero who's as competent and handsome as Duckman is inadequate and scrawny. Once the spa finds out he's not a TV star anymore, they toss him out on his beak, leading Duckman to storm Paramount Studios to get to the bottom of things. Finding no luck there, he seeks solace in the arms of his loved ones, only to find they prefer New Duckman, and are building an electric fence around the house to keep Old Duckman out. Now he's got to pull himself together long enough to investigate this turn of events and win back his show and the love (or at least tolerance) of his children.

Duckman is very similar to the LucasArts adventure games of the early to mid-90s, and strongly resembles Sam & Max Hit the Road in many ways, from the design of each area to the map with large location icons you use to travel from place to place. You can say anything to anyone, and attempt to pick up or use any object without fear, because you can't truly fail or get stuck, which is good because there are only ten save slots. There are three fairly easy timed sequences near the end where it's possible to die before you solve the puzzle, but if/when you do the game will stop to say how that would have been a tragedy, but luckily for you this "isn't that kind of game," and will automatically place you back at the beginning of the sequence. About those saves, I'd advise you to leave the room you're in if you plan on quitting, because for some reason the game loads at the moment you originally entered the scene, and will ignore anything you've done after that (like that long conversation, or when you finally figured out where to put that item). 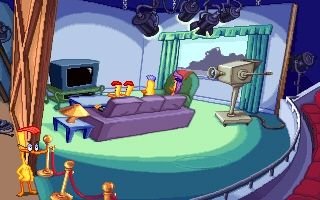 The interface uses the mouse exclusively, with only two ways to interact with the world: rationally or irrationally. Either a calm, inquisitive Duckman face or an angry look-out-he's-gonna-blow Duckman face. A brilliant idea but not utilized to its fullest, as often the normal face will lead to trouble and the angry face will barely provoke a reaction. Duckman can carry almost anything in his inventory, and even objects twice his size slide easily into his… body? Feathers? Hammerspace?… and can be retrieved by clicking on Duckman himself. Keyboard shortcuts to access his inventory would've come in handy, but if there are any, I couldn't find them. The dialogue trees are another area where the game doesn't quite live up to its glimpsed interactive potential. Your conversation options consist not of words or phrases but of pictures, each one merely suggesting what you'll talk about. For example, a green card means you'll threaten to turn someone in to immigration, while a picture of the person you're talking to with lipstick on means you'll accuse them of being a crossdresser. Great stuff, but there are maybe a half-dozen in the entire game, with the majority of dialogue handled automatically.

The puzzles are primarily inventory-based, working on that sort of cartoon logic that fuels so many adventures. The first third of the game contains virtually no puzzles at all, and works on a rhythm of cutscene, interact with a couple objects/people, cutscene, repeat. It's not until Duckman learns he has to nail two auditions in order to regain access to the Paramount lot that the game part of this adventure finally comes in to play. If you're experienced with comic adventures, the puzzles shouldn't give you too much trouble. If all else fails, the old use-every-item-on-every-hotspot approach will eventually yield results (though the burp and fart sound effects when you go in and out of your inventory screen may grate on you after a while). Finding hotspots can be frustrating, as the only way to identify a clickable object is when the Duckman cursor changes expression, and given his head is so large, often he won't change expression if two hotspots are close together. And since sometimes a large object will be a hotspot in and of itself, but also contain smaller hotspots that can barely be differentiated, this will lead to a few teeth-grinding pixel hunts before all's said and done.

All the main characters from the cartoon are here: Duckman's partner Cornfed, an oddly capable pig who sounds like Joe Friday and is usually the only one who knows what's going on; Bernice, his late wife's twin sister who does nothing but work out and yell at Duckman; Duckman's kids, Ajax, a dim-witted surfer dude, and Charles and Mambo, Siamese twin heads sharing a single body; and "King" Chicken, his arch-nemesis and the source of countless schemes to get revenge on Duckman for being a jerk when they were kids. Added to these are several new characters, most of which aren't important enough to even get names, with the notable exceptions of Hung Lo, the Chinese plumber, and New Duckman, the musclebound superhero with a secret. 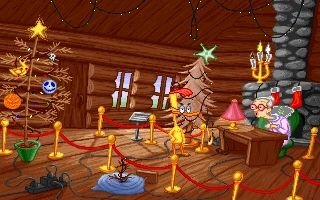 The back of the box will tell you the game is okay for ages 11 and up, but if you're a parent of a 12-year-old, you'll probably disagree. While there's no actual nudity or major swearing in the game, virtually every word out of Duckman's mouth refers to sex or violence or both. An innocent glimpse at the stars leads to: "Space. The final frontier. Of course the first frontier was Mary Beth Wadfodder. Everyone journeyed through her mysterious depths." Supposing every object in the game has 1 to 4 things Duckman will say about it (if you use both of his expressions and click multiple times), and 95% of his comments include some kind of joke, it's not possible for you avoid laughing at least a few times during this game, regardless of your sense of humor. A further note of warning: Duckman is firmly based in the mid-90s and proud of it. If you don't know who Carol Alt or Paul Sorvino are, you may not get a lot of the references.

The voice acting is an area where Duckman really shines, and even if you usually read ahead on the subtitles and skip through the voices, you'll probably want to linger here. All the actors from the show returned to voice their parts with one notable exception: Duckman himself, Jason Alexander, is replaced by voice actor Michael Gough. Gough does an admirable Alexander impression, but there's never any doubt as to who you're listening to. Couple the great voices with the dead-on art style, and you really feel like you’re living in the Duckman world. The only place where the graphics seem off is in the blasé pose Duckman strikes whenever he's not actively doing something. This may be his worldview, but it seems out of place when he's just gotten through raging at something or is in a timed sequence where everyone's about to die. 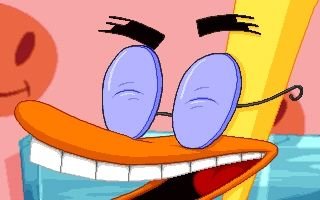 I didn't have any major problems running this game on my Windows XP desktop PC, but your mileage may vary. It started right up without using any compatibility features or emulators, though initially the placement of the screen caused over a third of the right side to be cut-off. Even after adjusting the monitor settings as far to the left as I could, I still lost maybe 5% of the screen, which made one particular pixel hunt very difficult. I never got the background music going, but I played some of the MIDI files in the source directory and don't think I missed out on too much. On the other hand, the game wouldn't start at all on my Windows Vista laptop, though the error message claimed my video card was not capable of displaying it, so it may work on more robust Vista systems. Another minor irritation, though you can't blame Microsoft for this one, was the inability of the game to time up the subtitles with the dialogue. No matter how much I fiddled with the Text Duration slider, it would remove the subtitles too early or leave them up way too long.

If you load the game up after lunch, you may be shutting it down before dinner. Duckman will run you 4 to 6 hours at most, and that's if you click on every object and attempt all the wrong ways to solve a puzzle before finding the solution. But in that brief time, you'll get hit by a train, learn the Chinese art of insults, slap a security guard with his own hat, put two cuddly teddy bears in a blender, and many crazier things I don't want to spoil. Yet, amidst all the mayhem caused by Duckman's uncontrollable, unrepentant male id, in the end he manages to find the faintest hint of redemption and bring everything together to a satisfactory close. Despite its flaws and shortcomings, if you're a fan of the old LucasArts adventures and/or tidal waves of double entendres, you should have a short but fun, nostalgia-filled afternoon with Duckman.

A fun way to spend an afternoon for fans of the classic '90s cartoon-style adventures, but modern gamers may be underwhelmed.

GAME INFO Duckman is an adventure game by Illusions Game Company released in 1997 for PC. It has a Comic cartoon style and is played in a Third-Person perspective.

What our readers think of Duckman