What Linus Bruckman Sees When His Eyes Are Closed review

We get a small commission from any books sold.
All Bitmap Books
Written by
Gunnar Harboe — July 11, 2007

One of the big headaches of game design is "how can you tell a great story that is also fun to play?" Now, Underground game designer Vince Twelve has found a new way to relieve the tension between storytelling and gameplay, by making a game that is about telling a story. In doing so, he has created what is arguably the most innovative adventure game of recent years.

There just aren't any good jobs in space. As a sexy little electric-blue alien and heir to one of the largest fortunes in the galaxy, you should be living the sweet life, but an unfortunate poker habit has forced you into the role of a glorified fry cook. In this hilarious futuristic fast-food epic by the creator of Anna, you must learn how to serve man... and also robot, alien, and everything in between.

Those might be the opening paragraphs of reviews for "Kami" and "DocMcVonSpaceburger Jr.", the two-games-in-one that make up What Linus Bruckman Sees When His Eyes Are Closed. Now try reading both of them at the same time, and you might get some idea what playing the game is like. Yes, in a unique twist, Linus is a split-screen adventure where you play two games at once. 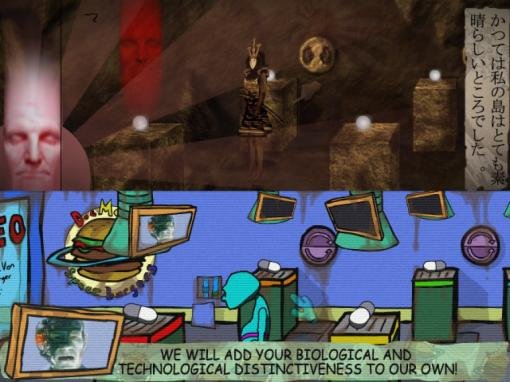 A little more explanation may be in order. In Linus, the screen is divided into top and bottom halves, one for each game. You have one mouse cursor in each half, and they track each other, moving and clicking together. The two game environments have similar layouts, so that usually when you perform an action in one game, something happens in the other game too -- but potentially something different. In order to win and discover how the two stories are connected, you have to complete both games at the same time.

If it all sounds too clever by half, be assured that Vince Twelve has taken the split-screen gimmick and built a solid, rewarding game around it. Indeed, while the whole is greater than the sum of the parts, those parts could proudly stand on their own without the unifying conceit. "Jr." is a very funny game about an alien who prances around a fast-food restaurant in a speedo, while "Kami" is a serious drama based on Japanese mythology. Stylistically the games are completely different, which is the whole point.

The difference in style is reflected in the graphics. The upper half of the screen has a realistic photo-collage and Photoshop-filter look, in murky and muted colors. The lower half is done as bright cartoon cut-outs. Both are attractive to look at, in a no-budget kind of way, and all the menus, intros, end sequences and credits also exhibit impeccable visual design. The single-click interface is simple and intuitive, but a Flash-based manual is provided if you should be confused.

The music is composed by Nikolas Sideris, and as befits the game, consists of two separate songs playing in sync. Somehow the two melodies create harmony rather than cacophony, and the end result is pleasing as well as impressive. The goofy "Jr." tune started getting on my nerves after a while, but I found that I was able to ignore it and focus on the more soothing "Kami" theme. However, if you can't stand it, you can adjust the mix however you prefer. There is no voice acting, but then again even Robert Altman would have been stumped by this amount of overlapping dialogue.

And then we have the gameplay. The following may unfortunately turn some players off at once, but there's no way around the fact: Linus revolves around one big slider puzzle. Or, as a matter of fact, two big slider puzzles, made more difficult by the inconvenient detail that working on one inevitably interferes with the other. Some players love slider puzzles while others despise them, so this is a design decision that may split the audience. The puzzle is not particularly difficult if you know the strategy, but it is time-consuming and occasionally frustrating, especially if you are trying to solve both puzzles at once.

Before you can start arranging the pieces, however, you need to figure out where they are supposed to go. This involves solving a number of problems that probably have to be worked out on paper, such as matching ingredients with food orders. While these puzzles may be the most difficult parts of the game (there are in-game hints, but they are easy to miss), I also found them the most enjoyable ones. Compared to many other third-person adventure games, Linus is fairly hard, but it is a game that requires systematic reasoning more than lateral thinking.

That the game uses the same slider puzzle presented in two different ways tends to emphasize the underlying puzzle structure and make the settings seem like incidental decoration. In consequence, Linus sometimes appears in danger of tipping over into pure puzzle territory. Fortunately there are enough quirks breaking up the sterility, such as a slider switch that doesn't work and a few red herrings in the hints, to keep things interesting and ensure that the game remains grounded in the adventure genre. 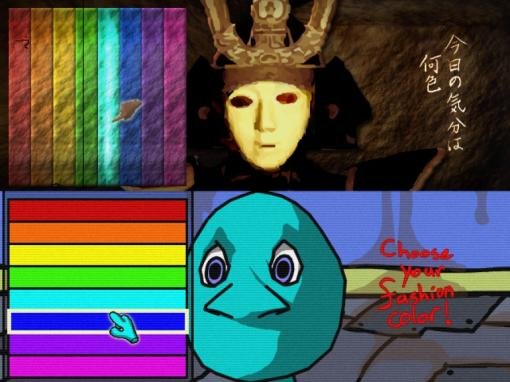 Those quirks are among the many ingenious design details that turn Linus from an interesting experiment into a genuinely great game. The most important of these details is the decision to make "Kami" in Japanese. Players who cannot read Japanese (presumably the bulk of the audience) have to complete the other half of the game first in order to unlock English subtitles. This is an effective solution to the potential confusion of two simultaneous games, as players can focus first on the lower half of the screen, and then on the upper half the second time they play. Arranging the games in this order benefits the story, too, as there is a shift towards a darker tone that leads into the overall ending. And finally, the top-down Japanese writing against the left-to-right English text echoes the horizontal-vertical layout variation that allows players to control some aspects of the two games independently. The result is a remarkable example of the elegance of design found throughout the game.

Although it must be completed at least twice before the real ending can be seen, Linus is still a relatively short game (and a small one, each half set in a single room). It took me somewhat less than four hours to finish both parts, even screwing up several of the puzzles, but expect playing times to vary widely.

Linus won the 2006 AGS Awards for Innovation and Scripting, and they are well deserved. The game is a tour de force of programming, and not just a milestone in Underground creativity, but one of the most original adventure games ever made. In fact, I'm struggling to find anything negative to say about the game. Well, the ending is perhaps excessively dark, leaving players on a downer, and who thought What Linus Bruckman Sees When His Eyes Are Closed was a good title? These are trivial objections, however. The puzzles may not be every player's cup of tea, but that is no excuse not to check this game out. With a cleverly written story and dialogue, finely tuned gameplay, and an abundance of fresh ideas, Linus is a must-try game for all adventure lovers.

You can download What Linus Bruckman Sees When His Eyes Are Closed from Vince Twelve's website. The site also has a three-part article series on the creation of the game.