It is great, finally, to be writing an Underground review where I don't need to use the word "eponymous". Instead of featuring the name of the protagonist in the title, Reactor 09 is named after one of the power plants that Clyde, our hero, designed before he became a guest of the government and its Correctional Officers.

But is Clyde really a hero? For it seems that he's in the clink for murder, and Correctional Officer Matthew Holmstett does not trust him at all. Perhaps the C.O. is correct? During the course of the game, you have choices to make that may not stop you from completing the game, whichever way you choose, but do affect the trust that Matthew has in you. Eventually, they will even influence the ending if you can find any evidence against your homicide conviction... if such a thing even exists.

Reactor 09 begins with your floor-cleaning duties interrupted by an apparent earthquake that rocks the facility. As the plot progresses, it turns out that something is wrong with the power plants in the city, and one of the reactors has exploded, with another approaching critical state. Clyde knows how to shut the reactors down and endeavours to get to Reactor 09, the critical one, in time to prevent another devastating explosion. But first he'll need to persuade those he meets that letting a convicted murderer fiddle with a power plant's controls is a good idea. 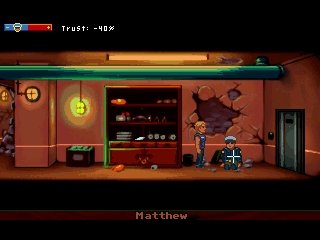 As with author Bernhard ("Bernie") Politsch's previous Cedric and the Revolution, the graphics are as excellent as they get in 320x200 resolution. There is great animation and attention to detail, and both the background and character graphics were nominated in their respective 2006 AGS award categories, and rightfully so, though the game was barely edged out in both.

The whole trust factor certainly is a welcome feature in the gameplay. If not unique for some players (yes, that means you, Japanese dating-sim players), it certainly is unusual in Underground adventures. As for other aspects of gameplay, the puzzles are generally pitched at the easy-to-medium level, with one notable exception, and there is a nice mix of inventory and dialogue solutions. Both actions and words influence the trust factor, too (which can intuitively be viewed at any point by hovering the cursor over the C.O.) It is plain as to which things you say will be received well, and which received badly, so if you want to gain trust, you can do so easily, and if you want to try other endings where the trust level is lower, then that too is not hard to achieve. There are a few extras in this game, and it is worth taking the time in each scene to fully explore. You can progress past some scenes without finding every hidden object, and although this doesn't lead to dead ends, it may restrict the number of possible endings you can achieve. You may want to keep a variety of saved games from different parts of the game in case you wish to go back and try out every ending.

Interaction is done through a verb coin interface in Reactor 09, which I know some dread, but it is done well and I had no problems using it. There's a readme file for those unfamiliar with the interface, but the intuitive way things work should not be a problem for anyone who has played this kind of adventure before.

The main plot development is well done, with flashbacks and newspaper clippings of past events (although why are they lying around the prison? The inventory fairy has been at work again), and as the relationship between the prisoner and his Correctional Officer develops, more of each of their stories comes out. The only weak part is when some characters mention briefly that they are worried for friends and relations hurt in the first reactor blast, yet then drop the subject completely and don't try to contact them with the nearby telephone, which is reserved for use only in another puzzle, it seems. 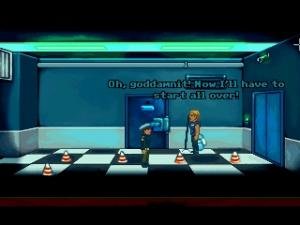 There are a few other problems with the game. The Star Trek-ish jargon about future technology is as ludicrous as "transparent aluminum" and I'd have thought that even (or especially?) in a prison, attitudes towards homosexuals would be a bit more enlightened in "the future". And there is one puzzle involving 3D co-ordinates that, despite extensive in-game instructions, really didn't make any sense to me and also involved "the end of a laser beam", which is pseudo-scientific nonsense. Perhaps the game is more enjoyable for those who don't get wound up about such things like this scientific pedant did. Even so, these things are minor blemishes, and one confusing puzzle does not a game ruin (thanks to Google).

Music has been provided by that anonymous old stalwart known as "The Internet". But while the tunes may not be original, I didn't recognize any of them, and they seem well chosen and used appropriately in the game. The dialogue writing was apparently a bit flaky in the early stages of the game's development, but Shane Stevens, of Mind's Eye fame, stepped in and helped Bernie out with that, and the end result is quite polished. The game has some mature language and animated blood, so it's recommended for adults, although to be honest, I think most kids these days will have seen worse on prime time television.

Overall, Reactor 09 is a good game, but not long or thought-provoking or innovative or anything quite enough to really blow me away. I think that's perhaps why it didn't win any AGS awards, despite being nominated for nine in total... it does almost everything well, but nothing spectacularly, and its few flaws are just enough to nudge it from being a great all-rounder. But it's definitely a solid endeavour, and its best feature is the trust factor and the four different endings it produces, so if you're looking for a short, fun (and of course, free) adventure, Reactor 09 is worth a diverting hour or so of your time.

Reactor 09 is just under 5 MB, and can be downloaded from the developer's website.

What our readers think of Reactor 09