We get a small commission from any books sold.
All Bitmap Books
Written by
Rob Michaud — April 27, 2007

I've always loved reading, and one of my happiest memories growing up is when I was introduced to a long lost great aunt that had been an English teacher in the late 1940s. She took a shine to me, and when we got in the car to leave, the trunk was full of the complete works of Robert Louis Stevenson. The rest of that summer I pored over the horrific story of Dr. Jekyll and Mr. Hyde, the adventurous Kidnapped, and my favorite of the novels, Treasure Island.

For those not familiar with the book, it is the story of Jim Hawkins, a young man hired by a former seafarer to keep a lookout for pirates, as he thinks that they are after him for his treasure. The mariner dies soon after and Jim finds a treasure map amongst his belongings. The adults (as they always seem to do) take over and decide to buy a ship and go after the treasure, taking Jim along as a cabin boy, as well as a mysterious cook by the name of Long John Silver. From there the reader is treated to one of the best adventure stories ever written, with the requisite swordfights, double crosses, and mutinies, and ending with Silver on the run with a portion of the treasure, Jim taking his portion back home, and the rest left behind on an island for later plundering.

Treasure Island is one of those rare books that is almost required reading for young boys, and I'm sure that I'm not the only one who spent plenty of late nights reading it by flashlight, holding my breath while I waited to see what was going to happen next, and then trying to re-enact it the next day with my wooden sword out on the front lawn with my friends. And apparently Kheops Studio feels the same way I do, because they have taken Stevenson's beloved characters and turned out a game that is not only a tribute to the original story, but stands on its own as a great tale. 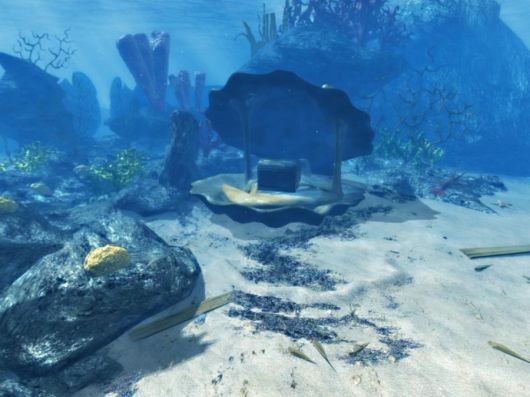 Destination: Treasure Island takes place four years after the end of the original story. Jim has grown up and assumed the role of a captain, when one night he is visited by Long John Silver's parrot, Captain Flint. Silver has retired to the majestic Emerald Isle, and Jim is informed that there is a great treasure buried there for the taking, if he can only solve the captain's riddles to find it. So Jim sets off on another treasure hunt, with a group of deadly pirates right behind him hoping to find the treasure (and Silver) themselves.

There have been lots of great adventure games over the years with horrible stories and great puzzles, just as there have been plenty of intriguing stories dragged down with the same old puzzles over and over again with different window dressing. But Kheops has managed to craft a great story that builds on the original while managing to keep you interested with a great series of twists along the way. It may start out as a simple treasure hunt, but as Jim gets deeper into his quest to solve Silver's riddles, he'll learn more about the island, and what exactly happened to Silver after he went on the run. And Kheops managed to do this while creating a great set of puzzles that fit in perfectly with the atmosphere, never pulling you out of the game in order to make you solve another sliding tile puzzle for no apparent reason.

When I saw the first screenshots of the game I was impressed, but I was a little worried, as we've seen plenty of node-based games over the years with pretty-but-static graphics. As it turns out, I had nothing to worry about. The graphics are gorgeous, and the different environments each manage to have their own unique feeling, with nothing feeling out of place or put into the game just for show value. And aside from the game graphics, you also have the cutscenes, which are all told in a charming comic format that pulls you in and leaves you wondering what our hero Jim is up against next. Anyone who has played Return to Mysterious Island or VOYAGE will be instantly familiar with this artistic style, and Kheops has once again used it to good effect here. 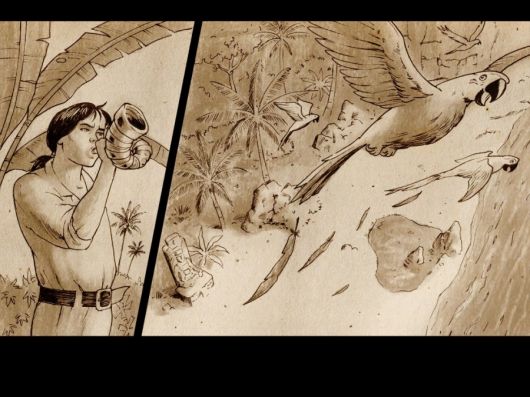 The game's music is an island-themed score that fits the setting perfectly, and is exactly what anyone who's seen a pirate movie at some point would expect. And while I can't really mention the characters in the game for fear of spoiling the story, rest assured that they are all excellently portrayed, with voices that match the personalities to a tee. Of course, all of this would be for nothing if the puzzles weren't up to par, and fortunately there's no letdown at all in the gameplay.

DTI is played in first-person mode with a standard node-to-node navigation scheme, with each screen containing hotspots and movement indicators to travel in each direction possible. One nice touch here is that rather than having to navigate through tons of screens in order to get back to a particular location, the game provides a handy map that will let you instantly travel to any section of the game that you have already visited.

Inventory is also handled similarly to RTMI and VOYAGE, with a tabbed interface that allows you to arrange your many items in any order that you like, along with a "holding" area for items that you have not arranged yet and any object that you are currently using to interact with the environment. There is also a nice assemble/disassemble slot so that you can build or take apart more complex items. This comes in very handy as, unlike many games, you will use many of the same items over and over in different combinations with other items in order to get past various puzzles. 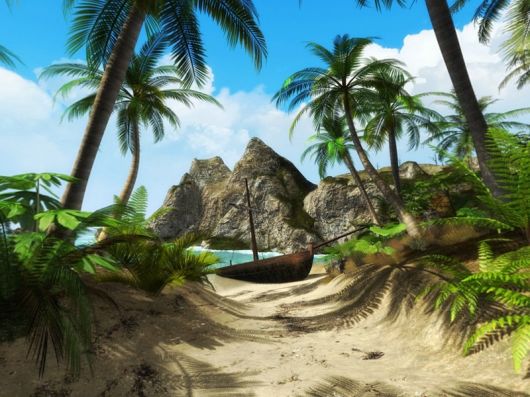 And what puzzles they are! At the very beginning of the game, Jim will have to search his cabin for the first set of items, and it is here that we are introduced to one of the most enjoyable puzzles that I have encountered in some time. Taking a cue from its pirate theme, at different times Jim will have to secure riggings, attach lines, and combine items. In many games, this would be handled by just combining the items, but in DTI, combining items with a rope leads to a puzzle in and of itself, as you are taken to a separate screen where you have to build different knots step-by-step in order to complete the combination. The first time this happened, I wondered if it would be just a one-time gimmick, but it is used very effectively throughout the game, as Jim works with different types of knots in order to get past certain areas.

This is just one example of the attention to detail that Kheops has paid to DTI in order to ensure that players are fully immersed in the game world. The majority of the puzzles are inventory-based, with Jim trying to figure out his way through the island and stay one step ahead of the pirates seeking Silver's treasure. Before the end of the game, you'll need to create primitive scuba gear, rebuild a cannon, and solve an ancient puzzle that will lead to the secret behind Emerald Isle's name, to name just a few of the challenges. And even though there are some stretches of the imagination required, there isn't anything so unbelievable that it pulled me out of the game. As far as the difficulty, I would put DTI squarely in the middle range, as it's definitely not a cakewalk, having some real headscratchers along the way and a few puzzles that are not as intuitive as they could have been, but nothing that's going to keep an experienced player from working their way through the game in around six hours or so. 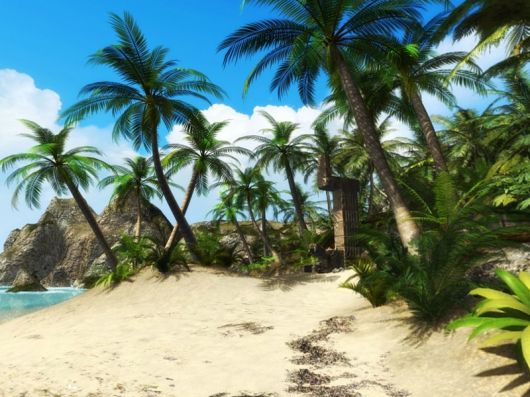 Unfortunately, just finding the game may prove to be the biggest treasure hunt of all. An international version of DTI (with a full English localization included) has been released in various areas of Europe with very little fanfare, but there is still no word of a widespread English-market release, either in the UK or in North America, and it'd be a shame for a game this good not to get the recognition and distribution it deserves.

For those interested in the game, then, you'll have to do some hunting to find it, but it's worth the effort, as Destination: Treasure Island is one of the more enjoyable games that I have had the pleasure of playing over the past few years. The game is certainly a little on the short side, which is really unfortunate as it's one of those games that makes you keep wanting just a little more -- the sort of game that knowing you're nearing the end of makes you a little sad that it's almost over. Hopefully it'll still find a more widescale English release, but if not, it's still worth the search to hunt down the game, as anyone even remotely interested in adventure games or Treasure Island owes it to themselves to play it.

While it's a little short, Destination: Treasure Island is a game that anyone who loves a little adventure in their lives should have in their collection.

GAME INFO Destination: Treasure Island is an adventure game by Kheops Studio released in 20072007 for iPad, iPhone/iPod Touch, Mac and PC. It has a Illustrated realism style and is played in a First-Person perspective. You can download Destination: Treasure Island from: We get a small commission from any game you buy through these links.
The Good:
The Bad:
The Good:
The Bad:

What our readers think of Destination: Treasure Island