We get a small commission from any books sold.
All Bitmap Books
Written by
Heidi Fournier — April 21, 2007

I dig first-person adventure games. In fact, I am a Myst lover. There is no use denying it, though I know lots of people aren't. Yet even though I enjoy these games, and the better ones have many great aspects to appreciate, sometimes the Myst-iness of them gets to be too overpowering. Too much of even a good thing can become tired rather than interesting, after all, and anyone who has played Myst and some of its clones knows they have a freaky sameness that just can't be escaped. The premise, environments, gameplay, and even the journal reading are just so similar.

The Sacred Rings is one of these games that can be fairly called a Myst clone. This sequel to Aura: Fate of the Ages is an obvious descendant of Myst, and it could not have existed without that seminal game. It is also a fairly good game in its own right. Unfortunately, it just isn't offering anything remotely new or original. Compared to the slew of indie games I have played lately, it is positively brimming with little extras like special effects, a ton of puzzles, long play time, plenty of character interaction, and a varied soundtrack, all of which make for good gameplay. Sadly, it is also lacking an intangible sort of joy that these games seem to have captured. It delivers diligently like a student checking off assignments, but is missing a spark in the overall results. It's like the designers had a blueprint that they followed with a stern dedication that stamped out any vivacious spirit.

Let's start with the story. Umang, the protagonist from the first game in this series, is once again our hero. This time he needs to help the clan called "the Keepers" vanquish their foes, enemies they unwittingly let into their dimension in the first place. These usurpers quickly took power, but still seek to control and understand the Keepers' technology. Specifically, they want to be able to travel between worlds like the Keepers once did. This means unlocking the secrets of the portal system the Keepers used to do so (which look very similar to those found in the TV show Stargate). Already the clichés have become evident in the premise: ancient artefact goes missing, bad guys want it, you need to find it and destroy it before it falls into the wrong hands. It closely mirrors the stories in other titles The Adventure Company has put out, from The Messenger to the The Crystal Key. 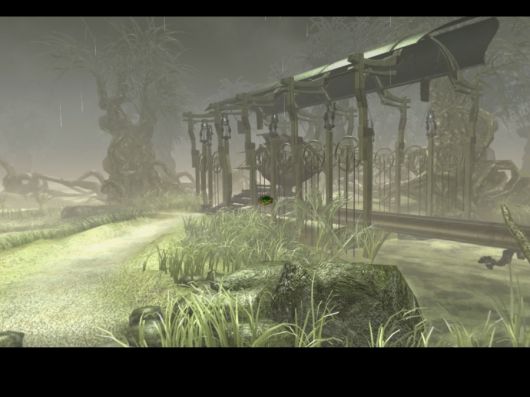 For those who have not played Aura, there is a fairly substantial introduction sequence which explains what happened in the original game. Thus brought up to speed, players then begin to navigate their way through the many environments in this first-person adventure. However, there are also plenty of third-person cutscenes and video that firmly flesh out the story and allow players to identify with their otherwise unseen protagonist.

The point-and-click interface is instantly familiar, but could have been handled better. There is a certain clunkiness when moving from node to node, as the transitions should be faster and there were times when it seemed like I was waiting too long to move to the next spot. The navigation could also have been streamlined. There are many occasions when you can't click in the direction you want to go; rather you need to go slightly around it, which can make backtracking laborious. And there is a lot of territory to cover in the game. In fact, at times it is hard to keep all the locations straight. Despite the sluggishness, however, the interface does offer a number of handy features. It automatically saves all the new videos from the game and inserts various writings, charts, and drawings you discover into a handy journal. Both of these features are easily accessible at any time.

As anyone who played the first game would expect, The Sacred Rings also has tons of riddles and puzzles. Some require trial and error, though they're the kind that don't have hundreds of computations to go through to figure out. Another group are of the push-or-pull-a-lever variety. Still others use some sort of colour code scheme or symbol matching system, while a smattering make use of sound to solve, so consider yourself forewarned if you have any visual or hearing impairments. Some of these puzzles aren't that hard to solve once you figure out the clues, but there are times when the game doesn't really give you a lot to go on, which might cause a little frustration as you try to work through them. Many are tied together by the various inventory items you will pick up throughout the game, and by and large they're generally linked to figuring out an even larger riddle in the game. This is something I appreciate. I know there are many out there that will love a puzzle any way they can get it, but I prefer to see a greater purpose to all that inventory gathering, mental gymnastics, and ability to identify patterns. 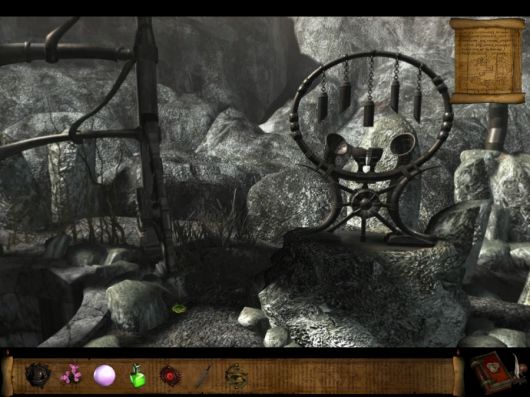 I do advise gamers to save often throughout the game. I know I say this with every game I review, but it is equally important here. There are a couple of puzzles that won't let you reset once you have begun. This is especially true before the maze. If you don't save before entering, you'll likely find yourself loading an earlier saved game when you're caught by guards. While you can't actually die, getting captured ends the game, so the result is the same. And since the baddies' lair is absolutely awash in guards, this happened to me many times -- so beware!

Like its predecessor, the graphic design in The Sacred Rings is strong, particularly when you consider that all the locations are all created and not pictures of real places. On each screen, you can pan the camera all around you, and there is a nice variety of worlds to explore. The various environments you'll encounter include a verdant forest that is also home to a cold, grey mine, a land full of cloudy skies and endless rain, and another covered in ice, complete with giant ice crystals. Some could have employed lighting a little better to bring out surfaces and textures, but by and large the terrain created by the development team is wonderfully detailed and imaginative. There are also a number of ambient effects in play throughout the game. In one scene the clouds casually roll by, while in another the rain falls peacefully, creating ripples in a pond.

Umang also interacts with plenty of characters, both dead (in spirit form) and alive. Most seem to have requests that need to be fulfilled, and in exchange they provide him with information or objects that he will need as he journeys through the game. None of these characters are particularly memorable, and the dialogue is pretty straightforward, with only passing attempts made at emotion or humour. Largely, it is there to deliver information to the player in the most efficient way possible. 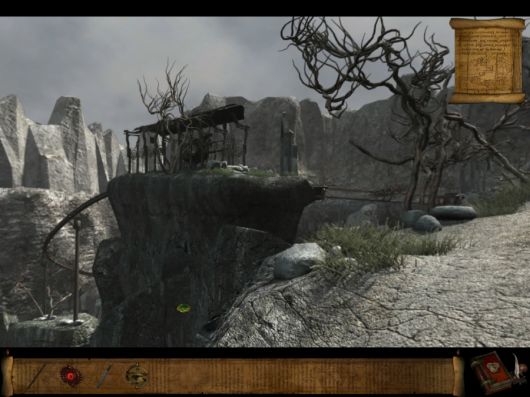 The orchestral soundtrack is suitably understated and sounds great. There are no looped tracks to grate, as most of the time a specific track will play only once in an environment. The musical score is also supported by a great deal of ambient sound that brings each world to life. I'd forgotten how much a nicely balanced blend of sounds can add to the experience after the repetitive musical constructs of the recent games I have played. I like the fact that a lot of the music only plays in its unique location and only for a set amount of time, as this gives the game a varied and engaging aural quality. The voice work is less impressive, but still solid, with no strange emoting or over-zealousness common to game acting.

The Sacred Rings is a long game with ample play time, though this is an especially subjective measurement with puzzle-intensive games. I spent close to 35 hours playing it, which is far longer than most games provide these days. At the end of all this, players are rewarded with multiple endings, so be sure to save before you make a key decision, then go back and watch how each one plays out.

With its polished presentation, a nice variety of environments to explore, and plenty of puzzles and puzzle variety scattered throughout the game, The Sacred Rings has a decent amount going for it. Unfortunately, the overall experience is limited by a story that falls flat and a distinct lack of original ideas. The plot is very similar to what you will find in a number of other games, and there is little to grab a gamer's attention and propel a desire to learn more. Even if you love puzzles and don't require further motivation, you'll likely still start to feel like you've played this game before in one form or another. As Myst clones go, then, there's enough here to recommend to the diehard fans, and it shouldn't disappoint those who liked the original Aura. Some new ideas, however, or at least a little creative inspiration, could have made this a great game rather than just a good one.

While The Sacred Rings has plenty of familiar gameplay to offer puzzle lovers, the absence of original ideas and creative spark means the game will have a limited appeal.

What our readers think of Aura 2: The Sacred Rings