We get a small commission from any books sold.
All Bitmap Books
Written by
Luke Jensen — April 12, 2007

I've always been a fan of all things medieval, from attending local Renaissance fairs to playing medieval-themed games. King's Quest, naturally, has a special place in my heart, and the series was essentially my introduction to the adventure genre. After playing KQ, I tackled many other games Sierra released, and one of my favorites was Goblins. When I saw that indie developer Buloght's Knightsquire had been likened to it, I jumped at the chance to play a game with similar gameplay, combined with the fantasy settings to which I've always been drawn. Even if you don't share my passion for medieval themes, however, the game has a few welcome twists that make it worthy of a place in the digital library of any Underground adventure fan.

As its name implies, the game's protagonists are an unnamed knight and his ever-obsequious squire. The king of the land has summoned the knight to embark on a quest to save his kidnapped daughter from the clutches of a man-eating ogre. With squire in tow, the knight must defeat the beast and rescue the fair damsel so he can ask for her hand in marriage. Sounds trite, doesn't it? It is. But that doesn't mean the game is boring. Thanks to clever puzzles and fun, quirky graphics, it's no surprise that Knightsquire won the AGS award for Best Short Game of 2006.

Given the category of the award it won, it should likewise come as no surprise that the game is quite brief. In fact, the action only spans three scrolling screens: two in the castle and one depicting the ogre's forest lair. The puzzles are all inventory-based, "use-item-on..." fare, and the game presents players with a clearly-defined obstacle to overcome at all times. Most challenges require multiple steps, but still--as one might expect--gameplay is highly linear throughout. 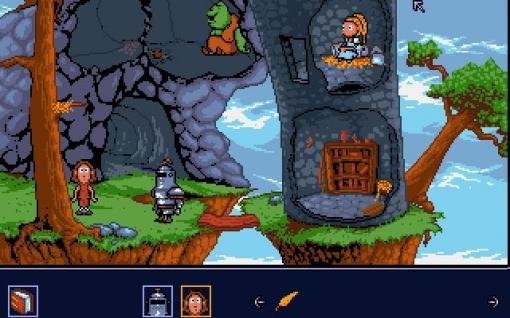 The dual-protagonist approach, however, is one of the areas where the game stands out. Players switch between the knight and squire by clicking on their portraits at the bottom of the screen. There are certain things only one character can do. The burly, slightly stuck-up knight, for instance, insists on leaving menial or dangerous tasks--such as retrieving a small rock from the ground or entering the ogre's cave--to his ever-willing companion. The most interesting feature of the double-character design is that knight and squire each have their own inventory, and can exchange items between themselves when they're together. The ratio of puzzles solved by the knight to those tackled by the squire is definitely a bit lopsided, unfortunately. The squire, as might befit his job description, does most of the work while the knight stands by idly. Even though this is realistic, I would have liked to see a bit more of a "team effort."

Along with the two protagonists, other characters in the game include the king, his daughter, the ogre, and three castle guards. There are a few chuckle-provoking lines, but in general the dialogue is fairly utilitarian, serving either to provide the player with needed information or to reinforce the master-servant relationship between the main characters.

The similarities to the Goblins series are certainly noticeable, not only in terms of gameplay, but graphics as well. Indeed, the game's visuals are vivid and whimsical, rendered in 32-bit color at 320x200 resolution, displaying a surprising amount of detail for an independent game. The musical score consists of a handful of upbeat, medieval-style MIDI tracks constantly repeated over and over. Some may find the constant presence of the tunes annoying, but given the game's lighthearted nature, I find they complement the action. As in most games of this style and length, there are neither sound effects nor voice acting.

Knightsquire is a charming little escape into a fun, simple fantasy world that shouldn't take players more than an hour or so to finish. It has its shortcomings, but they aren't so much "faults" as they are natural consequences of designing a game simply to give players something fun to do on a rainy afternoon. Those looking for thought-provoking questions and an epic, multi-layered experience won't find them here, but creative puzzles and charming environments await those who choose to don their suits of armor and set out to save the princess.

The 828 KB game can be downloaded from the Adventure Game Studio site in the "Short Games" section.

What our readers think of Knightsquire