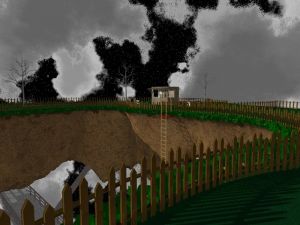 "Replayability" is something of an alien concept within the adventure genre. For the most part based around linear stories, supported by puzzles (ideally) created to fit specific points in the narrative, a natural consequence is that most adventure games, once completed, don't have much new to offer on subsequent playthroughs. Scavenger Hunter tries something different. Developed by husband-and-wife team Sagewood Software, the key selling point here is that the game is genuinely replayable, thanks to the random selection of elements when you start a new game. Locations, puzzles and item locations differ each time. That this feature works exactly as advertised is to the developer's great credit; how well the game itself works, though, is less easily determined.

Certainly, a number of aspects of Scavenger Hunter are worthy of praise. The underlying setting is a fairly clever one. The Scavengers are an alien race that like to build worlds, stealing items from Earth to decorate their new creations. As an employee of a major insurance company, it's the player's job to travel to these conveniently uninhabited worlds to take back the stolen property. It's a simple idea, but one that works effectively, and it allows both for the variety of locations contained within the game and for the altered locations and object placement that come with each new game.

These changes between playthroughs really do work. Not all of the locations are used each time, which provides some fairly large differences for the first couple of games. The first time through, I found myself standing in what appeared to be a dairy farm; the second time I began my search in a winery. Each location has its own specific puzzles, while the settings on door locks and item placement also change upon replay; one door that had previously required a key was now unlocked, and in another case the key had moved. These changes do add some extra interest to a second or third outing, and I didn't run into any problems with unreachable items or anything of that sort. 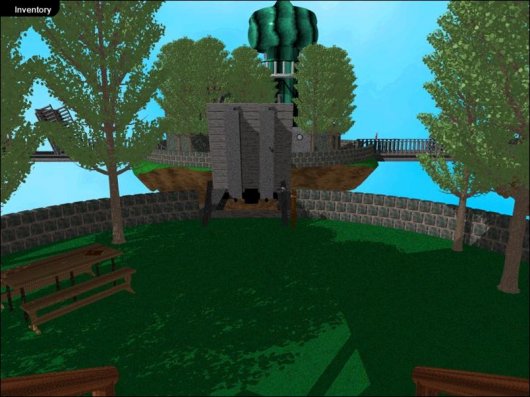 Of course, given the setting and objectives, it should come as little surprise that Scavenger Hunter is a game based predominantly around exploration. While there are certainly puzzles to be solved, a large proportion of time will be spent wandering around the landscapes searching for the items that the player is charged with retrieving, or for the keys and codes required to reach certain areas. The constant need to examine scenes in detail places an understandable importance on the graphics, and here Sagewood have done a reasonable job. Making use of the Adventure Maker engine, the game is locked at an 800x600 resolution, and the first-person, slideshow visuals are clean and clear, if a little simplistic. They're not going to challenge any modern computer, and they're not going to win any awards, but the graphics in Scavenger Hunter are perfectly pleasant, varied and well-suited to their function, while the objects layered on top blend well with the backgrounds. The locations take in, among others, a castle, a desert and an alien control room, so there's also sufficient variety to prevent things from becoming too dull.

The music used is also of a fairly high quality. While it is occasionally used to reflect the setting -- more tense music in the dungeons of the castle, for instance -- for the most part the music is relegated to the background. There are some catchy tunes here, and some people will love them. Others, however, may find themselves reaching to turn off the sound, because Scavenger Hunter makes heavy use of folk music. As musical styles go, this choice is one that is quite likely to polarise opinion, and the fact that there isn't an option to turn off the music means that some players may want to resort to muting the sound entirely. The fairly sparse use of sound effects means that this wouldn't do a lot to reduce the atmosphere, though it is something of an irritant.

With the number of things the game does right, you may be wondering why the score has dropped so low. Unfortunately, Scavenger Hunter suffers from a number of problems that mostly stem from the heavy focus on making the game replayable. Of these, the lack of variety in the puzzles is probably the most obvious. In any given world, there are one or two puzzles specific to the area. And while parts of the solutions to these may change, the actual puzzle does not, which reduces their effectiveness quite a lot upon replaying. The other types of puzzles are almost entirely based on unlocking doors. These locks come in a number of flavours -- you may be required to find a key, to enter a code or to solve a rudimentary equation -- but they all ultimately boil down to trawling through the environment for the object or passage of text required to get through the door. The problem is that, with a lack of other types of puzzles, there's little feeling of variety between playthroughs. 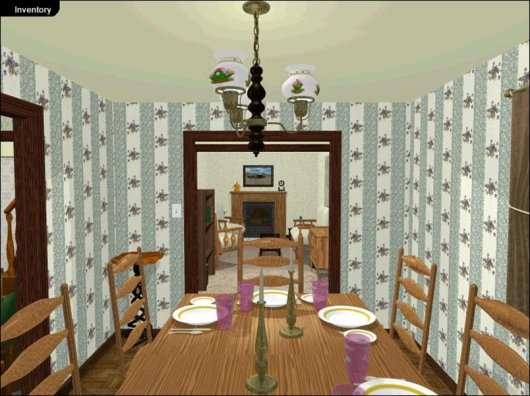 Furthermore, the constant reliance on lock-based puzzles, and the randomly generated nature of those puzzles, does a lot to destroy the sense of focus and purpose within any individual run through the game. There's a lot of fairly aimless wandering around, or of exploring an area only to find that there's nothing there. This isn't helped by the choice of plot; while it certainly lends itself to explaining the changes between games, the lack of any kind of narrative within the actual game significantly reduces the interest in persevering, since your actions seem to be devoid of any lasting consequences. What interest the game gains in overall replayability, then, it loses within any individual game. There may be thousands of different possible permutations here, but it would take a particularly keen individual to want to see more than two or three of those.

Scavenger Hunter is also marred by a couple of design faults. While its simple point-and-click interface is generally familiar and comfortable, node placement for movement and hotspot placement for interaction both range between incredibly intuitive and utterly baffling. For every area where movement is easy there's another in which camera positions appear to be missing, or where interaction is only possible from a strange angle; in one hallway, the player actually has to walk past a door and then turn round in order to interact with it. While these problems could be attributed to the large number of renders in the game, it's still frustrating, and it's made worse by the fact that not all objects can be interacted with. For every drawer that the player can open, there are two or three that don't have hotspots, which is strange when the player is supposed to be hunting for objects. Meanwhile, some areas aren't accessible for entirely unexplained reasons; the player can open one gate but not another, because there's no hotspot for the second one. These kinds of things kill the sense of immersion, because there's a constant stream of reminders that your ability to interact with the world is severely limited by arbitrary factors.

Far worse, though, is the actual puzzle design. Not because the puzzles are in themselves poor, but because their rules are unhinted and their solutions unintuitive. Stumble across a keypad with some highlighted numbers and a couple of mathematical symbols on either side, and using no rhyme or reason, you'll need to put those highlighted numbers into an equation using the symbols and then try the solution as the combination. It's a nice idea, but with multiple potential solutions, it's also a frustrating one that depends on leaps of logic and trial-and-error. And the equation locks are by no means alone in this regard; pretty much every genuine puzzle in the game suffers from this problem (lowering a castle drawbridge is a particularly cruel example). With no feedback on attempts made to solve a puzzle unless the answer is correct, and with no hints as to how to approach it, Scavenger Hunter is a game that will drive many players to the available hint guides. 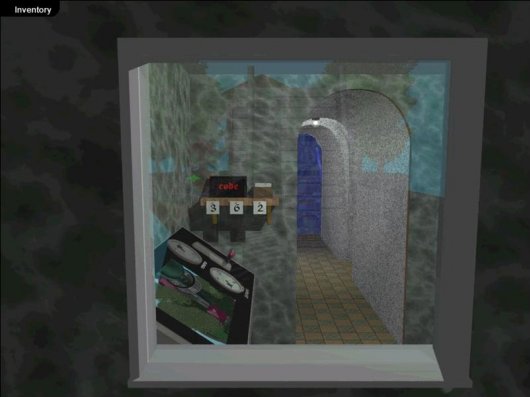 Without the puzzles favourably complementing the solitary exploration, the result is that no individual playthrough of Scavenger Hunter has all that much to sustain interest. And while the possibility of exploring a new environment is an enticement to return, these are likely to have been seen after two or three runs through the game. Once that is done, there's little left to draw the player back except minor variations on more of the same. That's not to say the game is a complete disappointment by any means, however. Scavenger Hunter is a game based around a compelling idea, and there's a certain fascination about a game that genuinely changes each time you play it. Anything that does something different is bound to suffer from problems that have yet to be ironed out, and for some players, what is here will be enough to provide many hours of enjoyment.

Available directly from the developer's website (along with a playable demo for those who'd prefer to sample the game first), Scavenger Hunter deserves attention for taking a fresh approach in a genre that doesn't often allow for innovation, and if Sagewood Software can match the replayability with a more complex game design in future, they could well be onto a winner. Unfortunately, once one looks behind the novelty here, there's not much to recommend this particular game. As it stands, Scavenger Hunter is something of a noble but failed experiment: it's ambitious, it's novel, and there's some entertainment to be found, but its appeal just isn't strong enough to make you want to keep playing "The Replayable Adventure" for long.

Scavenger Hunter is certainly novel, but it just isn't fun enough to make most players want to take advantage of the much-vaunted replayability.

GAME INFO Scavenger Hunter is an adventure game by Sagewood Software released in 2006 for PC. It has a Illustrated realism style and is played in a First-Person perspective.

What our readers think of Scavenger Hunter