We get a small commission from any books sold.
All Bitmap Books
Written by
Kim Wild — March 12, 2007

Hotshot defense lawyer Phoenix Wright has been something of a revelation in the modern handheld world, and the success even managed to surprise Capcom, who took a gamble by bringing the Phoenix Wright: Ace Attorney series to the West -- a decision which paid off in spades. Originally released in Japan under the name of Gyakuten Saiban, the series had previously established a well-deserved cult following over the course of three Game Boy titles. Upon its arrival on our shores, updated and released on the Nintendo DS, Ace Attorney was critically acclaimed and quickly sold out, with Capcom having to re-issue the game in America to keep up with demand, further cementing the DS's reputation as a solid platform for the adventure genre. Not surprisingly, Phoenix now returns with the next game in the series, Justice for All, and although it's not quite as good as its predecessor, it's still an excellent adventure in its own right.

Although it is a sequel, and many references are made to previous events and characters, Justice for All can be played by those who are new to the series without being confused by the storylines. In a similar fashion to the first game, the opening case acts as a tutorial for those who aren't familiar with how the game works. Phoenix Wright awakens from a bad dream and is attacked, losing his memory in the process. The intrepid lawyer finds himself defending a client he doesn't remember in a legal role he needs to re-learn as he goes. While it is understandable to feature a tutorial level, the amnesia storyline is rather clichéd, and it isn't long before you start longing for something with a bit more substance.

Each case is presented in two different ways, including the investigation where crime scene locations are visited, people are interviewed and evidence is collected, and the court trials, where suspects or witnesses are interrogated in order to find contradictions. Unlike many console adventure games, you don't directly move Phoenix, instead moving a cursor around to look at static backgrounds or select options from a menu. For traditionalists, it's a perfect game: the DS touch screen means using the stylus is just like using a mouse, and it's entirely point-and-click without a timed sequence in sight. During investigation, there are four options to select: Examine to look closer at objects on the scene, Move to leave for a different place, Present to use an item with another person, and Talk to speak to the character onscreen. Evidence is stored in your inventory, while a person's profile is automatically added upon your first encounter. 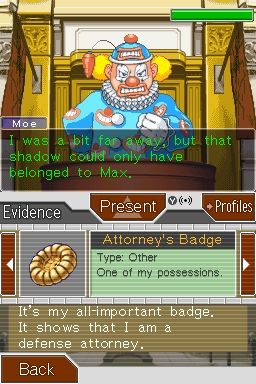 In the courtroom, many points made by each witness on the stand need to be pressed further or challenged, either by selecting the appropriate button or shouting "Objection" into the microphone. Once a contradiction surfaces, Phoenix must present evidence at the correct point in the conversation to raise a new line of questioning. Getting this wrong will result in a penalty, and a status bar depletes each time. If this happens too often, it's game over in the form of a "Guilty" verdict. Fortunately, it is possible to save at almost any position, so you're never forced to replay too much.

Several tweaks have been made to the overall system since the last game, though not substantial ones. Along with items of evidence, you can now present a person's profile during a trial to move the case forward, or to gain additional information from witnesses during the investigation. It's a welcome addition to the gameplay, as it adds more depth and means a bit more thought is required on the part of the player.

From time to time, specific questions will crop up during trials that require you to decide on a course of action or present evidence, although the correct answer to these isn't immediately apparent. These moments played a part in Ace Attorney, but generally agreeing to everything brought about the right result, and in Justice for All this isn't the case. It's not uncommon to follow a complex line of reasoning, feeling that you are supposed to, when in reality the correct answer is far simpler. Although this can prove frustrating at times and can feel like you're being misled, really you are being challenged to think rather than just following an interactive courtroom soap opera. 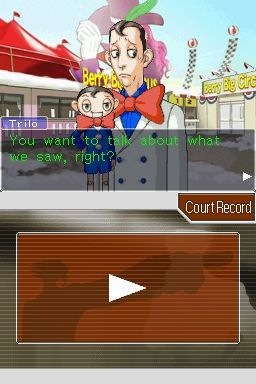 Those who did play the original will quickly notice that the graphics of returning characters like Maya, Mia, Detective Gumshoe and the Judge are re-used, but as it's a joy to see such familiar faces, it really doesn't matter. Some locations are also re-used, such as the courtroom, detention center, police station and Wright's law offices, although this is to be expected. Like in the original, characters have exaggerated expressions and gestures reflecting strong emotions like anger, joy and sadness, which not only gives them personality but proves entertaining as well. You'll spend plenty of time talking to them, and all of the game's dialog is text-only, with the exception of the odd sound bite used for objections from either side of the courtroom. There's still no way to skip through conversations faster, unfortunately, and there are a few typos here and there, but overall the high quality of the script will have you happily reading along at the game's intended pace.

After mastering your craft in the tutorial, the second case sees Phoenix defending a very familiar face, making the verdict far more personal to him. Of course, all the evidence is hopelessly stacked against him, but as usual, nothing is as it seems, and you can expect plenty of weird events and eccentric characters like Ini Miney making an appearance. From a personal perspective, the storyline of this case didn't grab me; parts of it are predictable and feel drawn out and it lacks much of the off-beat humour that makes Phoenix Wright stand out. You'll also come across a new main character, the daughter of famed Prosecutor Von Karma from the first game. She acts as the prosecuting attorney for the bulk of the new game, proving every bit as fiercely competitive as her father and carrying a whip that she is more than happy to use on anyone who disagrees with her (particularly spiky haired defense attorneys!) 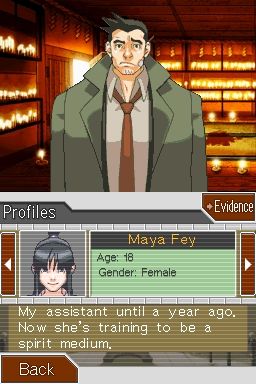 It is during this case that a new addition to the game is introduced called the Psyche Lock. Through the use of a psychic necklace, people who have a secret they don't want to reveal will be visibly "padlocked", often with 2-5 locks at one time, and a piece of evidence has to be presented to break a lock and move onto the next. Once all locks have been removed, the secret can then be revealed. Sometimes upon first encountering a person that has a Psyche Lock, you won't have the evidence needed to unlock it and you'll have to go back when you finally have the right information. As in court, getting your information wrong will deplete your status bar, though if you run out completely, here you can start again from the very first lock with no further margin of error. Still, this can be annoying if you have cracked four locks but mess up the last one and have to remember the correct sequence from the beginning. Successful unlocking gives your status bar a boost. While not really being a fundamental gameplay difference, the use of the Psyche Lock adds a puzzle element to the investigation side of things, making it a more cerebal experience.

The third case is where the writing really starts to shine and makes up for the weaker first two cases. A mysterious murder has occurred at the circus, and the bulk of the game will be spent exploring the circus locations and chatting to the eccentric inhabitants including Moe the Clown, stammerer Ben the Ventriloquist with his psychotic puppet Trilo, and the somewhat dim Regina the Animal Tamer. While at times the plot gets a little crazy, the humour and writing manage to make it easy to suspend any disbelief in its credibility. 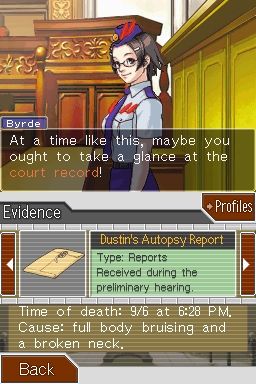 The last case is the best of the lot, not only proving to be the longest of the game, but providing many twists and turns that will keep you absolutely gripped to the bitter end. One television superhero has been killed at a gala event attended by Phoenix and Maya, and the murder suspect is his main rival. This time, however, a related plotline runs throughout that gives the trial a very tangible sense of urgency for Phoenix, though I won't spoil the details for you. This case also sees the re-appearance of some popular characters from the first game who never cease to be entertaining, and also offers two possible outcomes depending on key decisions you make.

What is a bit disappointing is the lack of a fifth case, or at least a DS-specific case in general. In Ace Attorney, completion of the fourth case opened up the last, which was longer than the rest of the cases put together and used the unique DS features like the microphone and touch screen to great effect. Without this, Justice for All is shorter; you'll still get about 15-20 hours out of it, but there doesn't seem to be as much content, and what you do get feels like a step backwards from a gameplay perspective, which is a shame. There are also a couple of instances where it's hard to see where the game is going, meaning some of the solutions require a leap of logic or guesswork that force a degree of trial and error, so the game is not without its moments of frustration.

While I was underwhelmed by the game during the first two cases, the excellent writing of the latter two, plus new elements like the the Psyche Lock and more ambiguous court decisions ultimately won me over. It may not be quite up to the standards of the first game, and it's missing a case that makes use of the Nintendo DS's capabilities, but Justice for All still has the capacity to entertain, captivate and involve you with equal measure. There's really nothing else out there quite like it other than its own predecessor, so if you were even remotely compelled by Phoenix Wright: Ace Attorney, this game is an essential treat for your handheld that is well worth savoring.

While not as good as the original, Phoenix Wright and his comrades still manage to entertain and deliver with a fantastic script and engaging courtroom drama. Here's hoping that Capcom will see fit to translate the third game in the series.

GAME INFO Phoenix Wright: Ace Attorney - Justice for All is an adventure game by Capcom released in 20072010 for 3DS, DS, iPad, PC, PlayStation 4, Switch, Wii and Xbox One. It has a Comic cartoon style, presented in Slideshow and is played in a First-Person perspective. You can download Phoenix Wright: Ace Attorney - Justice for All from: We get a small commission from any game you buy through these links.
The Good:
The Bad:
The Good:
The Bad:

What our readers think of Phoenix Wright: Ace Attorney - Justice for All