If you hear a gurgling sound in the background, that's just the potential of another promising game being needlessly flushed away.

Back when new hope still flowed freely, Full Pipe seemed an ideal choice to be the debut adventure on Valve's renowned Steam distribution system. Even beyond the remarkably synchronous names, this unheralded adventure is exactly the sort of game that both benefits from and contributes the most to the cause of digital distribution. Previously available only in the developer's native Russia, Full Pipe is arguably too quirky, too raw, too "niche" to warrant an international release as a boxed product. But with the ability to download a game without borders at a click of a button, now even the underdog has a chance to reach worldwide audiences.

Plunge a little deeper, however, and the quality of Full Pipe itself soon begins to clog up the perfect plan. It doesn't happen right away, as the game swells from a delightfully simple premise to a deceptively complex design, and has undeniable charm oozing out of every seal and gasket. Unfortunately, the experience quickly sinks under an endless stream of illogical puzzles, and with virtually nothing in the way of story to keep it afloat, much of the enjoyment is ultimately sucked down the drain for good. 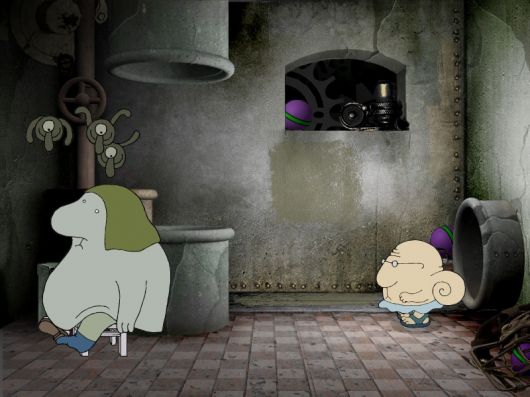 Of course, there are those who might argue that Full Pipe qualifies more as a puzzle game than an adventure in the first place, though that distinction seems unnecessarily restrictive. Nevertheless, the game does forsake many of the genre's conventions, stripping the gameplay down to its core basics without any pretense of characterization and plot.

Full Pipe, subtitled (total flue) in the Steam version, begins with a scene of the nameless protagonist sleeping soundly until a monstrous hand emerges from under the bed to snatch one of his slippers and disappear back to the depths. Upon awakening, our hero -- a rotund little bald fellow who looks something like a Mr. Potato Head with a disproportioned coil on his back -- discovers the theft and decides to pursue the shoe down a giant hole beneath his room. That's right, there'll be no saving the world or exposing grand conspiracies in this game. Following footwear is what it's all about.

Actually, even that's not true for long, as the slipper is found immediately, depriving the game of its one tangible motivation. Instead, the singular abstract goal becomes finding a way back to the surface. Doing so will require working your way through eight levels of a subterranean sewer-like world consisting of 36 different "cells", each connected by a series of pipes and elevators. Naturally (or in this case, quite unnaturally), many of these passages are inaccessible at first, blocked by the various denizens of the deep and requiring you to solve puzzles or succeed at mini-games in order to advance. 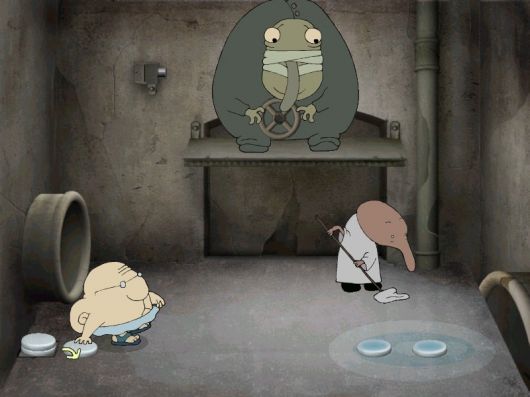 In some ways, gameplay in Full Pipe is reminiscent of Samorost or the Goblins games of old, presenting a series of individual challenges in what is essentially a mental obstacle course. But while those games continually push the player forward in a linear fashion, the world of Full Pipe is intricately interconnected, so the deeper you go the more complex the puzzle possibilities. Or at least, that's the theory. Unfortunately, the developers rarely capitalized on the benefits of their own clever design. So while you'll often find yourself backtracking to rooms you've visited previously, you'll usually just be passing through or performing variations of earlier actions instead of finding new strategic opportunities available to you. It's a waste, though hardly the least of this game's problems.

The puzzles themselves are pretty standard fare, relying almost entirely on basic inventory applications. You can't combine items, so progress is generally just a matter of applying the right object in the right place. But that would be too easy, so to increase the difficulty, Full Pipe opts for the time-honoured tradition of using puzzles that make no sense whatsoever. Someone, somewhere, thought this was a good idea. I'm here to proclaim, right here, right now, how very very wrong they were.

Just this once, I'll reject my own principle of never giving spoilers, as I'm not sure I could make up examples as both pointless and absurd as some of what I encountered here. (For those who hate spoilers, rest assured that there is plenty more frustration to discover on your own.) Very early in the game, one particular bespectacled creature was babysitting a lever that I presumed I needed to flip. All efforts (both strategic and otherwise) to overcome this dilemma were futile, but lucky for me, the creature was willing to trade me his glasses in exchange for a cupboard drawer he proceeded to wear as a hat. Why did I want the glasses? I didn't, or at least I didn't know I did, but I was glad to be rid of the drawer, as it had proven too big to turn into an egg in a previous room. If you're not exactly following this line of reasoning, join the club. That growing look of bewilderment on your face is exactly the same one on mine as I played, only without the frequent bouts of cursing. This is neither an isolated incident nor the worst offender of the lot; just a random early indicator that logic and reason are generally unwelcome guests in the land of Full Pipe. 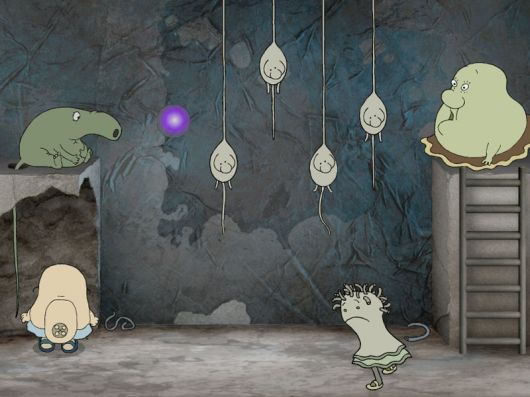 Admittedly, this is what a defense of the game would call "the point". As the marketing materials describe, Full Pipe takes place in a "surreal and psychedelic world" so a certain degree of outside-the-box thinking is expected. Unfortunately, that was no rabbit hole players descended, and this is no Wonderland. Here the game's abnormality really just comes across as a blanket justification for arbitary obstacles, which is neither fun nor mentally stimulating.

Contributing to this issue is the game's total absence of dialogue. Full Pipe features a large assortment of imaginary creatures, but none of them ever speak, including the playable character. While not an inherent design flaw by any means, this decision means that players are completely dependent on visual factors for clues, and the game does a poor job of creating suggestive scenarios. The characters are rarely helpful even when you attempt to interact with them, often providing no response whatsoever, leaving trial-and-error as the only real avenue in many cases.

As you continue to slog your way through one impractical puzzle after another, you'll periodically encounter a handful of mini-games. Activities include such things as trampoline jumping, shuffleboard, shooting hoops, and catapult targeting, to name just a few. Each mini-game requires a measure of hand-eye coordination, though most come down more to recognizing timing patterns, so even the less dextrous should prevail with some practice. None are particularly long, and if you fail you can simply start again as often as you like, but succeeding is a requirement to progress. While hardly riveting entertainment, they're cute diversions for a while and serve as a breath of fresh air in the otherwise-stifling atmosphere of Full Pipe puzzling. Once completed, however, there's no way to replay some of them short of loading a saved game. 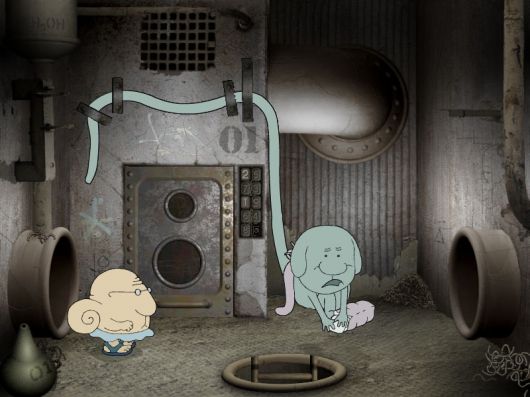 Both the mini-games and the standard gameplay are controlled entirely with the mouse, as Full Pipe uses a traditional point-and-click interface. There are few complaints here, as the controls are generally intuitive and user-friendly. The smart cursor changes over interactive objects and the inventory and menu screens are easily accessed. The one drawback is that it's often difficult to align the ambiguous interactive point of the cursor with hotspots, so at times you may find yourself missing an object you're trying to interact with.

The real highlight of the interface, however, is the map, which shows a recognizable image of all cells you've visited and their place in the overall underground layout. Better yet, clicking a room will transport you there immediately. At first you'll probably find yourself sticking with conventional travel, as the areas are small and easily traversed, but the more sections you uncover, the more you'll begin to rely on the map to speed things along.

The game's third-person graphics are initially appealing, simple but sweet in their total lack of pretension, but ultimately they too become disappointing. The backgrounds are nicely rendered and semi-realistic (realistic in style but unrealistic in setting), while the characters and interactive objects are done with a very cartoony look. They don't blend together at all, though this may have been intentional and I wasn't bothered by the disparity. The problem visually is that there's not nearly enough detail or variety to maintain interest. The environments are dreary and plain by nature, and there's so much repetition that they quickly graduate to monotonous and dull. Similarly, the music is an interesting mix of earthy-sounding jazz, but new tracks are so rarely introduced that there aren't nearly enough to carry the game. 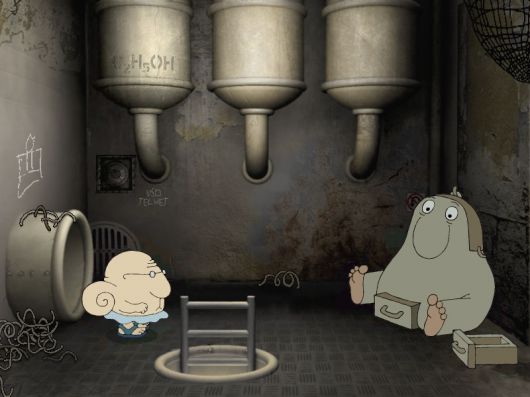 With enough perseverance and probably a few exasperated peeks at a walkthrough, players will finally burst back up from the depths, but Full Pipe itself just isn't so lucky. By neglecting story and characters in favour of a singleminded puzzle focus, the game's target audience was a shallow pool to begin with. But even those drawn to its early charm and conceptual promise will find themselves turned off by a repetitive design structure filled with largely nonsensical puzzles.

Full Pipe is currently available as a 600 MB download only through Steam, and while I won't debate the merits of this somewhat controversial delivery system, it should be noted that Steam itself recommends a gigabyte free hard drive space and requires an Internet connection to activate the game. By this stage, however, it should be obvious that I can't recommend the game to most people even at its very reasonable retail price of $9.95 USD. If you're just looking for something a little different, Full Pipe (total flue) is certainly that, and there are indeed some entertaining moments to be found here. Unfortunately, they're so few and far between that for everyone else it's simply not worth the ever-descending journey to find them.

Full Pipe's initial charm and intriguing concept soon give way to a tedious and frustrating gameplay experience. It has its moments, but if the complete lack of story doesn't alienate most adventure fans, the poor quality of puzzles mostly likely will.

GAME INFO Full Pipe is an adventure game by PIPE Studios released in 2006 for PC. It has a Stylized art style and is played in a Third-Person perspective.

What our readers think of Full Pipe