We get a small commission from any books sold.
All Bitmap Books
Written by
Rob Michaud — August 23, 2006

I used to have a full head of hair. It was my pride and joy; long and luxurious and always manageable. Then I picked up a copy of SAFECRACKER: The Ultimate Puzzle Adventure by Kheops Studio, and it all went downhill from there. It started simply enough, with a marble sliding puzzle, but soon spiralled into unlocking complex numerical codes, and staying up a little later each night trying to figure out how to pump water into a fountain just right in order to grab one more key to open one more lock. And now I stand before you a humbled -- and bald -- man, though I'm hopefully stronger for it.

It takes some courage to call yourself the "ultimate puzzle adventure", but Safecracker definitely tries to live up to its title. The game is a spiritual sequel to the late '90s game of the same name, which found you breaking into a series of safes in order to land a job with a security company. The challenge before you will be similar this time around, though the content is all new and the premise is completely different than its predecessor.

Quickly establishing that story shouldn't get in the way of a good puzzle, Safecracker tosses your character right into the task at hand with little fanfare. An eccentric millionaire has died, and in keeping with his passion for safes, he has hidden his will somewhere in his mansion behind a series of puzzles and safes. And when (or if) you find the will, what you do with it is up to you. 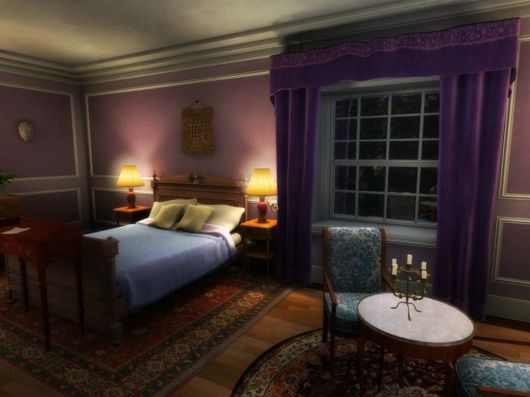 It's a simple premise, but when combined with the game's high production values, it's exactly what is needed -- no more and no less. As you explore the mansion, you begin to learn more about the life of the man whose fortune you are trying to find, and about the motives of the people who have hired you, which ties in nicely with the decision you have to make at the end of the game. And just to make things a tad more difficult, you'll come across many clues, and while some of them will come in handy later, some serve no purpose but to drive you insane wondering where they fit in.

One of the first things you'll notice when you start Safecracker will definitely be the lush graphics. There's not a lot of room for dazzle when your only location is a large mansion, but Kheops has done their best to make every room as realistic as possible, with a few showstoppers like a large garden room, dominated by a fountain with a key just out of reach for the majority of the game. There are a few frustrations with the graphics, though, one of which is the fact that your character doesn't show up in any reflective surfaces, and facing a mirror and seeing only the room behind you has a tendency to pull you out of the game.

Music is kept to a minimum, but fits in perfectly with the game's theme, and is mainly comprised of what could only be described as sneaky thief music. The score is very subtle, in some cases barely present at all, but manages to add a lot to the atmosphere. 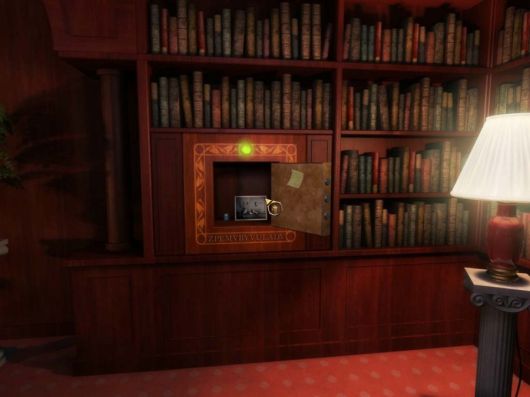 In the early stages of the game, the voice of the main character didn't seem like much of a big deal to me. After all, being the only character in the game, there's probably not much talking to be done, right? But as our character works his way through the mansion he begins to talk to himself, offering himself pats on the back when a puzzle begins to come together, and being positively gleeful when he moves past particularly tough challenges. The voice is exactly what I expected when I heard Safecracker was a game about a thief breaking into safes in a mansion -- a light British accent with just a hint of mischief thrown in. I only wish that other publishers would do as well as Kheops has done in casting their main characters.

Navigation in the game is node-based, so you'll click a directional cursor to move to a new screen. Each screen offers full 360-degree camera panning, which will be necessary since clues can be hidden anywhere -– one puzzle had me going crazy until I happened to look up at the ceiling after a long period of cursing at the screen.

Of course, the real measurement of Safecracker is its puzzles. More so than other adventures that have a stronger story emphasis to support it, this type of game is dependent almost solely on the quality of its challenges. Fortunately, Kheops hasn't disappointed in that regard. 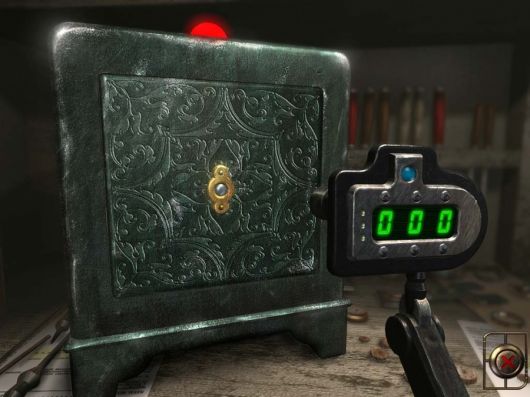 Puzzle variety is all over the place, from standard inventory application to code-protected locks to different tile sliding puzzles, and even an icon-based version of Sudoku. These challenges range from incredibly simple to absolutely, mind-bogglingly difficult. One of the challenges of the game is deciding when to tackle certain puzzles, as they do not ramp up in difficulty through the game, but rather allow you to tackle many of them in the order that you wish, assuming you've found the necessary clues to proceed. My only complaint about the puzzles in the game is that some of them are rather clichéd, having been used many times before. And as with most games in this genre, there's little replay value once you've figured out the solutions. Your mileage will vary depending on how adept you are at solving puzzles, but most people can probably expect to spend 6-8 hours their first time through the game.

By the time you've reached your final goal, you will have worked your way through 35 different puzzle-guarded safes, and it would be nearly impossible to keep track of things to do if it weren't for an excellent map system. Right clicking on the screen will bring up your inventory, and clicking on a map icon will show you what parts of the mansion you have uncovered, along with which rooms contain puzzles and which ones have been completed -- a green X mark for solved, and red X marks for unsolved. This is very useful when you need a reminder of where to proceed next.

If you're considering SAFECRACKER: The Ultimate Puzzle Adventure, it's important to be clear about its dominant puzzle focus. While Kheops has given this game its usual stamp of high quality, it's a much different style of game than the studio's other titles, and anyone looking for a more traditional adventure might find their expectations disappointed. If you're an avid puzzle gamer, however, this game is definitely for you. While there are some clichéd puzzles and the replay value is limited in what is already a fairly short game, there is still plenty of variety, and it's a challenging game at a very reasonable price. Just don't blame me for baldness when you start pulling your hair during some of the more difficult puzzles.

WHERE CAN I DOWNLOAD SAFECRACKER: The Ultimate Puzzle Adventure

SAFECRACKER: The Ultimate Puzzle Adventure is available at:

A must-have for puzzle fans and definitely worth a look for anyone who values an intellectual challenge.

GAME INFO SAFECRACKER: The Ultimate Puzzle Adventure is an adventure game by Kheops Studio released in 20062008 for PC and Wii. It has a Illustrated realism style and is played in a First-Person perspective.

What our readers think of SAFECRACKER: The Ultimate Puzzle Adventure

3.5 stars out of 5
Average based on 12 ratings
Your rating

As the title says.

You want puzzles? Here they come. A great brain fest. With twice the length on same quality it would have been perfect. Read the review »

Puzzle game that delivers what it promises.

Play time ~9 hours This game delivers what it promises: a puzzling experience. There is minimal exploration, as the entire time you are inside a home. Although, the graphics are very excellent, not being able... Read the review »