We get a small commission from any books sold.
All Bitmap Books
Written by
Berian Morgan Williams — February 5, 2006

Just Another Point n Click Adventure is one of the amateur adventuring community's hidden gems. Released in January 2003, it originally garnered much praise on the Adventure Game Studio forums, but has been sadly overlooked by the world at large. This review will hopefully serve to bring it back into the public eye.

The story of JAPNCA focuses around two brothers, Andrew and Alastair. Andrew, an 18-year-old unemployed layabout, has been threatened with eviction by his mother if he doesn't find work or do something with his life immediately. Not wanting to get a normal, boring, menial job, Andrew pursues his younger brother Alastair's plan to get rich quick with minimal effort. With Alastair too young to enter himself, Andrew becomes a contestant on a new reality TV show that's starting soon called Treasure Hunter.

The game is divided into four small 'acts', each with some minor goal(s) relating to Andrew's success in applying for a place on the TV show. For one of these acts we control Alastair, and for the others we play as Andrew. This makes for an interesting shift in perspective, with a number of different hotspot interactions (though admittedly mostly limited to looking at each brother's possessions) depending on which brother you're playing. 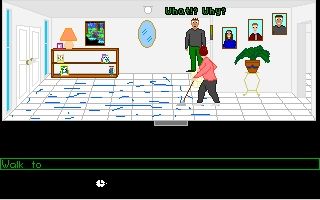 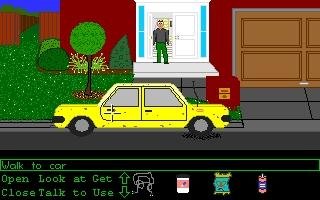 Humour is very much JAPNCA's forte. There are plenty of hotspots, many of which prompt a sarcastic or humorous response. Dialogues between the characters, and indeed each character's monologues, are well-written and again often hilarious. The game at no point takes itself seriously, and is packed with "breaking the fourth wall" type of gags and references to other adventure games. The opening of the game is in fact one long AGS community and adventure genre in-joke that has no actual relevance to the rest of the game. It does, however, very much set the tone for what's to follow.

The puzzles in the game are mostly logical and straightforward. Largely inventory-based, with one or two dialogue puzzles (which can be repeated if failed), they will rarely cause any kind of difficulty. Despite this, the game has a fairly hefty length, with lots of dialogues and stuff to look at to pad the gameplay. This game is technically the first part in a series, but since nothing has been heard from the game's developer, CMonkey, in almost three years now, it's unlikely the game will ever see a sequel. This is a real shame, since the first game is of such promising quality and the story is left unfinished, although it does round off well enough to act as a standalone game without any problem.

Graphics are of a functional standard -- by no means amazing quality, but not bad, either. They are drawn in a comic-realistic kind of way, with everything very pixelated but clearly visible and recognisable. Animations are aplenty, although sometimes sound effects and fades-to-black are used to cut corners. The sound effects usually serve to make this seem more amusing and charming than lazy, though, so it works well. Music and voices are completely non-existent, but sound is used liberally, with effects for every major event and the occasional background ambient noise where appropriate. 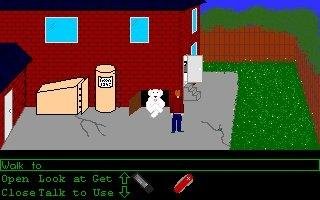 The game's interface is similar to the traditional LucasArts style, except with fewer verbs and the welcome addition of the currently selected verb staying selected after interacting with a hotspot, instead of having to reselect of the verb each time in real LucasArts games.

The one minor (or major, depending on your point of view) failing of JAPNCA is the spelling and grammar. While the interactions and dialogues are always very amusing and well-written, their humour is marred by the sloppy presentation. Every 'I' in the game is lower-cased, commas are missing, causing sentences to take far longer to understand than is necessary, and a number of words are misspelled. To many people this sort of thing probably doesn't matter much, but delivery is crucial to comedy, and for aspiring grammarians like myself, it's something of a sore point that causes an annoyance in an otherwise fine game.

It should also be noted that some players may encounter a game-crashing bug early in the game, which was unfortunately never addressed. The recommended solution to this issue is to run the game at its lowest resolution in a window, which should get you past the problem area and back on your way.

In closing, Just Another Point n Click Adventure is an excellent humorous game, with enough to keep a player engaged for several hours. For the developer, it's a fine debut, and well deserving of the planned sequels. We can only hope CMonkey reappears from the ether to follow through on his promises of further episodes. If you're one of the many people who've never even heard of JAPNCA before, download it, and enjoy!

What our readers think of Just Another Point n Click Adventure