Delaware St. John, Volume 2: The Town With No Name review

We get a small commission from any books sold.
All Bitmap Books
Written by
Rob Michaud — December 31, 2005

Along with comedy, horror is one of the hardest genres to navigate successfully. For every Some Like It Hot, there's a Bio-Dome. And for every Texas Chainsaw Massacre or The Grudge, there's a Darkness Falls or Jesus Christ, Vampire Hunter. And when you start talking about sequels, it gets even worse. So when I heard that independent developer Big Time Games was planning a ten volume horror-themed adventure series about a paranormal investigator named Delaware St. John, I must admit that visions of Jason in Space were dancing in my head.

Luckily, I was wrong. And while I felt that The Curse of Midnight Manor (the first game in the set) had some issues, there was enough to show definite potential for a great series. And after playing through The Town with No Name, I think the developers just may pull it off.

For those who haven't played the first game or just need a refresher, you play as Delaware St. John, a young man with a bad habit of being contacted by spirits in need of assistance in moving on to the afterlife. At his side, at least remotely, is his partner Kelly, who assists him via VIC -- a camera, recording, and communication device that he carries on him. 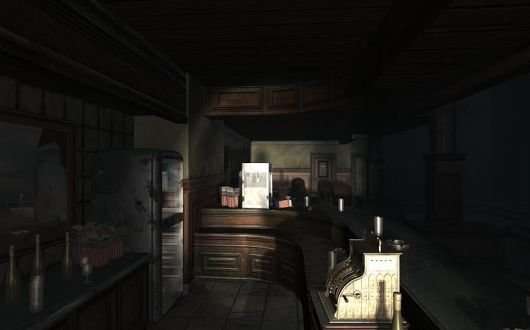 In the first installment, Delaware investigated the disappearance of a group of teens at a local hotel, as well as the mysterious murder of a magician in the same location. In The Town With No Name, Delaware is doing inventory in the bookstore he owns with Kelly when one of the books reveals a picture of a town that doesn't exist on any map; a town to which Delaware is inexplicably drawn. And once there, he finds not only an old nemesis, but also a tie to his past as well.

While the first chapter of the first game struck me as rather clichéd, in the second chapter I could see the promise behind the characters and the story arc. And I was definitely not disappointed by the time I had finished TWNN. Big Time has taken what could have been a series of by-the-books horror stories and pulled them together into what is shaping up to be an epic adventure over the course of its ten installments.

As with the first volume, the developers have split the game into two separate chapters, although they tie together seamlessly. And also like the first game, the second chapter is locked until the first is completed, so as not to spoil the story. Fortunately, Big Time has made it clear that there actually is a second part, as many people were unaware of this during the first game and missed out on a great conclusion to the story. 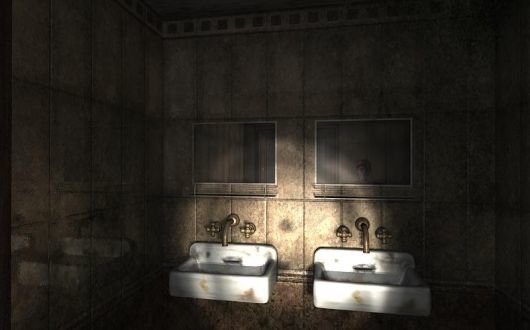 The graphics for TWNN are a huge step up from the first installment, and that's saying an awful lot considering how well done they were to begin with. The splash screen, menus, and cutscenes still have that wonderful hand-painted look that was such a great touch in the first game, and the main graphics have gotten an overhaul that, for the most part, rivals many of the retail games on the market right now. From the rusted cars and decaying playground of the opening scenes in a deserted town to the peeling wallpaper and water-stained statues of an abandoned orphanage, Big Time has really gone all out and raised the bar for creepy, atmospheric screens. As with the first game, you will be navigating static screens with the occasional animation or cutscene. And once again the developers have resisted the temptation to go the gross out route, working with a sense of understated dread instead of throwing blood and gore in your face.

One of the best parts about Midnight Manor was definitely the music score and sound effects, and that has continued – if not been surpassed – with TWNN. The quiet, haunting score that filled the first game with such a subtle, creepy feel is back and in full effect. I love the fact that the music is never thrown at you for a sense of shock, instead preferring to hide in the back of your mind, lending just enough to the game to make you uneasy without being overt.

Sound effects have also taken a step forward, and this time play into the puzzles that Delaware must solve. So on top of the creaking floors and slamming doors that were so effective before, this time you will have to listen to what is going on around you in order to solve the mysteries that are going on. As much as I hate to repeat a previous review, this is a game that needs to be played with the lights out and the sound on a pair of headphones cranked up. 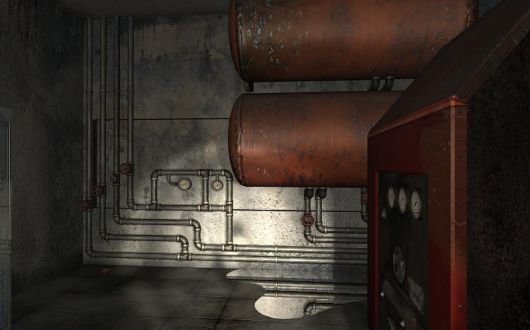 Voice work has definitely gotten better with the current installment, and the main actors seem to have settled much more comfortably into their roles. I enjoyed Kelly's voice in the first game but was not sold on the actor playing Delaware. But this time around I was much more impressed with his work, as well as the new actor playing Kelly's English friend Simon, on hand to help out the investigation. On top of that, the spirits are much easier to understand – even with the effects used on their voices. I would still prefer to see subtitles at some point in the future, as it seems pretty standard in most games today, but it was not as much of an issue this time around as it was during the last volume.

My biggest beef with Midnight Manor was the mixture of gameplay styles present, which really threw the game off for me. But as with everything else, Big Time has pushed forward and done what needed to be done to make for an incredible game.

As with the first title, TWNN is a first-person node-based game, with a fairly standard navigation scheme. On each static screen you'll be presented with a set of arrows pointing to the available directions that can be chosen, as well as an Exit and Reverse button. But this time around, screens are much less similar from location to location, and therefore much easier to navigate than in the original. However, as with the first game, there are some pseudo-action scenes where a wrong turn can mean an end to Delaware, so it's a good idea to pay attention to your surroundings. 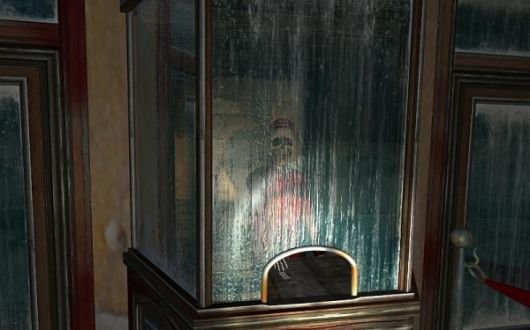 Puzzles in Town With No Name range from key finding to logic puzzles to some light code-breaking. But where the first game suffered from some incredibly easy puzzles and some logic issues as well, for the most part TWNN avoids those problems with a host of head scratching puzzles to be solved. While there are still a few things that I'm confused about, such as why I can't reach into a toilet to pull out a key instead of looking all over a theatre to find something to fish it out with, and why I'm still knocking down doors after complaining that they're locked for the past hour, they are head and shoulders above the previous volume.

And if you happen to get stumped along the way, VIC is back. This was one of the features that I really liked last time, and I was glad to see it make a return. During the game you'll come across areas where you'll need to make recordings of spirits or take photos of objects for Kelly and Simon to analyze. You can also contact Kelly for some subtle (and sometimes not so subtle) hints about how to solve a puzzle or where to go next. Of course in some cases you'll have to go it on your own, and I will admit to getting stuck a few times. The puzzles have definitely gone up a notch this round, and you will end up retracing your steps trying to find that one little thing that you missed. I would still like to see VIC used to solve a few more puzzles, and maybe leave it a little more vague about when to use it, but this is still a great feature to have, and one that I wish more games would pick up on.

One of the biggest issues that I went around and around with the first time was the presence of action sequences in an otherwise traditional adventure game. And while I haven't changed my mind about their place in this style of game, the few present here were much better integrated and didn't bother me as much. You'll still have times where you have to escape from certain death via node-based chase sequences, but because of the emotional investment in Delaware due to the better story this time around, there was a level of tension that I felt was missing before. 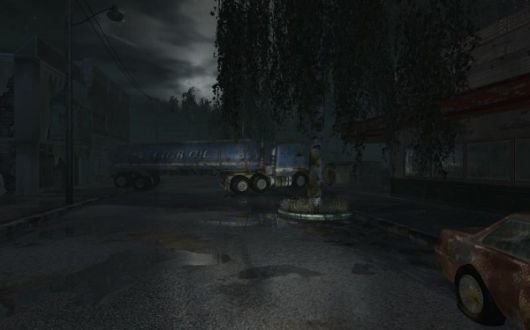 When beginning this game, I was really hoping it would be able to fulfill the potential the first game couldn't quite manage to maintain. Thankfully, I've been pleasantly surprised, as the developers have gone above and beyond what I expected to see from them in every aspect. The game is longer, the puzzles are harder, and the story is just getting better as it goes along. Most gamers can expect to spend roughly a combined total of five to six hours on the two chapters (compared to the three hours of the original) which still isn't long, but it's a blast every step of the way.

The Town With No Name won't be for everyone. I know that some people are dead set against static node-based games, and aren't going to touch this no matter how good it is. It's also a modest independent production, so of course it doesn't come with all the bells and whistles of games with larger budgets. It's a fairly short game for the price, too, which may cause some to question its value. But for those simply looking for a quality adventure, I can easily recommend TWNN. At the very least, see for yourself by downloading the demo from the official website, where you can also order the game. You won't be disappointed.

This is a series that is getting better each time, and that's pretty exciting considering that we're still just scratching the surface of Delaware's story at this point. And if Big Time Games can make this big a jump in just one installment, then I can't wait to see what they come up with next.

A welcome leap forward in the series that shouldn't be missed by anyone interested in the genre.

What our readers think of Delaware St. John, Volume 2: The Town With No Name