Déjà Vu I & II: The Casebooks of Ace Harding review

Déjá Vu I & II: The Casebooks of Ace Harding

We get a small commission from any books sold.
All Bitmap Books
Written by
Kim Wild — December 22, 2005

The detective mystery genre is perfect for adventure games. All that investigation, searching for clues, and following leads provides ample material for any puzzle solving setting. So it makes sense to create a series of adventures starring detectives. On the PC, we've seen many examples over the years, from Tex Murphy to Nancy Drew. In Déjà Vu I & II on the GameBoy Color, we're cast in the role of Ace Harding – a role that proves engrossing at times, but infuriating at others.

Déjà Vu I & II were originally developed as separate games by ICOM, with the first released almost two decades ago on various platforms. The GameBoy Color version, subtitled The Casebooks of Ace Harding, is a relatively recent remake of two NES releases. Rather than have the two games on the cartridge separately, here the two have been combined together to make it one coherent adventure, and as the story of the second game takes place directly after the first, the intended effect works well. On the downside, it means that you can't just play the second game separately unless you keep a save slot available for this purpose. An option to play either game at any point would have been a nice touch.

The first game opens with you waking up confused, groggy, and with a headache set to rival that of an intensive dentist session. You find yourself inside a dingy, smelly restroom, completely disoriented and unsure of your surroundings. With your right hand covered in blood, it's clear that something strange has occurred, but are you a victim of foul play or a part of something far more sinister? Suffering from acute memory loss and having no idea why or how you ended up inside a toilet cubicle, the adventure becomes a quest for your identity as well as trying to piece together clues of another soon-to-be-apparent mystery. Who is the dead man found in the office of your building? Why is there a woman tied up in the boot of your car? And just who on earth is J.S.? 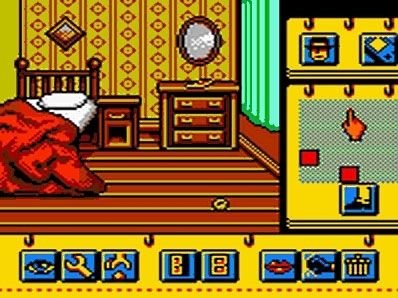 Déjà Vu II follows straight after completion of the first. This time, Ace Harding is in possession of all his faculties, but he has ended up on the wrong side of gangster boss Tony Malone. Two guys ruthlessly grab Ace, bundle him into the back of a car and before you know it, shove him yet again into a seedy bathroom, this time situated in a Las Vegas hotel. Without wishing to spoil the storyline too much, as it is linked with the previous game, thousands of dollars of the Mob's money has disappeared, and they suspect you of being part of the theft. Your job is to put on your thinking cap, find the stolen loot, and figure out who really took it before Ace ends up sleeping with the fishes.

According to the dictionary, "déjà vu" means "an illusory feeling of having already experienced a present situation." As video game titles go, Déjà Vu is perfectly suited to both games, as the first sees Ace Harding trying to find out why his surroundings are so familiar, while in the second, he is roaming familiar locations that played such a pivotal role in the original.

The interface for both games is a combination of text adventure with first-person images and icons. Using a cursor controlled with the D-Pad, you select the desired icon and then an object that you want to interact with on the main background. The icons include such familiar commands as look, use, pick up, and talk, as well as lesser used options like punch/push/hit and discard item. Each screen is made up of a background image with a text description of your surroundings that appears in the box underneath. This lower box also contains information on useful addresses you might collect along the way, your inventory, and any items that are inside an onscreen object such as a desk. A basic map made up of squares is also available, which is usually effective, if a little confusing at times to use. Unfortunately, interacting with the scenery and looking through your inventory is quite clumsy, proving far more frustrating than it ought to be. 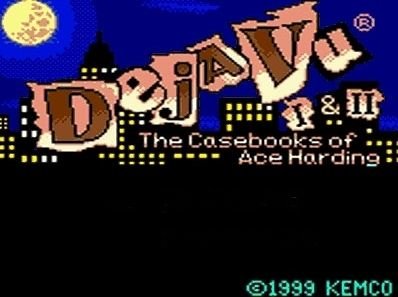 The difficulty of the overall interface is that it's hard to differentiate between items that are just part of the scenery and those that can be interacted with in some way, short of clicking "look" on every single possible object. The game doesn't have any highlighters or a way of informing you what's available, so it's something that you have to work out for yourself. On a system that utilizes a mouse, this isn't such a problem, but when you are operating a handheld control system, it becomes cumbersome and fiddly. It's all too easy to miss relevant clues this way.

Another issue with the control system is how it deals with items that have been collected. Opening up a wallet, for instance, will reveal items inside, but while most adventures accept that you possess such items, Déjà Vu I & II don't. If you don't individually pick the items from the wallet so they end up in the main inventory, then the game doesn't acknowledge that you own them, meaning everything has to be scrutinized with a fine tooth comb. The same is true of doors -- sometimes clicking on them will enable them to open, while other times you will have to click on "open" and then the door for the same effect. Little details like this combine to begin spoiling what is otherwise an entertaining game. However, considering that the game is crammed into such a small space with all this information on screen at any one time, the developers have done an admirable job of trying to fit everything in. Backgrounds are well drawn, if not exactly mind blowing, and are quite colourful in style. Music, on the other hand, is limited to about five irritating tunes throughout both games, and sound effects are only noticeable by their absence.

Puzzles are almost entirely inventory based or involve locating items containing important information in order to progress. While often logical, the puzzles lack variety, as this is pretty much all you do throughout both games, with the exception of a card game which you have to win in the second title. It's also something of a lonely experience -- you never have any conversations and the handful of characters that are available are there either as a threat to your well being (in the form of clichéd gangsters and muggers) or serve a very small purpose such as driving you to your desired location, selling a newspaper, or serving out the cards in Black Jack. The latter is a very strange setup -- in order to ensure a win, you have to give the dealer a specific newspaper clipping to gain his favour. If you don't, you have to be incredibly lucky (much like in real life gambling) and it is possible to run out of cash this way. Should you run out of money, the only viable option left is to wander around the desert (where death is lurking if you stay there for too long) looking for a $20 bill laying around, but as this is a random occurrence, it's possible to never come across it. Although avoidable when you know ahead of time, finding yourself stuck in such a predicament is ridiculously frustrating.

Similar to other early graphic adventures, it is possible to die in these games. Here it's through encounters with various muggers on the streets, along with several other events that can end your game prematurely. There are four encounters with muggers in total, three of which can be counterattacked with the fist icon (interestingly, using your gun results in instant death or arrest), while the latter can be avoided, or failing that, bribed with your cash. Most of the death opportunities are obvious, but should you find yourself pushing up the daisies, continuing the game restarts at the point just before your untimely demise, which cuts down the frustration factor significantly. The threat of death is more prominent in the second title, with the gangster world snapping at your heels; something that is tiresome when you just want to solve a puzzle. Some of the puzzles are also timed, and if not resolved, will result in being caught by one of the gangsters.

Most of the other ways to end the game are fairly self-explanatory: shooting people will lead to an automatic arrest, as will not paying the cab driver. However, others can be a case of trial and error. A nice touch is that however you accidentally end the game, a description of what happens next appears onscreen, which helps to develop the atmosphere. It's almost worth trying out all the possible outcomes to see what the game will tell you. Fortunately, both games can be saved at any point, which is a blessing for any portable adventure.

The redeeming positive among this sea of criticism is that both games are generally intriguing and keep you playing. The plotlines, while simple, are developed by well written text descriptions that give insight into the characters and do an ample job of adding atmosphere to the adventure. Moreso in the first game, clues are unraveled slowly and in a clever way, so at all times you only ever know as much as Ace Harding does, giving you a sense that you really are the Private Detective himself. The second game's storyline doesn't have the same pull as the first, but it still offers an entertaining play through. Overall, Déjà Vu I & II combined will take about eight hours to complete, which might not be the longest adventure on the GameBoy Color, but there's still plenty of gameplay to plough your way through.

While The Casebooks of Ace Harding suffer from a notoriously annoying interface and frustrating death occurrences, the storyline and written descriptions go a long way to make up for it. It's not the best handheld adventure by a long shot, but there's plenty of enjoyable gameplay here to discover if you can tolerate its many foibles.

A relatively enjoyable series that is let down by a frustrating interface. Still, it's another title to add to the small library of GameBoy Color adventures.

GAME INFO Déjá Vu I & II: The Casebooks of Ace Harding is an adventure game by ICOM Simulations released in 1999 for Retro. It has a Illustrated realism style and is played in a First-Person perspective.

What our readers think of Déjà Vu I & II: The Casebooks of Ace Harding 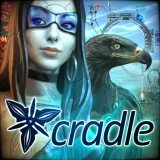