We get a small commission from any books sold.
All Bitmap Books
Written by
Christina Gmiterko — November 21, 2005

The Law & Order games have always been good, entertaining diversions. However, not one to rest on its laurels, Legacy Interactive had larger plans for its next game in the series, and I went into Criminal Intent expecting the best Law & Order game yet. Instead, I ended up with fifteen screens of saved games and a twelve-megabyte error log -- a text file that the game automatically creates and updates every time it runs into a problem. While it's true that this game sports a larger number of locations and characters and more interesting cases to solve than ever before, unfortunately in the end, "Law & Dis-order" may have been a more appropriate title for this release.

While this is the fourth Law & Order game made by Legacy, it is the first to be based on the Criminal Intent spin-off TV series. Basically, this means that the "Order" part of Law & Order has been tossed out the window. As is the case with the television show, the game only focuses on the investigation aspect of the case instead of also playing through courtroom scenes.

In this game, you take on the role of Detective Bobby Goren, and your day starts off as a busy one with three murder cases to solve -- all of which feature several red herrings and interesting stories. A nice feature to the game is that you can switch between cases at any time. So if you get particularly frustrated with a puzzle, you can always take on a different case before having to come back to it. Once all three cases have been solved, a fourth case will reveal itself that ties all of the previous cases together. 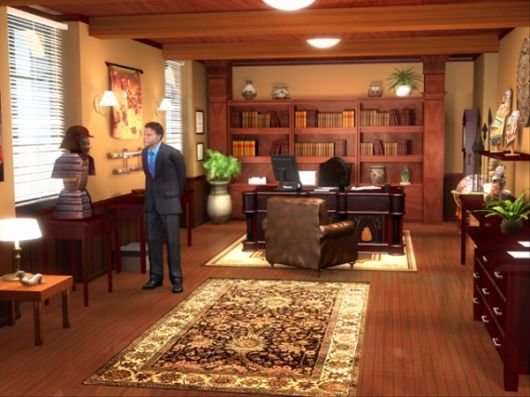 There are three levels of difficulty available -- Novice, Normal, and Expert. The puzzles in novice mode are essentially the same as those in normal, but the player will receive little audio clues to help find the right solution. While playing on expert mode, the puzzles will become a bit more complicated and will contain less obvious hints pointing you in the right direction.

Most of the puzzles are pretty basic, and veteran adventure players shouldn't have much trouble with them, although there are a few here and there that could have you stuck for a bit. Mainly though, your time playing the game will be spent investigating evidence and questioning suspects.

When questioning someone, you have the option of five different emotional approaches: empathetic, complimentary, straightforward, deceptive, and aggressive. However, it is really more of an illusion that you have a choice in how to talk to someone, since there is still only one "correct" way to get a suspect to reveal something. If you continue to use ineffective methods to question someone, a red meter will fill up, and once it has reached its peak, the suspect will refuse to speak to you any further. Really, though, all you have to do is leave that particular location and return so the suspect will begin talking to you again. 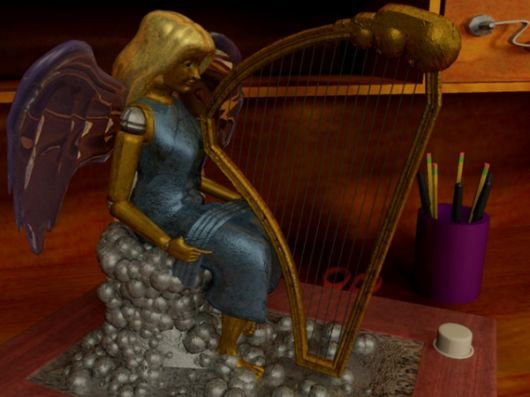 Fans of the TV show will be happy to know that Vincent D'Onofrio and Jamey Sheridan reprise their roles as Detective Goren and Captain Deakins (or at least their voices do). In terms of the voice acting, I think the supporting cast does a pretty good job, but Detective Goren comes off as very dull and monotonous the majority of the time. It's not that his voice doesn't work for the character, but that he doesn't put any tonal differences into his lines. For example, if you want to interrogate someone aggressively, the lines sound exactly the same as if he was using the empathetic tone, only more sinister in their content. It sounded to me that often times the lines were being read without really knowing what the context was for them. While D'Onofrio has a very odd and specific way of playing his character in both voice and mannerisms on the show, the problem is that in the game, unlike on television, you don't have the luxury of seeing facial expressions and detailed characteristics that would help sell his delivery more. Fans of the show will likely understand his portrayal, but non-fans will likely find it to be a poor voice performance, and the medium still doesn't fully excuse the lack of emotional expression.

The area that really separates the game from its predecessors is its interface. Criminal Intent is presented in a third-person view, with you controlling a 3D model of Det. Goren via pointing and clicking. This is something new as far as the Law & Order series is concerned, as the previous titles used a node-based, first-person perspective. This interface change lends itself well to this type of game, and I commend the developers for risking such an experiment when they could just as easily have stayed with their safe, simpler format. Unfortunately, they were less than successful with their more ambitious undertaking, as there is definitely some bad to go along with the good.

At the start of each case, you'll be taken to a crime scene, where you must examine everything that might be relevant to the case. When you click on a hotspot to examine it, you're presented with a mini-menu of icons for further action or analysis. Viewing evidence, documents, and witnesses that you have collected and interviewed is done via your PDA. The PDA is your most important tool in the game, as it displays your evidence and inventory, contains the map used to travel from location to location, and allows you to view your case notes, store phone numbers and receive calls from the lab and research offices. 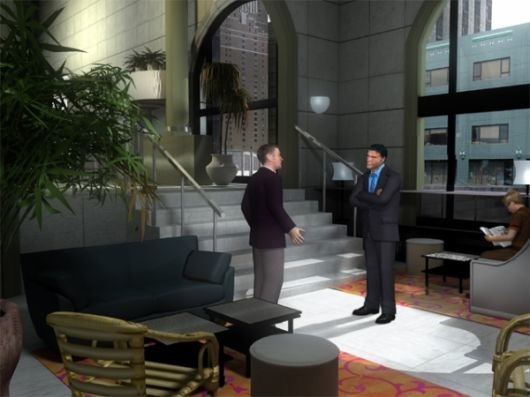 The other tool that you will be using frequently is the criminal profiler, a new addition in the Law & Order games. Its purpose is to help the player build a strong case in order to get permission for search and arrest warrants. This is done by inputting evidence into the system and having the computer analyze it. If an item is deemed pertinent for identifying the perpetrator, it will be added to the profile. For example, if you find a wallet filled with money at the crime scene, the computer will determine that the perpetrator likely knew the victim since robbery wasn't the motive. Once you have filled the profile with enough information, you can have the computer compare it to the suspects you have met, and when you've found a sufficient match, will you be allowed to request a warrant. Although some people may wish this process were less automated, the addition of this feature is a helpful improvement, because in the previous titles, the requirements for obtaining a warrant were vague and more based on guesswork than anything else.

The 2D background graphics of Criminal Intent are well done, though they don't especially stand out when compared to other games of this type. However, despite the decent location graphics, the character models could have been better. With the exception of Detective Goren and Captain Deakins -- who were modeled after the actors that play them -- the rest of the characters look very much the same, with only their clothes, hair, and skin color to differentiate them. It looks as if there were only a few models used to represent the dozens of characters you come across. The characters also look rather blocky at times, and on more than a few occasions while I played, the animations stuttered and repeated themselves, sometimes in an endless loop that could only be remedied by restarting the game.

That was just the first thing in a long string of errors that I ran into with this game. Other bugs indiscriminately popped up as I continued playing, such as inventory items being mislabeled, and descriptions of certain items actually describing a different item. At times the PDA would refuse to minimize (resulting in a restart), and some hotspots would take multiple clicks to get a response. To go along with these relatively small problems were some bigger ones such as Goren walking in the opposite direction of where I clicked, and being forced into yet another restart to get him back on track. Another strange problem was when locations occasionally showed up on the map before I had even found out about them. 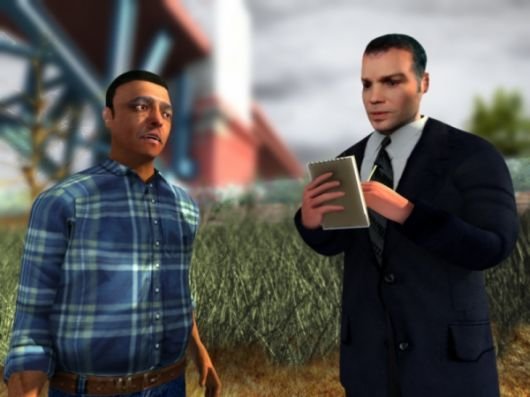 Additionally, while not a bug, the design of the save system left quite a bit to be desired. The game forces you to create a new file each time you save instead of deleting or writing over your previous saves, yet you can name all of your saves the same thing. This is not a big problem, but it definitely becomes more noticeable when you have to save as often as you do in this game.

Even uninstalling the game presented a very odd problem worth mentioning, as it took around ten minutes to complete. Even the most CPU-intensive, hard drive-clogging games I've played before have never taken anywhere near that long.

This review may seem dominated by the game's technical glitches, but since the bugs are so present throughout the game, the attention is warranted. The problems really do detract from the gameplay to a substantial degree, to the point where you may be lucky to play the game for more than twenty minutes without having to restart. The number of bugs a player will run into may vary from system to system, of course. However, I tested the game on two systems, both of which exceed the game's recommended requirements and have all of their drivers up to date, and I experienced various problems on both of them. 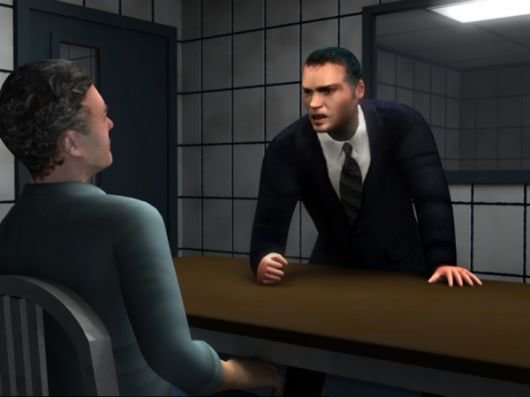 Sadly, these types of errors are indicative of an industry-wide trend of rushing products out the door and onto store shelves. At least most of the problems could have easily been avoided had a little more time (if any) gone into the play testing phase.

The frustrating thing is that beneath all the problems, there is a good game in here somewhere. The storyline and cases are very strong, and without the aforementioned problems, this may very well have been the best game in the series. I can only hope that a patch will be released soon, as Law & Order: Criminal Intent is a game that would-be detectives will want to pick up. Fans of the television series would appreciate it, and adventure gamers looking for a decent detective game would find plenty to like. Minus the bugs, the game would likely earn a solid 3.5 star Adventure Gamers rating. In its current state, however, I can't in good faith recommend this game to anyone without the huge caveat of technical flaws that will discourage all but the most determined investigators.

If the numerous technical problems are fixed, this is definitely a game that would-be detectives will want to pick up. Until then, most players will want to take a pass.

GAME INFO Law & Order: Criminal Intent is an adventure game by Legacy Interactive released in 2005 for . It has a style and is played in a perspective.

What our readers think of Law & Order: Criminal Intent