In 1991, working out of a converted Spokane garage, the Miller brothers Robyn and Rand began a new project called Myst. The results far surpassed expectations from that fairly modest beginning. It introduced thousands to the world of PC gaming, attracted a devoted fan base and grew into one of the most successful franchises of all time. In the years that followed its release, Myst and its sequel, Riven, have sold in excess of 12 million units worldwide. Follow-ups from Presto Studios and Ubi Soft added to the impressive body of work with Exile and Revelation, while the Millers turned their attention to URU, which stood outside the series' narrative framework and got mixed reactions from critics and gamers alike.

When Cyan Worlds announced a return to its roots with Myst V: End of Ages, many gamers were ecstatic, and the hype soared when word surfaced that this game would also be the final Myst game. Sadly, the game's release also marks the end of Cyan as we know it, as the company has recently laid off all but a skeleton team, leaving them severely diminished, if not effectively closed down. And so it's with an appreciative nod to Myst and the dreamers of Cyan that we return the spotlight to Myst V.

Cyan faced a diverse set of challenges when they looked at the design for this game. Rapidly advancing technology favors a graphic construction that takes advantage of all the bells and whistles in today's gaming systems. Myst purists demand brain-twisting puzzles and amazing worlds to explore, while newer casual gamers prefer steady and engaging gameplay, with a minimal risk of game-stopping challenges. Throw in the need to satisfy a fan base dedicated to everything Myst without alienating the many less versed in D'ni lore. Simply put, that's a difficult list of often opposing demands for any developer.

Never one to shy away from challenge, Rand Miller exuberantly promised that Myst V would deliver a game with something for everyone. It's no secret that Cyan scrapped Myst's traditional look that centered on FMV characters and photo-realistic, pre-rendered backgrounds in favor of full 3D. Why? As Rand said at E3, they believed 3D construction and design would enhance and sustain player immersion in the gameplay and environments. 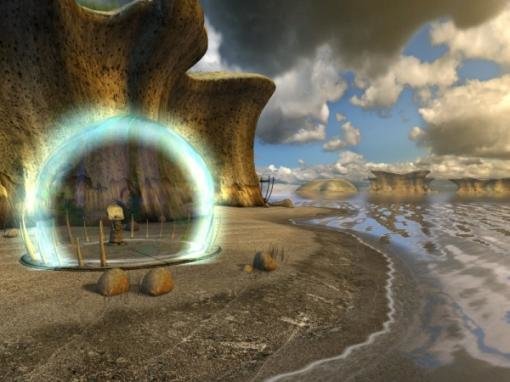 And the game looks good, if not quite photo-realistic. Daytime aspects of the ages have crisply delineated skies and waters. The night views are a bit less detailed, but feature starry skies and shadowy versions of the bright daylight colors. Each age has its own unique architectural elements, artistic style, and organic challenges. The advantages of 3D are nicely exploited, with real-time effects such as day to night transitions and changing weather in a world of many dynamic animations like waving grass and moving seas.

Ambient elements such as sound effects and animated critters have always been an attractive feature of Cyan titles, and Myst V has its share. I ran into all sorts of lively creatures in my trek through the ages, including a rather alarming looking small bird with a razor-toothed overbite in a warlike age known as Laki'ahn.

Those who appreciate in-game music should also be pleased, as Tim Larkin, long associated with Cyan games, composed the game's soundtrack and ambient music. Though a new arrangement of the traditional Myst theme plays in snippets throughout the game, most selections were composed as short signature pieces that accompany cinematics, significant gameplay events and scene transitions. None are looped tracks, so each piece accentuates its gameplay moment and ends when that purpose is served.

After the game loads, you arrive, without explanation, in a large ornate room. A vaulted ceiling enlarges the space, with birds darting across your line of vision only to disappear into the murky recesses. Sounds echo and periodic tremors shake the floor. You are startled by a sudden noise and the fleeting glimpse of something darting behind a nearby column. A quick exploration reveals a locked book and a series of doors surrounding the room. After an unduly difficult search to locate the only way out, you find yourself in the winding corridors of a deserted building. 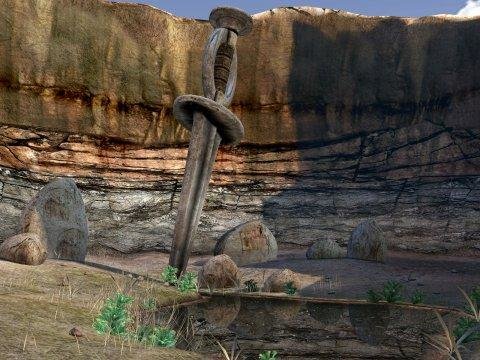 At last you'll discover a familiar sight to anyone who has played a Myst game: an open book on a solitary pedestal -- locked behind some force field. You won't want to touch those moving pages just yet, though, as you have a visitor. More precisely, a holographic construct appears. It is Yeesha, the daughter of Atrus and the last of their clan. This first meeting sets up the game plot and provides its own layer of backstory and typically obscure Myst-like hints.

After your first link, you descend deep into the earth, to the underbelly of an ancient volcano and the long dead D'ni ancestral city. It is here that you will unlock access to the remaining ages, and more importantly, your first writing slate. You will use the nearby linking book to access a central nexus age, called Direbo. It is tranquil, heavily forested, and perpetually night. Soft lighting, fireflies, and the sounds of crickets and night creatures make this a pleasant place. Which is a good thing, because you will spend a great deal of time here, moving from book to book and accessing all the ages once you've unlocked them.

The constant seismic rumbles, the absence of the D'ni, Yeesha's troubling messages, and the edgy encounters with a new character called Esher suggest something is terribly wrong in these worlds. To no one's surprise, whatever is wrong, you are apparently the only one who can fix it. Yeesha and Esher talk to you about the Bahro, the ages, and mysterious tablets or slates. In each age, you must learn the language or signs to write on the slates to command the Bahro, who have the ability to change these ages. You'll also discover that a choice must be made in the future; one that will determine far more than the fate of the Atrus family tree.

Myst games traditionally feature solitary exploration, and for the most part this game is no exception. However, the few characters I encountered were well designed, featuring intricate personalities. Yeesha is represented through a series of holographic images, as well as collectable journal pages strewn along the way. She delivers a narrative version of the written text, which keys the gamer into the backstory and her personal history. She also provides gameplay clues, though this function is an iffy proposition, as Yeesha is cryptically poetic rather than helpful.

Esher is an opinionated and slightly sinister D'ni survivor who is very much alive. Cyan used a combination of motion capture with texture wrapping to achieve realistic facial and body movements and maintain graphical continuity between this character and the game environments. And the attention to detail is more than cosmetic. Professionally vocalized by David Ogden Stiers, an actor best known for his role on MASH, Esher has a vivid and credible personality. You run into him everywhere as he pops in and out via a portable linking book, doling out clues, plot details, and backstory. It is unfortunate that the characters in the game are so limited, but the new modeling techniques, strong dialogues, and voice talent are well utilized here.

The Bahro are sentient creatures that first appeared in URU and play a key role in this story. Ever elusive, they scamper away as you approach, often affording just a glimpse in your periphery. A glance up at the roofline will reveal glowing blue eyes that track you with hidden movements. Despite remaining at arm's length, it is these strange creatures that provide the core organic gameplay element of Myst V, as you must learn to communicate with them through the age-specific slates. 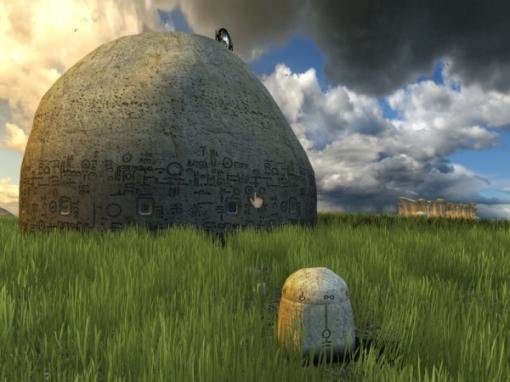 Like its predecessors, Myst V can be played with nothing more than your mouse, though gamers can opt at any time to switch to keyboard control. The former offers the traditional node movement, point & click method with 360-degree panning. The latter, however, offers total freedom of movement, which helps to stay oriented and take in all the details around you. Left clicking the mouse freezes your movement so you can access menu options and in-game devices. The cursor is reactive with the familiar hand grab, use, and look icon configuration.

Normally a pen and hefty pile of paper is a must to face the many hair-pulling challenges in a Myst game. But with the inclusion of two journals found early on, this translates to the least note-intensive Myst game ever. One, in combination with an in-game camera, allows you to add personalized notes and pictures; the latter serving as saved game points, though they are really unnecessary as the game auto saves your progress. The other in-game notebook auto-records the extensive amount of information passed on through Yeesha's holo-recordings, journal entries, and Esher's asides.

What may surprise those familiar with the series are the fewer number of standalone puzzles. There are three basic forms of puzzling in Myst V: practical organic puzzles aimed at gaining access to an age or area, the slate interactions with the Bahro, and a few of the traditional mechanized puzzles more common to Myst games. For example, you cannot search certain lower areas of the old D'ni cavern city until you get air going to those sections. Not that this involves a static standalone machine to puzzle through. Instead, you race the clock to activate a series of switches. This type of puzzle has more in common with URU than Riven. 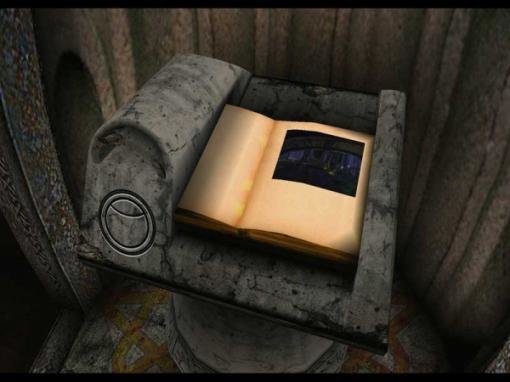 Mastery of the Bahro slates has the potential to immerse you deep into the gameplay, but my progress was initially slowed by the barrier of too many possibilities and not enough clues as to what works or doesn't in a specific age. However, once I started getting the commands right, this ramped up the gameplay. For example, in Laki'ahn, you immediately notice the skeletonized remains of giant creatures strewn about. Their size apparently caused the D'ni to heavily fortify the sole significant structure here, a large castle-like complex. Working in and around these fortifications is a primary challenge that requires the Bahro to overcome. Dealing with the slates also creates a sub-set of strategy challenges, as you wouldn't likely be able to scale a rope ladder or use levers and devices while carrying a hefty rock slate.

With a doggedly protective fan base, a mountain of hype, and the undeniable pressure of being the last of its kind, Myst V: End of Ages has a tall order to fulfill in many gamers' minds. But can any game achieve the lofty goal of being an everyman's game? Probably not. But this early look at Myst V promises a little something for everyone. The real-time 3D worlds, general ambiance, and high-end graphics create a sensory experience worth exploring, and a free roaming interface makes it all so accessible. Though it stays faithful in spirit to the solitary, peaceful exploration and puzzling of prior games, the gameplay emphasis on innovative exchanges with the Bahro adds a unique twist that makes you the co-creator of events in this game. All of these design choices have the potential to make this game the most dynamic and immersive of the series when it releases on September 20th.