"It's a fitting ending," Myst co-creator Rand Miller proclaimed during our presentation at E3. Now over ten years after the release of the original Myst and millions of copies sold later, Myst V: End of Ages will close the book on the family saga of Atrus and his offspring.

Myst V is to be the last release in the legendary gaming series that has caused reactions ranging from unbridled admiration to venomous scorn. No matter which side of the fence you are on, however, one has to appreciate what the series has been able to accomplish over the years; accomplishments that every game developer dreams of, but few achieve. Now it is time to wrap it up, and for the creators at Cyan to move on to new projects.

The Myst series, beyond all of its puzzles, has always had a strong dramatic underlying story and End of Ages promises to continue to chronicle the struggles of Atrus' family and explore the mysteries of the D'ni civilization. Details of the plot in general at this point are being kept quiet. However, many questions left unanswered in the previous installments will be answered here, and the ultimate fates of the characters will be decided. 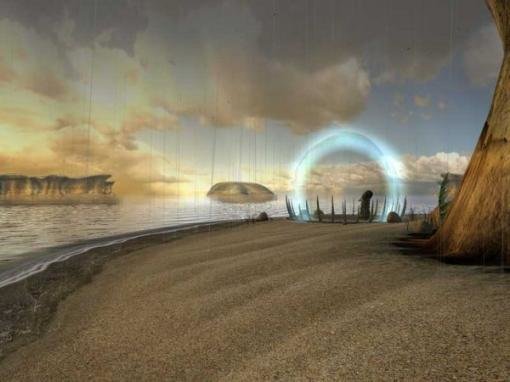 If details on the plot were lacking, the visuals that were presented to us more than made up for it. The game has left behind the slide show format of the original Myst, as well as the node-based adventuring of Riven, Exile and Revelation, and is instead fully 3D along the lines of Uru and realMyst. In fact, it uses an updated version of the engine used for Uru which not only adds graphical improvements, but is also said to be less taxing on players' systems overall.

In the scenes that we were shown, everything looked fantastic. At every turn the environments were rich and beautiful. Myst V definitely lives up to the graphical standards set by the previous games in the series. The newer technology even benefits the scenic atmosphere with real-time physics effects such as grass being blown by the wind all around you, and other small details that add to the overall immersion in the game.

However, in order to get this amazing dynamic world, a sacrifice had to be made. The FMV (full motion video) acting is gone, replaced by real time 3D characters to go along with the three-dimensional world. The reasoning for this is that real people would stand out like a sore thumb against a fully 3D background. Now, I'm actually a fan of FMV. I've always found it easier to attach myself to real actors (no matter how bad some of the acting may or may not be) than to 3D characters (that have never been able to match even the worst actors in performance anyway). With so few FMV games being made nowadays, I was very disappointed to hear that Myst would be leaving the format behind as well. The fact that the new animated characters look great helped soften the blow, however. The facial expressions are the most life-like I have seen from any adventure game by far. This realism is due to the developers integrating a new technique into the character modeling process. They filmed real actors' performances and applied them to the 3D character models, and as a result, obtained 3D characters with motion-captured facial depictions of those actors.

One of the elements carrying over from Revelation will be the reference journal in which all of your conversations are logged, and any pictures that you snap in the game will be stored there for future reference. In addition to that, the pictures that you take act as save points in the game. There will never be any need to save your progress during the game as it is automatically done for you every time you snap a picture. Which, with the amount of puzzles, symbols, and other pieces of important information you will want to have a picture of to reference easily, I'm sure you will be doing frequently. 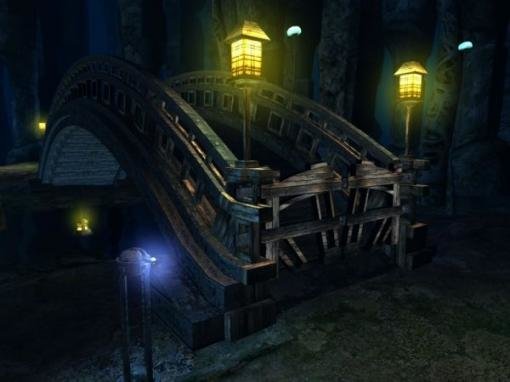 While not forsaking the many puzzles the Myst series is renowned for, End of Ages will emphasize exploration more than we've seen in the past. The goal is for gamers to spend less time hitting walls with certain puzzles than they have in the previous installments. This way, the exploration and story elements won't ever (hopefully) come to a standstill.

We were shown an example of how the puzzles are a more natural part of the world around you, and how solving the puzzles themselves can sometimes change the world and foster further exploration. Strange creatures that have the ability to make changes to the world -- such as influencing the weather -- inhabit one of the environments you will be exploring. You will need their help in order to overcome certain obstacles, but a problem arises because you have no way of communicating with them. So you must learn their language and write down on a slate in the game what you would like the creatures to do. If what you write is understandable to them, they will carry out your instructions.

Despite the fact that several major design changes have been made to make the game more accessible to new players, Cyan has no intention of leaving their base audience behind. It's a fine line between trying to make everyone happy and still keeping with what you originally intended the game to be, and the developers are well aware of that balance. To try bridging that gap, Cyan has given the player the ability to choose how they would like to explore the game. For those that are accustomed to direct control, you can navigate freely throughout the worlds with a combination of keyboard and mouse -- it's total freedom of movement. Anywhere you want to go, you can. But for those that are comfortable with only the mouse, you can simply point and click a location on the screen and you will move there -- no different than any other traditional point & click adventure.

From what we saw, the game looks completely worthy of the Myst legacy. Whether Cyan can win over both new and old fans alike, only time will tell. The one thing that is certain is that the game will be what Rand Miller calls "a Myst ending" to an unforgettable series. It may be the End of Ages, but also a new beginning for what lies beyond.