This time last year, Adventure Gamers was eagerly previewing a game called Fahrenheit after seeing it demonstrated for the first time at E3. Since then, news about the game has alternated between relatively quiet to turbulent, as the biggest stories centered on delays and the change of publisher and title. As a result, at E3 '05 we found ourselves at Atari, watching a demonstration of Indigo Prophecy (the game's new North American title). Yet while the name and faces may have changed, our excitement about this wildly innovative adventure remains unabated.

The game's developer, Quantic Dream, has been breaking new ground since its inception in 1997. The company's first game, Omikron: The Nomad Soul -- perhaps best known for featuring the vocal talents of David Bowie -- earned praise for its fresh approach to genre-blended gaming. As with many innovative titles, however, it offered something of an uneven gameplay experience. In 2000, Quantic set out to push the limits of both technical and creative boundaries once more.

Again scrapping the traditional model of adventure games, the developers created a brand new interface to facilitate a more interactive narrative technique, and designed an original story that evolves as decisions are made in the game. To add a final flourish, the full capabilities of their state-of-the-art motion capture studio have been employed in the production. But while Indigo Prophecy breaks the standard conventions of the genre, it adheres to the heart of adventure gaming, for the core strength remains its characters and story. And a dark tale it is, too.

It is cold in New York City; freezing, in fact. As the temperature drops, the city is traumatized by a series of unexplained and brutally violent murders. What is more bizarre is that although the style of the crimes is identical, the killers are as varied as the victims. Without warning, perfectly ordinary people are killing absolute strangers in highly public areas. The game opens as Lucas Kane -- the first of four playable characters -- sits in a closed stall in a public bathroom. An unknown man enters and washes up at the sink. Moving hypnotically, Kane emerges to butcher this total stranger in the middle of the bathroom floor. Covered in blood, Lucas regains control and awareness, but with no idea why he killed this man. He is overwhelmed by what he has done, but there is little time for remorse. He has to act and act quickly -- first to escape the bathroom, and ultimately the narrowing police net that closes around him while he searches to uncover the greater problem that has thrown the city into this series of murderous impulses. Close on his heels are two of New York's finest, detectives Carla Valenti and Tyler Miles. Meanwhile, Lucas reaches out to the only ally he can trust, his brother Marcus Kane, a priest. The story tracks the movements and actions of these four playable characters as they work towards solving the mystery behind these frightening events. 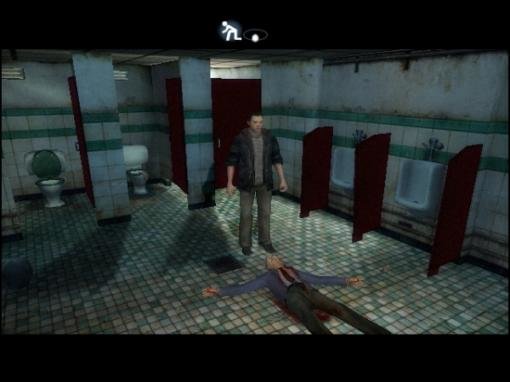 The narrative engages you immediately due to several unique design decisions. A key component is the elastic plot that evolves as the game is played. Quantic's expressed goal is to present a world where a powerful connection is created between the player and the action on-screen, where every turn and every micro-decision has serious consequences.

By "every turn", they mean it. Indigo Prophecy is a largely non-linear game where the playable characters are subtly shaped by events and choices. Even the multitude of NPCs you encounter demonstrate a (simulated) AI as the game progresses. The demo we saw focused on just one scene, but though we played for fifteen minutes, it felt like we had barely scratched the surface of possible alternatives for that single location.

As Lucas stands over the dead body of his victim with a bloody knife in his hand, he clearly has vital decisions to make. He has an unfinished meal sitting at a table outside, along with a check to pay. To make things worse, there is a cop sitting at the counter, nursing a cup of coffee. Quick thinking and decisive action are very important, but the choice is yours. You can pay for your meal quietly and slip away largely unnoticed. You could also run out of there like a man on fire, covered in blood, your victim laying in full view. Or you could pick some alternative somewhere in between. The point is that you can do any one or combination of multiple actions. What you choose determines the next branch in the story and the choices left to the other playable characters when you assume control of them. For example, if you opt to slide out cleanly from the diner, the two detectives will arrive and have to start from scratch in piecing together what happened and who the suspects are. Run out covered in blood and you'll have a mad dash through the streets with cops looking for you at every turn.

When making these choices, what you will see on your screen is a series of action icons at the top. When an interactive item is encountered, a choice of actions will appear at the top. You can cycle through them and select the one highlighted at the top at any time. Glance down at the bottom of the screen and you will see a sort of health bar. This device shows your character's mental health or comfort level. Let that bar drop too far south and your character is bottom-feeding in their mental basement, and they won't act the way you want or as quickly as they should. Drive it down for too long and they might give up on the mystery or even commit suicide. This is all part of the powerful connection Quantic has created between the player and the game. 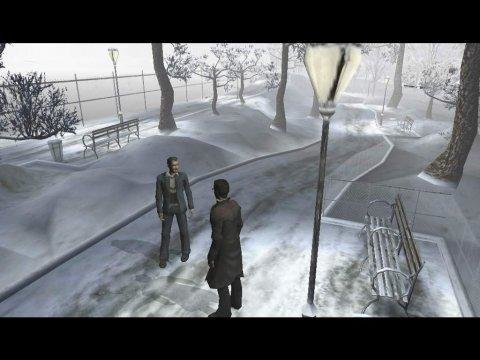 Indigo Prophecy was being shown on an arcade machine at E3, and clearly this is no mouse-driven, by-the-numbers experience here. The standard inventory is missing as well. Instead, usable items automatically become "concept icons". By selecting the appropriate icon, you use an item as you need it rather than stashing them in a bottomless bag. How you use them is intuitive and lifelike.

We played the console version of the game using a standard gamepad, and it's still unclear exactly how the PC control scheme will be handled. What we do know is that the movement and actions of the main character will follow the player's input in two ways. One way is called the Motion Physical Action Reaction (MPAR) interface, which allows the player to simulate the same movement as his character on screen, creating what Quantic thinks will be a physical identification between the player and character. Then there's the Physical Action Reaction (PAR) interface, which is used during mini-game action sequences, where the player has to move the controls in the proper direction in order to succeed.

We did not get to play through any action events during our time with Atari, unfortunately, but people should be aware that Quantic did not hold back creatively on any element that would enhance the drama and thrilling atmosphere of this game. This means there will be action events, and more of them if you choose confrontational routes through the game over stealthier options. Indigo Prophecy is meant to immerse, engage, and provide a dramatic feeling to the gameplay, rather than play out like a chess match.

The gameplay doesn't stand alone as the only noteworthy aspect of Indigo Prophecy. The game features real-time 3D graphics, and wide open environments, allowing for free exploration and unlimited movement within the scope of the game. The graphics are some of the most dynamic I have seen, with the use of split screens, multiple camera views, and player ability to independently manage camera angles. The split screen device is just one example of the meticulous care given to every aspect of this production. By periodically showing the movements of other characters in relation to your own, the tension of the scene is taken to a whole new level and a sense of urgency is created without a single timer being employed. Throw in the well-chosen and skillfully directed voice talent, along with content-oriented musical score, and you've got another layer added to an engrossing storyline.

It remains to be seen if the lofty ambitions of Indigo Prophecy can match the great expectations of its potential. For now, the only thing truly certain is that the game is destined to break boundaries and conventions as it seeks to create its own identity. From everything we saw, heard, and played at E3, however, we're more excited than ever for the expected September release date.