We get a small commission from any books sold.
All Bitmap Books
Written by
Ben "Yahtzee" Croshaw — March 6, 2005

So, what would you do if a total stranger in a bar asked you to do a job you can’t do in a place you’ve never heard of, isolated in the middle of hostile territory? Grab the opportunity with both hands, apparently.

Enclosure, by Femo Duo Entertainment, is, to my knowledge, the only amateur AGI game we’ve reviewed thus far on Adventure Gamers (AGI being the 16-colour CGA low-resolution adventure game system that Sierra churned a hundred million games out of before technology marched on). It’s been out for a while, but I feel it deserves some coverage, because it is easily as good as, if not better than, Sierra’s commercial products of the same engine.

You play Mike Goodman, who, together with his girlfriend Sarah, form the most sickeningly affectionate couple this side of a Mills & Boon novel, and who pretend to be psychics to con the pensions out of gullible old ladies. After a job goes awry, Mike is overheard whinging in the local bar by a wealthy businessman who, mistaking him for a genuine psychic, invites Mike and Sarah to join a group of paranormal experts to investigate weird goings-on at his Antarctic research station. So, you and a bunch of colourful characters arrive at the complex in the middle of a howling blizzard and set out to bust some ghosts, wondering how effective this research station is when it only has one small laboratory. 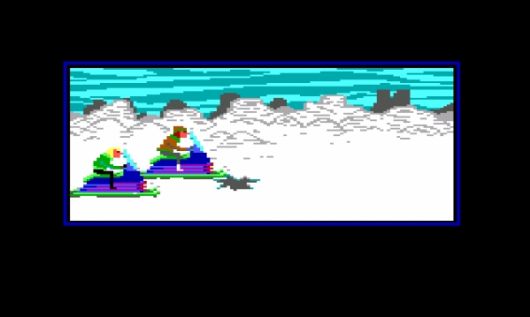 Basically it all plays like a game version of John Carpenter’s The Thing (an acknowledged influence), but without the aliens or the tummies that bite off people’s hands.

It has to be said that Mike Goodman is a bit of a jerk. Quite aside from the fact that he’s a conman, he also gets on my nerves by making saccharine lovey-dovey conversation with his girlfriend. It’s like watching couples kissing in the middle of the street when you’re single. When he converses with the other characters, he has the attitude of a yappy little puppy clamouring around their ankles for attention. Oh yes, and there’s one bit where he openly announces to the player that he intends to comfort his distressed lady friend purely because he hopes he can get his end away in the process. 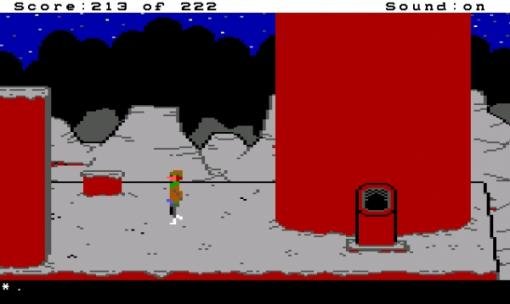 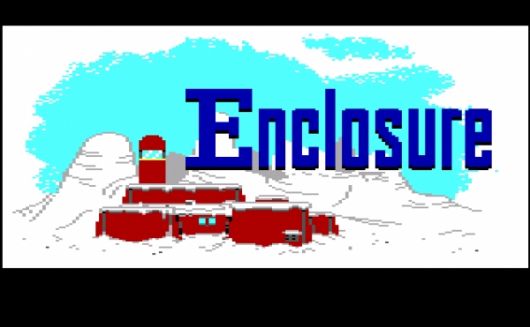 Pacing throughout the game is excellent--in fact, I’d call it the strongest feature. The initial few days are slow and safe as you get to know the location and your new friends. Then odd and inexplicable things start to occur, and by the end of the game bodies are turning up left and right, and you can’t turn a corner without finding another aspect of the station degrading into chaos and horror. The tinny bips and beeps and blips of AGI are used effectively to produce haunting, ominous melodies to coincide with your unsettling discoveries. There are moments in the game where bizarre but passive occurrences add to the growing sense of tension, and others where all that tension is released at once in sudden frights. It’s a testament to the game’s design that, although AGI graphics seem somewhat laughable by today’s standards, Enclosure can still give you the wibblies.

Another of the game’s strengths is the characterisation. What with being trapped in a small environment together, you’ll have a lot of time to get to know your fellow inmates, all of whom are well-rounded characters with their own agendas. The fact that your character is a con artist creates additional tension; you have to wonder if the other characters will figure out your secret, on top of worrying about when the ghost will pop up next.

Graphics are about as good as you can get with AGI, and I mean that in the nicest possible way. Animations are smooth, and few corners are cut. Speaking personally, I know I wouldn’t have bothered to create a ‘getting out of bed’ animation when merely jumping straight out would have sufficed, so the developers get a gold star for that. The one criticism I have in this topic is that, in the snowfield areas, it is sometimes difficult to tell what can be walked on and what can’t, but that’s a very minor niggle.

Difficulty-wise, this one probably won’t be keeping you up at night, since most of the game is based on the ‘walking around and talking to people to unlock the next bit’ system so beloved of Japanese visual novels and RPGs, and the puzzles are relatively straightforward and obvious. Even if you do find yourself stuck like a limpet in a glue factory, there’s an in-game hint system that can cleverly detect when you’re having trouble and deliver a cryptic note to point you in the right direction. The parser is well put together, and there are few ‘what word am I thinking of’ moments. There are one or two minor frustrations, such as being inexplicably powerless to open a cupboard in the garage, and your character being unable to acknowledge the existence of a crowbar until he’s standing right on top of it. The game could also do with a method to skip the jet sledding arcade sequence, because that is very annoying, especially when another character keeps getting in the way and unwittingly shoving me into ice holes. Oh, and after I found one of the inmates murdered, my avatar was still greeting his colleagues with pleasant banalities while I was jumping up and down in fury urging him to tell everyone about the bloodstained corpse in the next room. 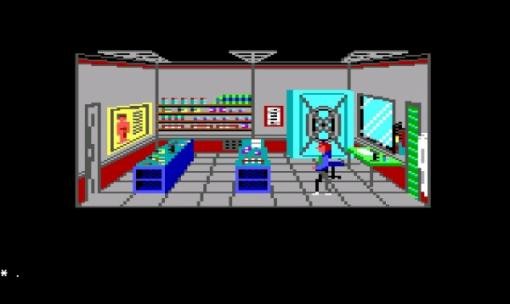 While we’re on the subject, I found myself wondering what it was about the game’s dialogue that got on my nerves most of the time, and it was on the second play through that I realised... In almost every line of speech, the speaking character says the name of the person they’re addressing. “How’re you doing, Mike?” “Not so bad, Frank.” “Boy, this place is weird, isn’t it, Mike?” “It sure is, Frank.” It gets very old very fast. Also, the occasional sprinkling of wacky humour--including some rather silly death sequences--does seem a little out of place in an otherwise dark, unsettling experience. It all smacks of trying to have your cake and eat it, although I’ve never understood that phrase. I don’t know what else you could do with a cake. Hold doors open, maybe.

But my biggest criticism I have reserved for the very end, and not coincidentally, concerns the game’s ending. The conclusion to what had been a very intriguing mystery story left me deeply, deeply disappointed, because it made almost every cool and inexplicable occurrence that happened throughout the game irrelevant. I’m trying very hard not to spoil it here, because I really want you to play the game and see it for yourself, but we’re talking a very ham-fisted twist ending. It’s like the developers tried to switch genre five minutes from the end. A particularly good episode of the X-Files transformed suddenly into a particularly bad episode of Scooby Doo.

Despite all that, there is nothing preventing Enclosure from getting under your skin for an afternoon, and I can almost guarantee that you won’t be able to stop yourself until you’ve unravelled the mystery. For all its flaws, Enclosure is a truly excellent freeware adventure that seems to embody the argument that you don’t need 3D accelerated graphics with dynamic lighting and all the bells and whistles to create an experience that is genuinely engrossing and fun. If it had just had a little bit more polishing it would probably have been one of the strongest titles in recent years. Well worth an hour or two of your time. Not for the faint of heart.

What our readers think of Enclosure