I smelled trouble. Big trouble. I hadn't been in Wheaton City long, but was learning fast what a cesspool of depravity the place really was. It's a great spot for a private eye, but a lousy place to call home. I'd heard that business was good, and it is. I'll say one thing for this lousy prohibition... there's no shortage of crime when honesty doesn't pay. The cops are more crooked than the criminals, and there's always work for a gumshoe who can get the job done. A few bucks per case in a town this corrupt will keep me busy a long, long time.

Already there's been a murder at the local speakeasy, and the mob connections are too hot for police. They want to put my neck on the line instead of theirs. Right. Or I can look into the ritual killing of the Dantino gang. Word on the street says it's secret society. A bit much to swallow, but stranger things have happened, I guess. But first I promised a favour--a simple case of a missing accountant uptown. This one's on the house, but it'll shake off the rust and get me back into the game. Time to head online...

Yes, you read right: online. I suppose I need to slip out of my hard-boiled P.I. persona for a moment to tell you more about Gumshoe Online, an Internet adventure made for fans of detective mysteries with a little noir flavouring. Actually, it's not just one adventure, but an episodic collection of individual cases, each of which can be purchased separately and played as a standalone experience. 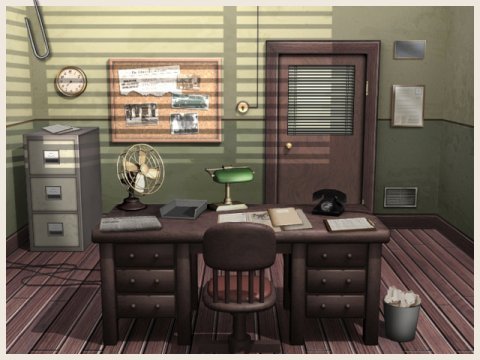 If you haven't heard much about Gumshoe, that's really no surprise. An independent production, developed by newcomers Hiding Buffalo, the game was launched to relatively little fanfare earlier this year, with a free tutorial and one case available for purchase. Since GO's inception, the second full case has been released, with plenty more expected on the way. There is no physical product to buy, and no download necessary, as the game is played entirely in standard browsers. Registration for the tutorial is easy, and available to all with no obligation involved. Even better, access to the game is available from any computer, as only your log-in is essential (not that I'm even remotely hinting you might want to squeeze in a few minutes at work or anything--ahem). Case purchases are all done through the website (and in-game, no less), so the process is completely painless, and will have wannabe sleuths up and detecting in mere minutes.

It's tempting to suggest that Gumshoe Online is aimed at the increasingly sought-after "casual gamer", but that would be misleading. Or more to the point, if it is aimed at that elusive demographic, it doesn't compromise on its gameplay elements to entice those gamers like other titles have done--most notably, the much higher-profile BeTrapped. Where that game melded adventure elements with repetitive puzzle-based gameplay, GO is 100% adventure from top to bottom, start to finish, and you either take it or leave it on those terms. Whether that philosophy can be successful, and whether the game will be good enough to garner popular interest, still remains to be seen.

The backdrop for the cases is the violent, crime-ridden Wheaton City in 1930s America. After assigning a name to your character, you'll assume the role of a (male) detective, and select one of the available cases to investigate. Gumshoe's gameplay is ultra-basic point & click fare, and the interface simple and effective. Point your cursor over an object, and a description will pop up to describe it. If the item is interactive, a single click will carry out whatever actions are possible, including the use of applicable inventory items. As you discover evidence, information is automatically added to your notebook, which is easily accessible for reference at all times. Moving between locations can be done at any time by calling up an overhead map. Everything easy, neat, and clean. 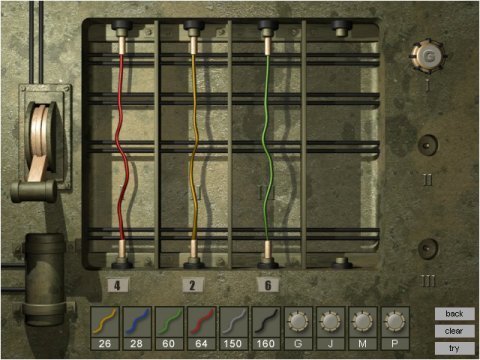 Due to the online nature of the game, and not to discourage those with dial-up connections, Gumshoe is a no-frills production, to say the least. The graphics are quite simplistic, typically displayed in a 3/4 overhead, isometric window. Eye candy it's not, but the visual presentation is certainly serviceable for the game's intended purpose. Strangely, there is no sound at all, except for a single effect when a notable clue has been identified. The silence feels a little disconcerting at first, so I hope the developers decide to address this issue in future. Still, even without, it's not long before you've set that aside and are digging into the adventure.

You'll want to converse with the characters you meet, and the dialogue system represents one of the game's clever features. Being a nosy detective, you'll find that people have only a certain degree of patience for your intrusive questions. This tolerance level is depicted by a visible bar, so you can measure the effectiveness of your choices. Ask too many pushy questions before they're ready, and they'll become completely uncooperative, so it's best to go slow and strategize your conversations. 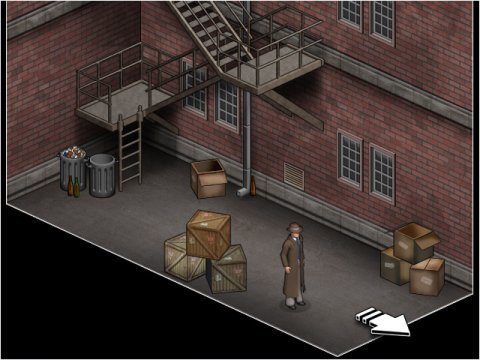 There is a variety of logic puzzles in any given episode, so in addition to piecing together the clues of your investigation, you'll also find yourself picking locks by aligning tumblers, connecting electrical wiring, assembling interconnecting cogs, solving anagrams, and breaking codes for safecracking, to name but a few. Although nothing new to experienced adventure gamers, these puzzles can be quite challenging, so don't expect to breeze through without breaking a mental sweat.

Ultimately, of course, the goal is to identify the culprit from a range of suspects, and proving your case is no easy task. There are all kinds of red herring clues to throw you off track, and in order to successfully solve the case, you'll need to formulate your theory, and correctly present the relevant clues in order of importance. I suspect some players will find this requirement to be a little too rigid, as there's no feedback at all to what you may have wrong. If you fail, there is no way to restore, forcing you to replay the entire scenario from the beginning. Fortunately, the developers have promised to implement a manual save feature in the near future (rather than the existing auto-save upon exit), so that addition may bypass the current endgame frustration. Still, a properly implemented feedback system would be something I'd prefer to see the developers offer in upcoming cases. Failure is not an ending that motivates many gamers.

The other potentially objectionable issue is the timed nature of the cases. Each case has a fixed time limit, and an onscreen clock displays how much (or little) time is remaining. The clock does not count down in real time, as it's based on the number of times you change locations, but the sense of urgency still undermines the relaxed nature of the gameplay. In a game of thorough investigation and exploration, such an arbitrary challenge feels more like a punishment than a benefit. If you get stuck--and you will--you're locked into revisiting every location room by room, and the clock becomes an unavoidable nemesis working against you. Again, the addition of a save system may help to eliminate this frustration, but I wouldn't be surprised if fan feedback caused the developers to eliminate the clock altogether--or at least make it optional. 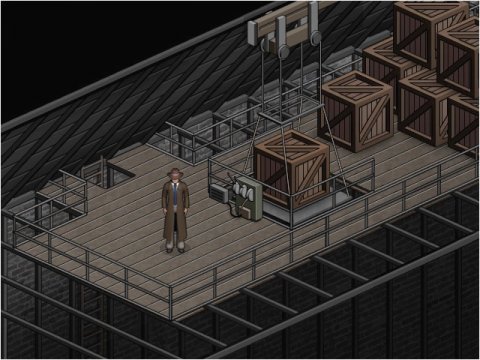 When playing the game, you'll definitely want to set your screen resolution to 1024 x 768, as otherwise parts of the menu (including the cursed clock) will be partially hidden from view (although for the clock, maybe that's a good thing). The other imperative issue is the need to disable any pop-up blocker you may use, as that will prevent the notepad window from displaying. At this early stage of the game's existence, you may yet encounter some technical issues, as well. Using Internet Explorer, the movement of my character was perpetually choppy, which had nothing to do with my (DSL) connection speed, as I experienced no such difficulty using Firefox. I also found some of the loading times to be inordinately long, including simple dialogue texts the first time I encountered NPC's. None of these issues are showstoppers, and the developers seem committed to addressing any issues that arise, but be forewarned that such difficulties might exist. Fortunately, the free tutorial will let you test for browser compatibility, and give you a feel for the gameplay, though on a much simpler level than the real cases.

In addition to these larger issues related to the overall Gumshoe Online experience, the individual cases currently available also have a few relevant flaws that mar the experience somewhat. Pixel hunting rears its ugly head on occasion, and there are a few fairly significant consistency errors (such as the notebook registering a murder long before I had any reason to believe one occurred). The basic case plots are decent, but the writing is weak, as dialogue options feel unnatural, and I never felt absorbed in the stories. Making matters worse, despite the numerous locations you'll open up in the course of your investigations, gameplay can come to a screechingly linear halt if you don't find the exact triggers needed to move on, even if they have no immediate relevance to the story.

Despite these weaknesses, there are several hours of adventuring entertainment offered by the first cases of Gumshoe. At £2.99 per episode, the playtime certainly offers decent value for your money, and the episodes may just fill a diversionary gaming need between more substantial offerings.

It wouldn't be fair to grade the game based only on impressions of the first few cases. Not only might future episodes vary drastically in quality, but the developers are continuing to improve the basic framework in commendable ways. What I can do at this stage is simply point the way, and recommend you try the tutorial for yourself, at the very least. Gumshoe Online is still very much a work in progress, but its potential is certainly evident. The market is out there, and I hope to see Hiding Buffalo continue to develop and refine both the presentation and the implementation of future cases. With the experience gained from these humble beginnings, this could very well be a series to keep an eye on in future.

What our readers think of Gumshoe Online