We get a small commission from any books sold.
All Bitmap Books
Written by
Dan Ravipinto — April 29, 2004

The sun god's response was clear, final, and without hope of reversal: either a great obelisk would be built to his honor before the season of Shemu and Ramses would live and rule for years to come, or it would not, and all of Egypt would fall with her Pharaoh...

The Egyptian Prophecy begins with Kaemouaset, son of Ramses II and a priest of the god Ptah, sitting in the great temple of Amon-Re at Pi-Ramses. He writes elegant characters upon a sheet of papyrus as the rising sun fills the chambers of the sun god's home on earth. His writings tell the tale of Maya, a magician, sent by the Pharaoh to oversee the raising of the obelisk that, through Amon-Re's blessing, could lengthen his life.

As Maya, the player soon finds that a dark power is at work -- a curse of some sort has been placed upon the temple and all those who work towards the obelisk's completion. Soon, accidents are occurring throughout the site. A massive stone falls upon Paser, the temple's architect and the only person with the secret knowledge necessary to complete the project. Wounded almost to the point of death, he begs Maya to investigate and discover who is behind the dark magics which are obviously at work. 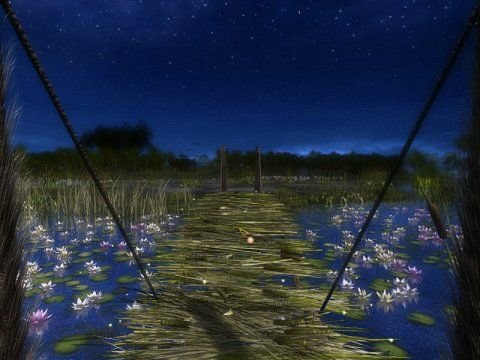 From the very beginning, the sheer amount of research that went into The Egyptian Prophecy is obvious. By the end of the story, I found myself familiar with a broad set of ancient Egyptian myths and beliefs, all of which were integral either to the plot or the puzzles. The background colors every aspect of the game, from the beautiful opening screens and FMV introduction to the game's inventory: an image of the goddess Isis spreading her wings to reveal the objects currently held by the player. Even better - the program contains an online encyclopedia of Egyptian legends and history that can be consulted at any time.

The game does an excellent job of setting up the story and giving the player a set of clear, immediate goals. The first, obviously, is to investigate the temple for some evidence of foul play. As Maya continues her investigations, though, she uncovers a plot that will take her along the Nile to Aswan and Memphis, and eventually to the realms of the gods themselves.

Each location is presented as a 360-degree panorama. The interface is simple and clear-cut -- moving the cursor allows a view in all directions, left-clicking performs movement and interaction with the environment and right clicking brings up the inventory. The inventory menu only allows you to more closely examine the objects you've found, or use them on a hotspot. 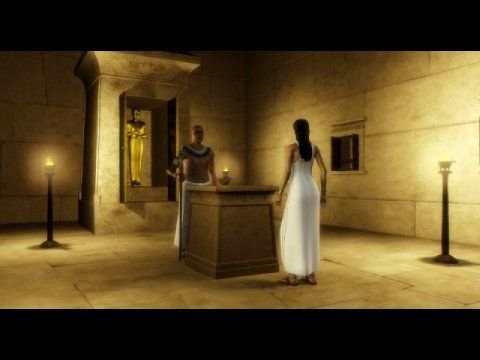 Pi-Ramses and the other places Maya travels to in the course of her adventure are wonderfully detailed, visually and aurally. The sound of workers chipping at stone echoes amongst the elegantly curved pillars of the temple of Amon-Re as torches flicker and the wind gently blows. In Memphis, water laps against the sides of a stone pool and in the underground realm of Ptah lava bubbles from the ground.

Music, for the most part, is limited to one or two themes. These pieces are, however, beautiful examples of symphonic music that directly connect to the gameplay. The first plays when the player has moved forward in solving the mystery, the second when danger lurks. Both pieces are dynamic, with the 'danger' theme rising in volume and tempo as things become more dire.

The lands Maya visits are, for the most part, devoid of life. There are only a few characters that Maya can directly interact with: Paser and a few of the workers at the temple, the aforementioned Kaemouaset, Tuya the healer and her husband Ouni, who oversees the quarry from which the obelisk is to be extracted. Beyond some brief conversations with the gods themselves, they represent nearly all of the character interaction in the game. 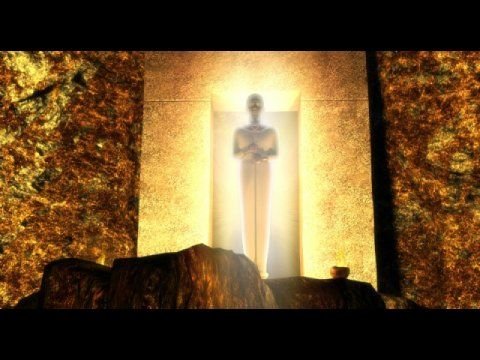 When speaking to a character, a small menu of four choices is shown. These generally each lead to three or four more options, as well as a choice to return to the previous menu. While the conversation choices are limited (and, as is often the case, the best course of action is to simply try every conversation option), they do change within the game's context, so that when Maya makes a new discovery she can mention it to any of the other characters.

The voice acting is solid, if unremarkable. No attempt is made to lip-synch the voiceovers to the character animations, which can be a little disconcerting. Also, Maya has a tendency to repeat herself -- the greeting she gives almost every character in the game is the same sound clip looped again and again.

The way Maya herself is presented visually is rather odd. While she seems as an interesting, independent character, when she appears in the game's various cut scenes she's shown wearing a rather, well...skimpy outfit. Considering how seriously she's portrayed by her voice actor, it seems somewhat out of character. 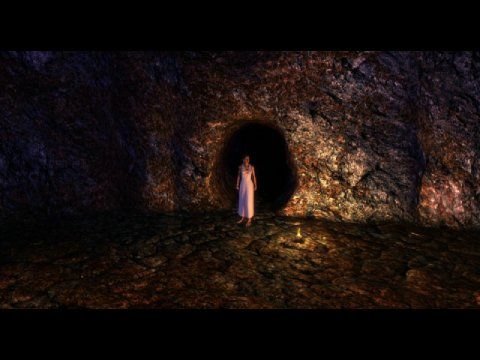 The Egyptian Prophecy is broken up into ten chapters, each one self-contained within a specific location. The game is completely linear and it is impossible to miss an object from a previous chapter that would be important in a future one. While this is helpful, it does minimize the feeling of freedom, as each area is generally small.

Even though the story begins with Maya's investigation of the accidents that have occurred, it soon becomes apparent that the actual gameplay of The Egyptian Prophecy is far more pedestrian, much to my disappointment. The challenges Maya faces generally follow one of three patterns: classic object manipulation, casting spells, and logic puzzles. For the most part they are all well-cued and logical, and I was able to complete the entire game without resorting to a walkthrough. The spells in the game are utilized much like objects. Maya starts with only one ability - Clairvoyance - and learns more as she goes along.

There are problems, however. One of the worst involves the game's interface regarding object hotspots. When the mouse is hovered over a directional hotspot, the cursor responds immediately by glowing. When hovered over a useable object, however, there's a slight delay as an animation indicates whether it can be examined, used, or picked up. Because of it this, there were several cases where I was certain there was not a way to interact with an object when in fact there was. 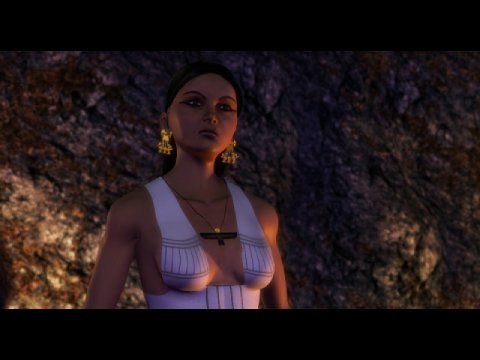 In the name of realism, the locations are full of non-interactive objects. In Tuya's home, for example, there are stacks of papyrus and wood scattered about. But when it becomes necessary to write down a formula, or light a fire, however, there is only one particular piece of papyrus or wood that is useable. Combined with the slow object interface, this can become a severe annoyance. It seems the creators must have had some idea of this issue, as there are several cases where the camera will spin around to an object on the ground and Maya will comment on its being useable.

While the puzzles are all logical, I can't say that I was overly impressed with the majority of them. Rather than supporting the interesting opening with research and investigative game play, the puzzles soon fall into a pattern of tricking recalcitrant NPCs into helping your character, even though she is a direct envoy of the Pharaoh himself. While this makes more sense when dealing with higher powers, it still becomes an obvious ploy to stretch out what in reality is a very brief and narrow storyline.

Many of the logic puzzles are old wine in new bottles, classic conundrums given an Egyptian twist, such as a sliding block puzzle whose solution displays the cartouche-name of Ramses. The worst offender of these is a direct copy of the old "cannibals and missionaries" puzzle in which Maya must ferry the gods of earth, wind, and sky over a mystical river, but cannot leave certain pairs together. 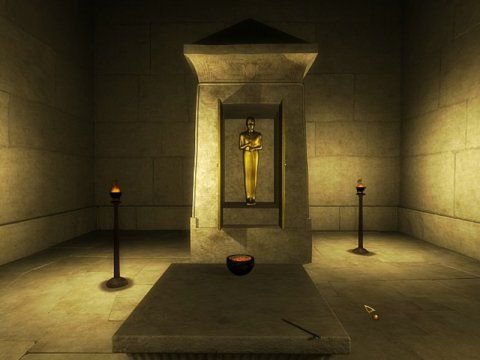 When the puzzles do manage to match the ingenuity of the setting, they merge wonderfully. The sections which take place in the alternate world of the gods are perhaps the most interesting and inventive, and work the best as the puzzles are at least justified as being direct tests. In one section, the player is challenged to correctly worship Ptah, god of the forge, by building a musical instrument. In another, Maya traverses the Book of the Dead, which is literally made of sheets of papyrus suspended in a colorful void. There she must guess the name of the guardian of the gate and cross a maze with her spiritual counterpart -- her Ka. Reaching the far side, Osiris makes his appearance surrounded by delicate reeds which slowly grow upwards from nothingness. These moments beautifully capture the setting of a mystical Egypt where the gods are real.

It should be noted that timing plays an issue in the game. These sections can range anywhere from waiting a few moments for a piece of metal to cool, to a puzzle that must be solved within a certain time-limit in order to keep Maya alive. For the most part these aren't an issue, as the game is extremely forgiving. Failure merely results in a chance to try again.

The Egyptian Prophecy visually and musically oozes with inventiveness. Its treatment of Egyptian mythology as reality produces a beautiful and mysterious world where the fates of god and men are intertwined and magicians must walk on the razor's edge between. Unfortunately, while its game design is solid and logical, the puzzles themselves don't quite live up to the rest of the production. The story told, while interesting, is fairly short. I can't see it taking more than a few days of causal play to complete it. A fascinating journey while it lasts, the puzzle design causes the whole work to fall just short of greatness.

The combination of realistic architecture, history, surrealistic gods and magic will draw you in, but the been-there-done-that take on the puzzles and the journey's short length might not be enough to hold your interest.

GAME INFO The Egyptian Prophecy is an adventure game by Kheops Studio released in 2004 for iPad, Mac, Mobile (Other) and PC. It has a Illustrated realism style and is played in a First-Person perspective. You can download The Egyptian Prophecy from: We get a small commission from any game you buy through these links.
The Good:
The Bad:
The Good:
The Bad:

What our readers think of The Egyptian Prophecy