Curse of Atlantis: Thorgal's Quest is a title I've mistakingly ignored since it was first announced by The Adventure Company. If you thought this was going to be another plain vanilla Atlantean mystery game, you've been misled by the title—just as I have been. To make matters worse, Thorgal's Quest has been falsely labeled as an action/adventure, while it is in fact a pure point-and-click adventure in every sense of the word.

Having recently seen the game in action, I can say that on the surface Thorgal's Quest looks to be one of The Adventure Company's most interesting titles. The Adventure Company must have also realized the need to correct the title of the game, as its just been renamed to Thorgal: Odin's Curse in Europe.

Thorgal follows the recent trend of 'lite' games aimed at a mainstream audience. It will take a hardcore adventure gamer probably just a few days to finish it, as the puzzles are pretty straightforward. Those of you who are not into action-adventures don't have to worry, though. While the game has you carry around a crossbow, it is used as a regular inventory item. Furthermore, it's not possible to use the crossbow to target a character directly anywhere in the game. If a guard is blocking your way, you'll have to hit some ropes that cause a structure to collapse on top of him, for example. This is done through regular point-and-click, without any danger of dying. In other words, the 'action' elements in Thorgal are merely puzzles in disguise.

The engine of Thorgal is quite similar to games like Syberia and The Longest Journey: 2D backgrounds, 3D characters, point-and-click interface, dynamic shadows, the works... One truly unique feature of Thorgal are the way the pre-rendered backgrounds have been treated with different filters and pencil strokes during post-production. This technique, combined with a beautifully dark and mysterious atmosphere, makes you feel like you're really part of a fantastical Viking world. What I like a lot about Thorgal is that it goes beyond being just a 'period piece', with the addition of some time travel elements. The sci-fi angle is introduced somewhere towards the end of the game—and it seems to blend together surprisingly well. Expect a very nice twist to an already interesting premise.

The character of Thorgal is based on the comic books of Rosinski & Van Hamme (XIII, Largo Winch). As such, some of the story is told through comic-style slideshows, which form a complete album when the game is completed. Whether the story delivers on its promises remains to be seen, but as far as production values go, this is a title with a lot of potential. The low level of difficulty of the puzzles will probably make this a low-priority game for adventure veterans, but with a wholesome dosage of originality and atmosphere, Thorgal will be a game to keep a close eye on.

Shipping for PC and PS2 on March 12, 2003 in North America. To be released by Dreamcatcher Europe in the UK, Germany, Spain, France and Italy. 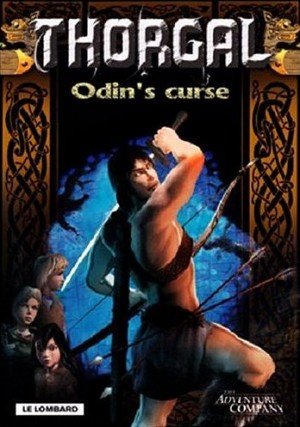