Review for Simon the Sorcerer 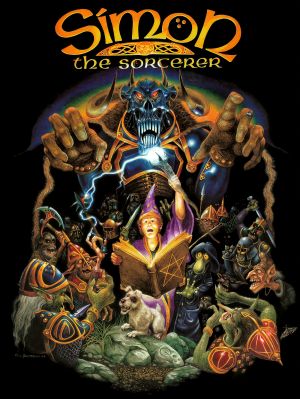 We get a small commission from any books sold.
Written by
Rob Franklin — August 5, 2004

Once upon a time in a faraway land called England, there was a small gaming company named Horrorsoft. Year in and year out, Horrorsoft had toiled over some of the finest horror adventure/RPG games known to the kingdom, games like Elvira 1 and 2, Waxworks and Personal Nightmare, celebrated for their intricate and chilling storylines, tricky puzzles and appealing graphics. Winters came and passed and the Kingdom flourished under their home-grown talent, unafraid of the mighty American Juggernauts of LucasFilm Games or Sierra On-Line. But Horrorsoft grew weary of these trifles and craved something new for its people, a game with enough guts, ingenuity and stamina to go out on its own and conquer the world. So, changing their name to Adventuresoft and donning their “SCUMM engine” hat, they set about creating probably the most British adventure game you’ll ever find. Simon the Sorcerer was born…

OK, so it didn’t conquer the world, but you’d be very hard pressed to find an adventure gamer who hasn’t heard of Adventuresoft’s prodigal son. It’s probably fairly safe to say that Simon the Sorcerer has achieved an infamous status in the gaming community, known for its nonsensical puzzles, obnoxious central character and humour that is very definitely an acquired taste. But before you start passing judgement on this game please, dear reader, remember that 1) you have heard of Simon! (Which is more than can be said for Feeble, Adventuresoft’s other hero creation) 2) He spawned not only two sequels, but a puzzle pack and a pinball game, and finally 3) Simon is probably England’s biggest adventure game star (George and Nico don’t count being American and French, even if they were created by British company Revolution).

It all started in 1993 with Simon the Sorcerer, the first game in the series, a funny little jaunt through a fantasy land drawing its influences mainly from the novels of J.R.R. Tolkien and from classic fairytales and folklore. You play Simon, an adolescent from some non-descript backwater of England, drawn to the village of Fleur de Lit by Calypso the wizard who is being held captive by the evil sorcerer Sordid. Armed with only a magic postcard and his bottomless hat, Simon has to negotiate such perils as Goblins, Dragons, and Giants in his quest to rid the land of Sordid’s terror. All pretty Dungeons and Dragonsy so far, but what sets this aside from other similar games like the King’s Quest or Quest for Glory series is that Simon is a whole-hearted parody of all this role-playing nonsense. During his travels Simon sends up everything from Dwarfs and Warrior Princesses to Gollum and Rapunzel. Nothing of the fantasy genre is left unscathed. 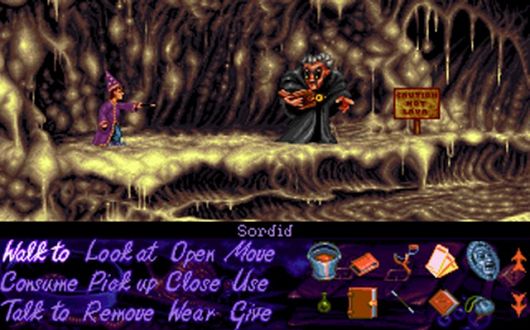 The game plays in a usual point & click style like a lot of other adventure games of that time. Traditional SCUMM commands have been replaced with different commands to give a more individual feel, although one does have to ask if the commands of "Consume," "Wear" or "Remove" are strictly necessary, when "Use" would suffice for all these. The puzzles are not tricky, and largely inventory-based. They can often seem daft, but the logic is there (if a little hidden in places). There are a handful of puzzles that will really grate on your nerves, especially when the solution involves you finding a solitary rock in the vast landscape, which happens far too often. The game does come with an in-built help system, in the form of a wise owl. You have to sit through a lot of nonsense but he can often give invaluable pointers.

As previously stated, the landscape you play in is vast. Whereas most adventure games are set in multiple towns or small zones with a few hotspots to visit on each map, Simon takes place in a vast land complete with dense forest, icy mountains, a swamp, town and craggy cliffs, all accessible from the instant you turn on the game. You start in the town of Fleur de Lit, but are soon off to discover the new land you have been brought to. The game was created in 256 colours, as was the norm back then, but Adventuresoft really pushed this to its fullest potential. Every screen you arrive at, be it forest, swamp or mountain, is sublimely detailed with the beautiful background scenario being just as important as the foreground. Each screen, necessary or otherwise, comes complete with rocks and cliffs spookily designed to look like faces and animated fauna like wolves, birds and squirrels. When you start the game, you are given a magical map that fills out as you visit new places. This is an essential piece of kit for skipping over the “filler” screens that you have to explore your way through at the start of the game because -- let’s be honest -- if you’ve seen one animated squirrel, you’ve seen them all.

Adventuresoft realised, though, that with such a sublime and detailed landscape, they would have to spend a lot of time on some music to do justice to it. The music they came up with complements the action on screen perfectly. Often with older games that I play nowadays, I’ll turn off the annoying bleeps so that I can hear the speech and then put a decent CD on. With Simon, you can’t play the game without the music, it almost feels like a travesty. The Adventuresoft folks are obviously incredibly proud of this fact as they offer a free download of the music in MP3 form for fans (visit www.simon3d.com) 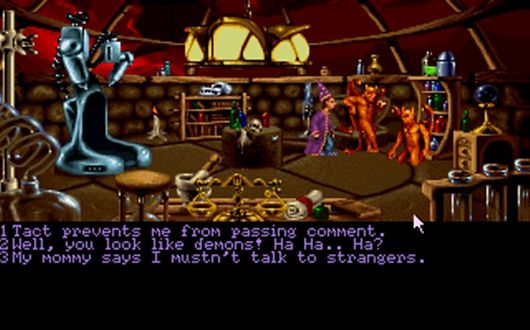 However, above all this, the shining glory of Simon is the dialogue. It is no understatement when I say that the script for this game is solid gold. The jokes just keep coming with every new person Simon meets and although you’re not always on his side, you can’t help but crack a smile at the way he voices his opinions. Simon Woodroffe’s humour is fantastically British in every way, so if you’re not a fan of Monty Python or the Discworld games/novels then this may not be the game for you. As most adventure fans know, the Discworld franchise brought out its own game a couple of years after Simon with similar humour. The major difference between the two is that while Discworld was highly criticised for simply liking the sound of its own voice too much, Simon succeeds with a funny script that doesn't constantly infringe on the overall gameplay.

The game’s transfer to CD only proves the strength of the dialogue further. Chris Barrie, known for his roles as Rimmer in the Red Dwarf TV series and Gordon Brittas in The Brittas Empire, but more recently as Hillary in the Tomb Raider movies, was drafted in to do the voice of Simon. Chris brings the character of Simon to life; all Simon’s snidey, passive-aggressive nonchalance is recreated in stunning CD quality sound. Bliss! Actually, being as the CD version dates back to 1993, the speech and dialogue can be a bit grainy, but this doesn’t detract from the humour or overall atmosphere of the game. 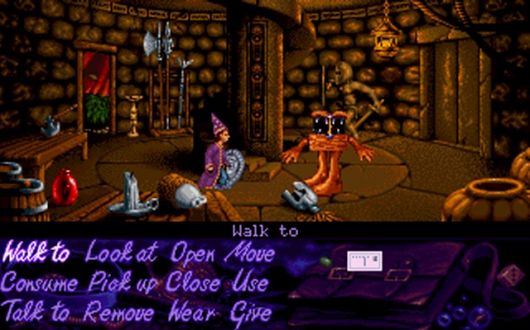 Unfortunately Simon does come with its fair share of problems, the largest being the narrative. There is an overlying story: find Calypso, destroy Sordid, save the world; unfortunately you will spend the majority of the game solving puzzles that seem to have no relevance to the overall plot. With most adventure games there are plenty of subquests that you logically have to solve in order to progress. With Simon, the plot is so vague that you can often find yourself forgetting what it is you’re supposed to be doing. The end sequence is also, sadly a little under par. After all that toiling through endless countryside, you are left with a two-minute wrap-up that merely acts as an advert for the sequel.

These points aside though, this is a terrific game that everyone should experience. Thankfully, the guys at ScummVM realised how great this game was and have given it a new lease of life, along with its sequel, in their latest version. Simon the Sorcerer has attained cult status across the world, with numerous fan sites and devotees. The series comes complete with two sequels, and an unofficial fan game in the making over in Germany. Even now I find the game a joy to play, and it seems to have hardly aged at all. For many people this game is not top five material, but if you’re a fan of both adventure games and British humour like me, then Simon the Sorcerer should not be missed.

Simon the Sorcerer is available at:

A fantastic first jaunt for the Sorcerer you love to hate and an instant classic. You won’t regret playing it.

GAME INFO Simon the Sorcerer is an adventure game by AdventureSoft released in 1993 for Android, iPad and PC. It has a Comic cartoon style, presented in 2D or 2.5D and is played in a Third-Person perspective.