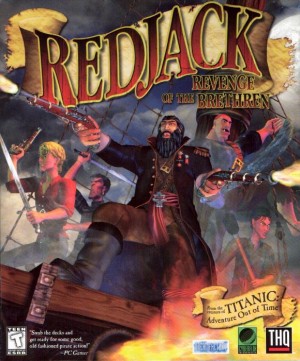 Redjack: Revenge of the Brethren, while passing itself off as a light-hearted yarn about pirates, sunken treasures, and other adventures on the high sea, is in reality a tale of tragedy in that here we have yet another promising idea for an adventure game which ultimately falls prey to a poor implementation…but we’ll get to that later.

It’s often occurred to me that the golden age of piracy would be ripe with potential for the adventure game genre. Unfortunately, with the exception of the Monkey Island series, this setting seems to have gone largely ignored thus far. Storming boldly into the breach, Redjack valiantly attempts to fill this void by offering us a swashbuckling tale of pillaging, privateering, sunken treasures, ghosts, giant squids, love, revenge and just about anything else that could be crammed into the storyline.

At the heart of this rousing tale lies your alter-ego Nicholas Dove, a plucky young lad who whiles away his carefree days in the small town of Lizard Point daydreaming of fame, fortune, and grand adventures (much like myself). Fortunately, Nick, being the preordained hero of the game, is (as we all know) destined for much greater things and soon finds himself caught in the middle of an intricate plot revolving around a long-dead pirate named Redjack and his affectionately-named cohorts, The Brethren. 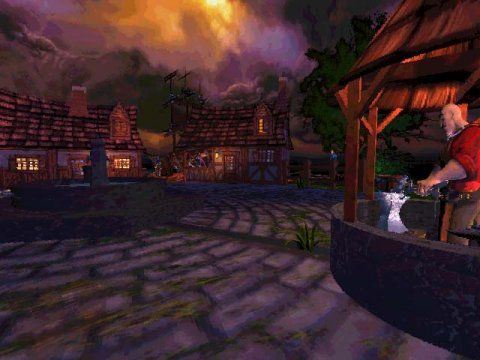 The story in Redjack is surprisingly involving, masterfully integrating all of the requisite elements of a good pirate tale, and ultimately provides the main impetus for weathering some of the game’s weaker elements. While I was somewhat disappointed that some of my questions were never quite answered to my satisfaction and a few important plot points were glossed over, overall this is definitely the game’s strongest suit.

Along with the story, the voice-work provides another of the game’s high points. The voiceovers are uniformly well-done and the conversations do an excellent job of moving the story forward and conveying the tongue-in-cheek humor that is prevalent throughout the game.

The graphics, however, haven’t aged quite as well as the rest of the game. The game utilizes a node navigation system, essentially providing you with a set of points that can be traveled between and at each point allowing you to pan a full 360 degrees horizontally and close to 180 degrees vertically. While I have no qualms with this system, the pseudo 3-D graphics at each node range from fair to homely and the low resolutions definitely give the game a dated feel. In contrast, however, the frequent pre-rendered cut-scenes are, for the most part, attractive and offset the rest of the graphics somewhat. 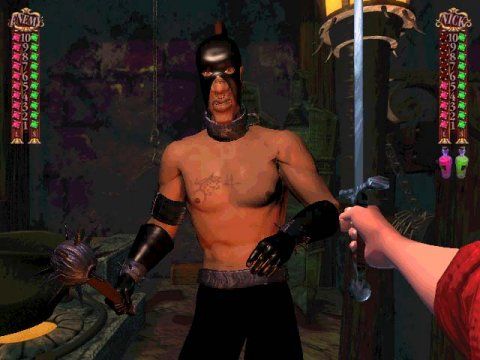 The puzzles in Redjack are likewise one of the game’s weaker points. Redjack is not a hard game by any stretch of the imagination. Likely, any seasoned adventurer will be able to breeze through any puzzle in this game with little to no flexing of his or her mental muscles.

Additionally, Redjack makes use of the “smart” cursor convention, in which the cursor changes into a hand whenever it passes over an object that can be either used or picked up. This obviously takes quite a bit of challenge out of the game, but compensates for the graphics engine, which would have likely made pixel-hunting a truly fit-inducing experience. As such, Redjack would obviously be a perfect game for beginning adventurers were it not for one thing…

In case you haven’t noticed yet, this review has taken a decidedly downward trend and, continuing with this pattern, we come to Redjack’s true Achilles’ Heel…action sequences galore. To be perfectly fair, it’s hard to picture a pirate story without the sound of cannons or the clash of steel, but we’re adventure gamers, dammit, and I refuse to believe that there isn’t a creative way to get around such things without subjecting us to third-rate twitch-fests. 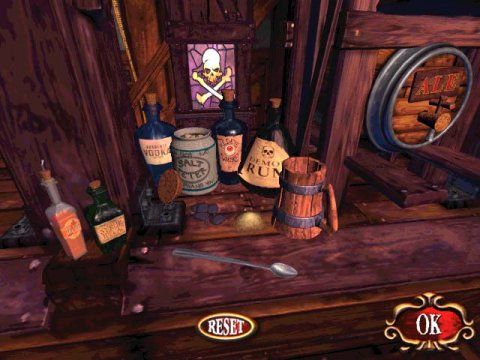 Having said that, the action sequences in Redjack aren’t especially difficult and shouldn’t be an impasse for anyone who possesses fair to moderate motor skills. While it seems that the designers of the game actually put some thought into designing some of the action sequences (the sword-fighting in particular) their implementation still feels somewhat clumsy and their inclusion ultimately adds little more than padding to make the game feel longer (without the action sequences, an experienced gamer could probably finish the entire game in one or two sittings).

So the question now becomes, “Can I recommend Redjack?” Were it not for the action sequences, I could easily forgive the game its other shortcomings. Yet despite the utter annoyances of the action sequences, I couldn’t quite bring myself to dislike the game. Perhaps the story was too compelling, perhaps the characters were too charming, or perhaps it stems from an unhealthy fascination I had with the Pirates of the Caribbean ride at Disneyland when I was a child. 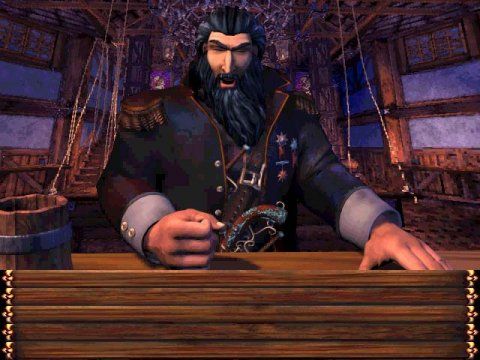 As I mentioned at the beginning, Redjack is ultimately a tale of tragedy. When it was over, I was left with a profound sadness, because, while I have to admit that I enjoyed it despite its faults, the game could have been so much better, but such is life.

If you’re an adventure purist or just reflex-impaired, stay clear. However, if you can overlook the game’s substantial faults and have any interest in a good pirate adventure, then Redjack is definitely worth your while. So if you’re so inclined, grab your cutlass and a bottle of rum (it might help with the action sequences) and let’s all give a hearty toast to pillaging, plundering, and the eternal hope that one day we might get the pirate adventure we truly deserve.

A missed opportunity, but an entertaining romp nonetheless if you can look past the shortcomings.

GAME INFO RedJack: Revenge of the Brethren is an adventure game by Cyberflix released in 1998 for Mac and PC. It has a Stylized art style and is played in a First-Person, Third-Person perspective.

What our readers think of Redjack